Everton will be hoping to progress into the semi-finals of the Capital One Cup for the first time since 2008 when they play in-form Sky Bet Championship side Middlesbrough at the Riverside Stadium on Tuesday night.

Both sides had to come through penalty shoot-outs to reach the quarter-finals, with Everton beating Norwich City and Middlesbrough surprising Manchester United in the last round.

Middlesbrough have won just twice in their last 13 matches against the Toffees, but Boro have won the last two League Cup ties against Everton, beating them on penalties in the fourth round in December 2003 and 1-0 in the third round in October 2005.

Just three games stand between Everton and a place in February's final at Wembley, and with Arsenal, Chelsea and Manchester United all being knocked out of the competition in the earlier rounds, this year's League Cup presents Everton with a realistic chance of ending a 20-year wait for silverware.

Everton have reached the quarter-finals for the first time since the 2007-08 campaign, however they have yet to impress in the competition this campaign. The Toffees had to come from behind to beat League One side Barnsley and Championship team Reading, before beating Norwich City on penalties in the last round.

Similar to the League Cup this season, Roberto Martinez's side did not make it easy for themselves against Bournemouth on Saturday, when they had to settle for a point after squandering the lead twice, but they will be eager to bounce back against Middlesbrough on Tuesday. 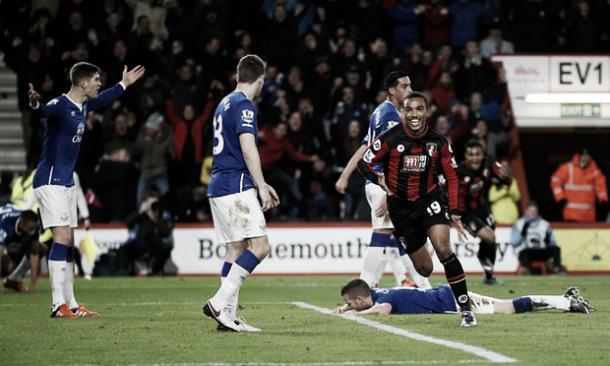 Junior Stanislas scored an equaliser for Bournemouth in the 96th minute. (Image: Reuters)

Having said that, the 3-3 draw against Bournemouth extended their unbeaten run to four league games and Everton have been in strong goalscoring form during this period.

The Toffees have scored 14 goals in their last four games, with Romelu Lukaku scoring five in four matches, while Ross Barkley has three in his last two appearances.

However, they have struggled defensively this season, keeping just one clean sheet in their last 10 outings in all competitions. In fact, they have conceded in each of their last seven League Cup games away from home.

Middlesbrough have proved that they have the potential to cause an upset against Premier League opposition after they beat Manchester United in the last round. After holding Louis Van Gaal's side to a goalless draw at Old Trafford after extra-time, the Championship side won on penalties.

They also forced Liverpool to penalties in last year's Capital One Cup, which they eventually lost 13-14, before beating Manchester City in the FA Cup earlier this year. 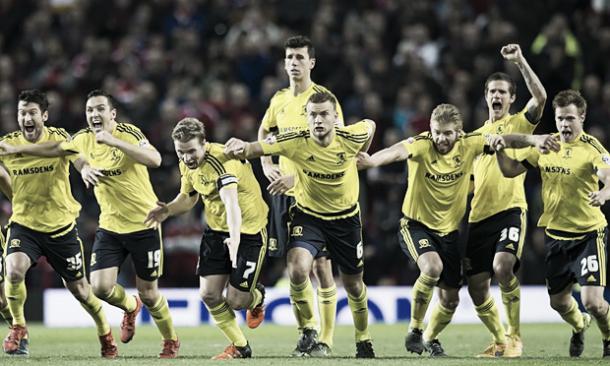 Middlesbrough players celebrate after beating Manchester United in the last round. (Image: Reuters)

The 2004 League Cup winners head into the tie sitting second in the Championship, having won their last two matches and three of their last four, including a 2-0 victory over Huddersfield Town on Saturday.

Aitor Karanka's side have a very good defensive record this season, keeping nine clean sheets in 18 league games, conceding just two goals at the Riverside, but their defence will be put to the test by Everton. Middlesbrough also pose an attacking threat, having scored 27 goals in the league this season.

Everton could be without midfielders James McCarthy (groin) and Gareth Barry (shin), after both picked up injuries in their draw with Bournemouth at the weekend.

Leighton Baines could be in line to make his first appearance of the campaign following an ankle injury. Joel Robles, who has started in goal in every match in the League Cup so far this season, is likely to replace Tim Howard again, while Phil Jagielka, Bryan Oviedo, Tony Hibbert and Steven Pienaar all remain sidelined.

Everton academy graduate Adam Forshaw could return to Middlesbrough's starting line-up after coming off the bench against Huddersfield at the weekend, following a one-month absence through injury.

The joint-top scorer in the League Cup this season, Cristhian Stuani could be handed his first start since recovering from an injury sustained on international duty. Tomas Kalas is an injury doubt, after missing the Huddersfield game, but there are no fresh injury concerns for Aitor Karanka to complentate.

Liverpool vs Everton preview: How to watch, kick-off time, team news and predicted line-ups 7 days ago

Michael Keane: 'We want to make our own history' 14 days ago