Everton have reached the semi-finals of the Capital One Cup for the first time since 2007-08 after a 2-0 victory over Middlesbrough at the Riverside Stadium.

First-half goals from Gerard Deulofeu and Romelu Lukaku put Everton in control at half-time, before the Toffees stayed resolute in the second-half to move within just a two-legged tie of Wembley and a place in the final.

With Arsenal, Chelsea and Manchester United all being knocked out of the competition in the earlier rounds, this year's League Cup presents Everton with a realistic chance of ending a 20-year wait for silverware.

Everton's intent of cup success was highlighted through Roberto Martinez's team selection, with the Toffees making just three changes from the 3-3 draw with Bournemouth on Saturday.

James McCarthy was replaced in the starting line-up by Tom Cleverley, after the midfielder picked up a hip injury against Bournemouth. Leon Osman replaced Arouna Kone on the left-hand side, while Joel Robles retained his place in goal for the League Cup campaign.

Middlesbrough, meanwhile, made six changes from the side that defeated Huddersfield Town at the weekend.

Everton knew Middlesbrough had the potential of a cup upset after they knocked out Manchester United in the last round of the competition, and after weathering a brief early Middlesbrough storm, the Toffees went ahead.

It took 17 minutes before either goalkeeper was tested, with Robles turning Stewart Downing's curling free-kick around the post. From the resulting corner, the home supporters were on their feet as Christian Stuani bundled the ball into the goal, but the referee blew for a foul on Robles.

Minutes after Middlesbrough had the goal disallowed, Everton were ahead through Gerard Deulofeu.

Deulofeu picked the ball up just inside Middlesbrough's half, before beating two defenders and placing a brilliant low finish past Tomas Meijas and into the bottom corner.

Everton doubled their lead just eight minutes later, with Deulofeu this time the provider. The in-form Spaniard produced a series of stepovers, before delivering a cross for Lukaku, who headed past the Boro goalkeeper to score for the fifth consecutive game. 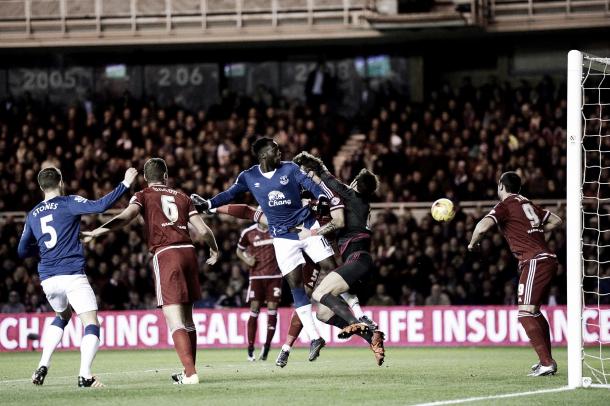 However, Everton knew that two goals can be quickly overturned following Bournemouth's two comebacks against the Toffees on Saturday, and Middlesbrough showed attacking intent in the final 15 minutes of the first-half.

Kike saw his attempted lob drift just wide of the far post; while Stauni's low drive did not trouble Robles after a powerful run by the Boro striker to leave Everton in control at half-time.

Everton see the job through

Middlesbrough started the second-half brightly, but, similar to the first half, Everton soaked up the pressure and defended well. Robles produced a decent save to keep out Downing's powerful 25-yard strike just before the hour mark, which turned out to be the closest the Championship side came to scoring.

Everton continued to look to extend their lead and looked dangerous on the counter-attack. Ross Barkley saw his shot deflected behind for a corner in the 63rd minute, after playing a neat one-two with Deulofeu.

Joel Robles would have been grateful to see Stauni head just over the crossbar in the 69th minute from eight yards out; a goal at this point would have set-up a tense and anxious final 20 minutes for the Blues, but Everton stayed calm and composed. 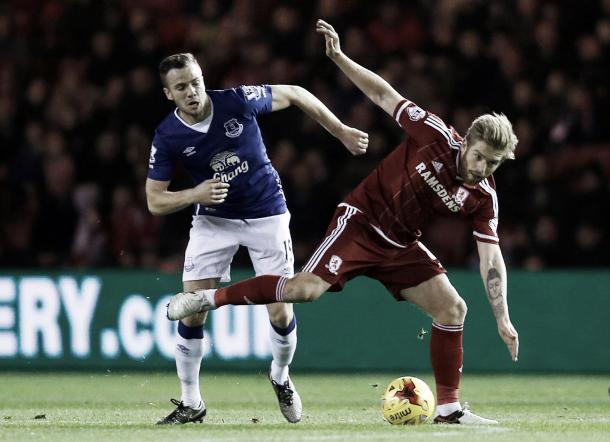 Everton supporters will have been pleased to see left-back Leighton Baines make his first appearance of the season, following ankle surgery, after the England international replaced Brendan Galloway in the 73rd minute.

The Toffees came close to extending their lead in the 85th minute but substitute Kevin Mirallas' strike produced a good reaction stop from Meijas to keep the score at 2-0.