Arsenal have been drawn against fellow Premier League side Sunderland at home in the third round of the FA Cup.

The Gunners have been holders of the cup for the past two seasons and currently hold the record for the most FA Cup trophies with 12. Sunderland on the other hand have won the cup twice, the first coming in 1937 and the second came in 1973.

Arsenal reclaimed the FA Cup last season in an emphatic 4-0 win against Aston Villa in the final, whereas Sunderland reached the fifth round before losing to FA Cup giant killers Bradford City, who had also knocked out Chelsea the round before.

The duo have faced one another eight times in this competition, with the first encounter coming in 1893. The northern outfit ran out 6-0 winners at home and have won three of the seven meetings since, with the most recent in 2012. Arsenal, in the middle of their famed nine-year trophy drought, succumbed to defeat at the Stadium of Light courtesy of a deflected Kieran Richardson effort and an Alex Oxlade-Chamberlain own-goal. In total, 26 goals have been scored across these fixtures. 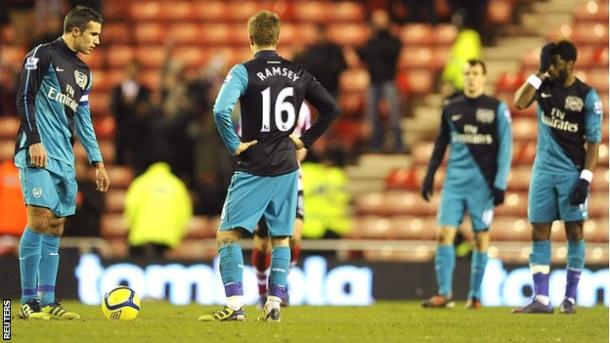 Across all domestic outings however, Arsenal have come out on top more often. Arsenal have triumphed over their Premier League rivals on 59 occasions compared to Sunderland's 49 wins. The pairing only met on Saturday at the Emirates, when the Gunners ran out 3-1 winners. Joel Campbell scored his second Premier League goal to open the scoring before an Olivier Giroud own-goal saw the visitors level. The Frenchman soon amended for his error by netting in his side's second before Aaron Ramsey sealed all three points.

Both clubs will be hoping to advance to the fourth round of football's oldest cup competition and this fixture will be played between the 9th and the 11th.

The Warmdown : Aubameyang leads comeback as Arsenal progress to the last 16 a day ago

Nicolas Anelka: 24 years on 4 days ago

Kieran Tierney: The positives of his return 4 days ago

Bellerin or Cédric: Who should Arteta's first choice be? 5 days ago

Should Arsenal Stick or Twist on Dani Ceballos? 8 days ago

Benfica 1-1 Arsenal: Bukayo Saka scores to put Arsenal in the ascendancy on a frustrating night 9 days ago
//