Manchester City centre-back Eliaquim Mangala has publicly stated his belief that the Citizens have nothing to fear ahead of Monday's draw for the Champions League knockout rounds.

Their exciting 4-2 home victory over Bundesliga side Borussia Mönchengladbach on Tuesday evening meant they leapfrogged Serie A giants Juventus to top Group D, so will avoid the majority of European powerhouses - such as Barcelona, Bayern and Real Madrid - that have knocked them out of the tournament in recent years.

Mangala admitted though, that defensively, City need to tighten up - to avoid conceding so many goals. Gladbach found pockets of space and were able to punish their hosts to good effect in the opening 45 minutes, despite City themselves enjoying large spells of possession on the ball.

Well-taken strikes between Julian Korb and Raffael helped André Schubert's men grab the lead before the half-time whistle, and questions were certainly being asked of the sky Blues' defensive shortcomings. Since their goalless draw away at Villa Park, Manuel Pellegrini's men have conceded eleven goals in six games (all competitions), which is less than ideal for a team of their quality, regardless of the injury issues they've had to deal with recently.

In Vincent Kompany's absence, they look less assured as a defensive unit, and although Nicolas Otámendi has settled into life in England well, the centre-back pairing of Martin Demichelis and Mangala is unable to thwart counter-attacking sides who break at speed with purpose; just like Liverpool and Stoke have both done recently with successful results. 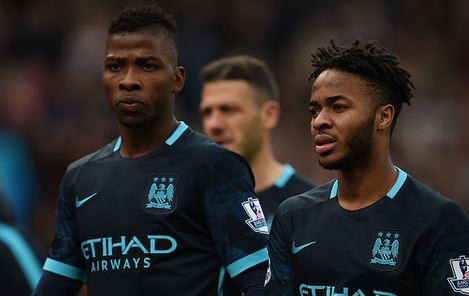 As quoted by Manchester Evening News, the 24-year-old Frenchman said they as a team, need to "learn" from their first-half display, to "keep going, keep working" just like they did after the interval.

Time for City to step up

Despite finishing top of the group, Mangala admitted they collectively know they have to improve to stay in the competition.

"If we start like we did in the second-half, we can beat some top teams; it depends on us."

The Warm Down: City leave it late to survive Wolves scare 21 hours ago

The Warm Down: City take first step in Round of 16 7 days ago

The Warm Down: Gunners fall short to Sterling bullet header 9 days ago

Arsenal vs Manchester City Preview: How to Watch, Kick-Off Time, Team News, Predicted Lineups and Ones to Watch 11 days ago

The Warm Down: Manchester City battle hard to knick win at Goodison Park 14 days ago