Manchester United travel south to AFC Bournemouth in the hope of bouncing back from a poor defeat in midweek but will find it difficult to do so, with the Reds without nine first team players for the Premier League clash.

Bastian Schweinsteiger was handed a 3-match ban by the Football Association on Thursday following his elbow to Winston Reid against West Ham United last weekend, while Chris Smalling and Matteo Darmian (hamstring) picked up injuries earlier this week. Darmian was forced off on Tuesday night as United were knocked out of the UEFA Champions League thanks to a 3-2 defeat to Vfl Wolfsburg. Cameron Borthwick-Jackson replaced him at left-back and may have to do so again. 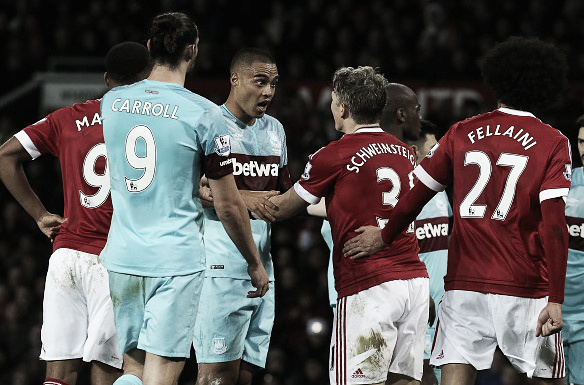 United without nine for Bournemouth trip

Meanwhile midfielders Morgan Schneiderlin (hip/thigh) and Ander Herrera (hamstring) are both out, although van Gaal expects the pair to return before Christmas. Captain and main striker Wayne Rooney is also unavailable, with an ankle injury.

United have the third most injuries in the Premier League at the moment, while Saturday's opponents Bournemouth have the most, with 11. Former-United striker Joshua King has concussion while star players Callum Wilson, Tyrone Mings and Max Gradel are all injured for at least a few months, with the possibility of not returning this season.

The Red Devils need a victory on Saturday evening to appease an expectant fanbase. The Old Trafford faithful, who have generally shown a patient side in the past, are tiring of monotonous performances while van Gaal refuses to alter tactics to improve on the drab viewing.

Despite falling out of the Champions League and League Cup, United have a slim chance of making this a title-winning season, sitting three points off the top of the table before Christmas. They also have a chance of winning the Europa League for the first time since its rebrand. Having finished third in their Champions League group, van Gaal's side are automatically into the Round of 32.

Henderson 'is ready' for Manchester derby, says Solskjaer 3 hours ago

Manchester City vs. Manchester United: Four things to look out for ahead of the Manchester derby 3 hours ago

The Warmdown: Manchester United play out a goalless draw in South London a day ago

Chelsea vs Manchester United Preview: How to watch, kick-off time, team news, predicted lineups, ones to watch 5 days ago
//