Manchester City looked to use their Champions League triumph in midweek as a stepping stone to some much-needed Premier League success as they entertained managerless Swansea City in one of the day's 3pm kick-off's.

Goals from Ivorian duo Wilfried Bony and Yaya Touré, sandwiched by a late leveller from subsitute Bafetimbi Gomis, meant the hosts prevailed in a hard-fought victory over a Swansea side who were lively, energetic, and unlucky not to come away with at least a point - if not for Joe Hart's excellent string of saves throughout.

Manuel Pellegrini made four changes to the side that lost 2-0 away at Stoke last weekend, with Yaya Touré and Jesús Navas amongst the returning faces to the starting XI - whilst Kevin de Bruyne was presumably rested, starting from the substitutes' bench.

The visitors could have found themselves ahead with a two-goal cushion after just twenty minutes, with some brilliant approach play hurting the Citizens in the final third. Gylfi Sigurdsson was unsurprisingly at the heart of things from a creative midfield position, initially feeding Wayne Routledge with a one-on-one opportunity, but the English winger was thwarted by a good reaction stop from Joe Hart.

Then minutes later, the Icelandic midfielder had a strike of his own. It stung the gloves of Hart, who was able to parry the danger as Pellegrini's men held their breath in-front of a relatively quiet home crowd on a rainy afternoon at Eastlands.

Jesús Navas almost scored an excellent solo goal, but for a fortunate deflection curling the ball away for a corner-kick. After receiving the ball on the flank, the pacey Spaniard weaved his way past Neil Taylor - who slipped in Navas' wake - before shaping to shoot, which looked threatening, but he'd won a set-piece in the process.

Bony breaks deadlock against former side

From the resulting set-piece, the deadlock was broken. After a lively start from the Swans, they found themselves behind with a lead to overturn within a flash. Navas' delivery was teasing, and Wilfried Bony was lurking inside the box with centre-back Ashley Williams his marker. A quick movement to the side, the Ivorian sped past the captain and connected well with the ball, heading home with Lukasz Fabianski seemingly helpless to divert his effort away from goal.

A subdued celebration followed, with Bony netting his seventh goal in all competitions this term - despite his injury issues since his switch from the Liberty to the sky Blues at the start of the calendar year.

It was harsh on Swansea, given their positive start to proceedings. Defensively they'd made one mistake, and were consequently punished for it - just highlighting how quickly things can change in football.

Fabianski had to be quick to react with a save as Touré's power and agility was too much for the Swansea backline to contend with, as he shrugged off challenges as though they were not there, before his eventual shot lacked elevation to fully test the former Arsenal man in-between the posts.

Neil Taylor was given the game's first booking by referee Robert Madley for a late sliding challenge on Navas, as the Spaniard looked to get past the fullback once more.

With the clock ticking down on the first-half's action, Swansea had their last chance to equalise. Andre Ayéw did excellently to hold up play, and eliminate two players with a neat skill. A quick exchange of passing saw the ball flicked up dangerously into the box, but Nicolas Otámendi made an excellent clearance to hook the ball away to safety.

The half-time whistle blew and even though they were ahead, City were fortunate - they weren't particularly convincing.

Game still up for grabs

As the second-half began, the hosts made their first substitution of the game.

Raheem Sterling, who was tasked with more defensive-minded work than his usual attacking exploits, was replaced by Fabian Delph to help shore up the midfield trio and improve their ball retention.

Both Fabianski and Hart were forced into making good saves early in the second 45. Touré saw his free-kick strike acrobatically saved by Fabianski, whilst Hart made another excellent stop to deny Sigurdsson's close-range effort.

Bony was next in the referee's book for a late sliding challenge on South Korean midfielder Ki Sung-Yeung. The powerful Ivorian shook hands with his former teammate, but had no complaints with Madley's decision to give him a booking - his first in the League this term.

Then there was a stoppage in play just before the hour mark, after Bacary Sagna was penalized, and also received a yellow card for a high boot into Routledge's face. He argued with the referee suggesting that it was accidental, he didn't see the player, and it was his first offence of the game. The physios rushed onto the field of play, treated the winger, who hobbled off as the free-kick was lined up between Sigurdsson and Williams.

Hart was alert to the danger, parrying Sigurdsson's swerving effort away to safety.

The visitors smelt blood, City looked vulnerable on the counter-attack and the visiting supporters were eagerly anticipating an equaliser on the cards. The noise levels were cranked up a few notches as Swansea looked dangerous going forward, and would have been ahead if not for the goalkeeping heroics of Hart on more than one occasion. David Silva was given a warm round of applause from the hosts as de Bruyne was introduced with 20 minutes to play, as they went in search of the killer goal to seal the three points.

Leon Britton and the ever-present Wayne Routledge were replaced for Jefferson Montero and Modou Barrow as Swansea meanwhile, looked for the all-important leveller. Eliaquim Mangala was shown yellow for a cynical tackle on Barrow just moments after he came on, as tempers began to flare with both sides looking to score.

Bafetimbi Gomis, who lost his place in the team following a disappointing run of performances on a personal level, was a man with a point to prove.

Coming on with ten minutes or so to play, the experienced Frenchman had an instant impact as the visitors had the ball in the back of the net - but it was ruled as an offside call..

Time for some drama

Swansea edged ever closer to the much-deserved equaliser, and within a flash, they grabbed it.

Federico Fernandez' excellent long-range pass set up Gomis, who was too quick for Mangala, and rifled the ball past Hart - who was helpless to stop the bullet flying goalwards into the net. 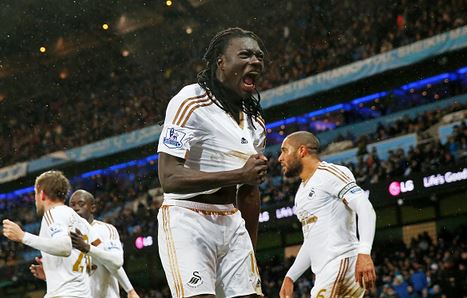 The game had burst into life, and there was another twist in the tale. City were minutes away from dropping yet more points in the race for top spot in the League - but the newly-crowned African Footballer of the Year had other ideas.

A fortunate deflection meant the ball sat up nicely for Yaya Touré, who connected with the ball perfectly to curl an effort into the bottom corner of the net - despite Fabianski's dive. 2-1 up, City held firm despite some late pressure for the final two minutes of stoppage time to retain top spot in the Premier League this weekend.

The Warm Down: City take first step in Round of 16 a day ago

The Warm Down: Gunners fall short to Sterling bullet header 4 days ago

Arsenal vs Manchester City Preview: How to Watch, Kick-Off Time, Team News, Predicted Lineups and Ones to Watch 6 days ago

The Warm Down: Manchester City battle hard to knick win at Goodison Park 8 days ago

Manchester City vs Tottenham Hotspur Preview: How to watch, kick-off time, team news, predicted lineups and ones to watch 14 days ago

The Warm Down: City sink the Swans 15 days ago