Arsenal came away with a 2-0 win against Aston Villa on Sunday evening, with goals coming from Olivier Giroud and Aaron Ramsey.

It was Aston Villa who created the first opportunity of the match. Scott Sinclair received a cross-field pass before he cut inside and stung the fingers of Petr Cech, who equals David James' Premier League record of most clean sheets (169)

Just a minute later Arsenal took the lead. Theo Walcott burst past Alan Hutton into the box before getting idioticly hawled down from behind by Hutton.

After a bit of confusion, referee Kevin Friend awarded a penalty, which Giroud calmy dispatched.

Though Arsenal had the lead, they couldn't make any further headway for much of the half. Arsene Wenger's side dominated the ball but were failing to craft clear goalscoring opportunities.

However, as soon as they did create, the Gunners scored. After Aston Villa gave the ball away Arsenal countered at pace, Walcott played in Mesut Ozil, and with Villa defenders nowhere to be seen, Ozil simply squared the ball back to Ramsey who dispatched his effort comfortably. 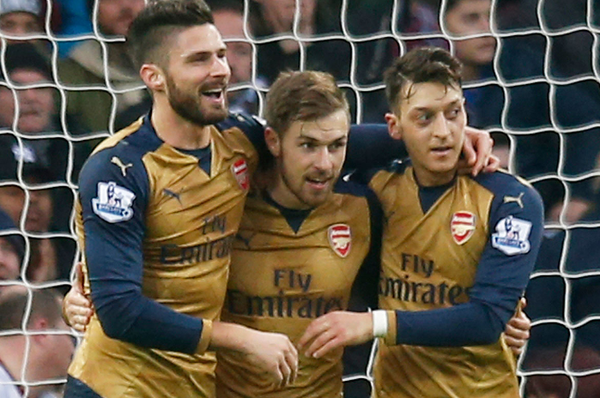 Arsenal stumble in the second-half

The Villans almost pulled a goal back just after half-time. Hutton broke forward down the right and lifted in a cross for Rudy Gestede but the striker headed wide.

Arsenal were wobbling and Sinclair really should have got a goal back for Aston Villa.

Once again the Villans broke down the right-wing, Hutton delivered a cross to the former Swansea man but he couldn't get over the ball to head it in as ball flew harmlessly over the bar.

Leandro Bacuna was next player to knock on Arsenal's door. After poor positional play by Hector Bellerin, Bacuna found himself in acres of space, but his curled effort from distance soared narrowly over the bar.

The Gunners weathered the storm to secure the three points which see them go top of the Premier League.

The defeat leaves Aston Villa still adrift at the bottom of the table.

Willian's Revival: is the Brazilian finally getting back to his best? 21 hours ago

The Warmdown : Aubameyang leads comeback as Arsenal progress to the last 16 4 days ago

Nicolas Anelka: 24 years on 7 days ago

Kieran Tierney: The positives of his return 7 days ago

Bellerin or Cédric: Who should Arteta's first choice be? 8 days ago

Should Arsenal Stick or Twist on Dani Ceballos? 11 days ago
//