First half goals from Branislav Ivanovic and Pedro gave Chelsea a half time lead before a penalty from Oscar extended the lead to three goals. A Fabio Borini tap in gave Sunderland fans something to cheer about but it wasn't enough to spark a comeback.

The name of former manager Jose Mourinho rang around Stamford Bridge in the opening stages, however Branislav Ivanovic responded with a powerful header from a Willian corner to give the Blues a 1-0 lead. Just eight minutes later and Pedro doubled Chelsea's advantage, as the Spaniard lashed the ball in from eight yards following a blocked cross from Ivanovic.

25 minutes in and Oscar had a chance to extend Chelsea's lead further, as he drifted wide of the Sunderland defence. However his shot was stopped by the leg of Costel Pantilimon. Diego Costa failed to convert a great chance 10 minutes before the break after a period of short, quick passing led to him firing over from just inside the box.

Both sides exchange quick-fire goals after the break

The Blues were rewarded with a penalty just three minutes into the second half after Willian was fouled by Pantilimon, as he attempted to move past the 'keeper. It was Oscar that stepped up to take the penalty and he calmly converted into the right of the goal to make it 3-0. 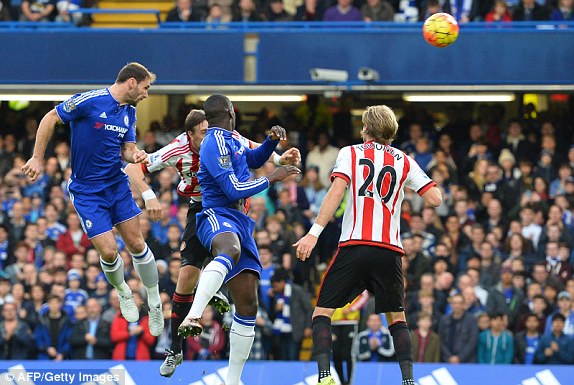 Fabio Borini gave Sunderland a lifeline out of nowhere as the former Chelsea player converted from a Jermaine Defoe free kick not long after Oscar had extended Chelsea's lead. The Black Cats continued to put pressure on last season's champions as Borini fired another chance just wide of the Chelsea goal. It was then Defoe who squandered a chance for Sunderland after he failed to convert following a downward header from Kurt Zouma.

Sunderland's spell of pressure came to an abrupt end and shortly after Oscar's effort from the outside of the area hit the side netting following a neat passage of play. Cesc Fabregas and Diego Costa made way for Chelsea for Loic Remy and John Obi Mikel, and received a chorus of boos from the Chelsea support as they left the field.

Chelsea kept the pressure on Sunderland towards the end of the game but they could not grab another goal to make it 4-1. The Blues put in one of their better performances this season albeit against a poor side. Guus Hiddink's new squad showed him that, if allowed freedom, they can play attacking football. The victory moved Chelsea up to 15th in the league and they will now be hoping to string together a few victories.