After a month and a half without a win, a run which lasted a remarkable eight games, things were looking bleak for Manchester United and Louis Van Gaal.

The calls for the manager's head were heard worldwide, with the hashtag #LVGOUT on Twitter particularly popular amongst fans. The rumors about the Dutchman's future were in full swing, with many British papers reporting that Jose Mourinho was being lined up to replace him.

Even the notoriously calm and confident Van Gaal seemed to lose his cool, storming out of his press conference after accusing journalists of making up lies and attempting to get the Dutchman fired.

In short, the club was in disarray. Manchester United seemed to be getting themselves into the same mess they had encountered just two years earlier, under David Moyes.

However, Van Gaal has remarkably done what his doomed predecessor failed to do: turn things around and bring back optimism to the club. Van Gaal decided to drop his (in)famous philosophy of possession-oriented football, and adapted a more defensive, counter-attacking style of play.

This switch in tactics has worked wonders for the team, and after eight games without a win, United have won five on the bounce. More importantly, they now resemble a side looking to score goals and take the game to the other team.

Wayne Rooney has miraculously regained his goalscoring form and, after an absolutely dreadful 2015, the England skipper has netted five of his side's seven goals in the new year. More importantly, Rooney looks energetic and is showing glimpses of past versions of himself.

This benefits both United and Rooney himself, as he prepares to lead his country into Euro 2016. His goalscoring run may even silence some of the critics who were recently calling for Jamie Vardy and Harry Kane to start over the United and England captain.

All is not sunshine and butterflies at Old Trafford, though. Winning the last four games has merely papered over the cracks that are so clearly present in this United team.

The team is still lingering outside the top four after spending a record amount of money for the club, and while beating Liverpool at Anfield has put back some smiles on United fans' faces, the reality is that this United side is still in a crisis.

Van Gaal's team should be challenging for the tile alongside Arsenal and Manchester City, not competing for the top four with Tottenham Hotspur and Leicester City. In fact, some would go as far as saying that the board need to seriously consider sacking Van Gaal at the end of the season if his side fail to finish in the top three.

In terms of quality this is one of the worst Premier League seasons in recent history, and without a doubt, the winner of the league will be regarded as poor in comparison to, say, the last five to ten league winners. No team has been able to string together a decent run of results, and the fact that Leicester City are joint top leaders tells the whole sorry story.

That being said, United should be much higher up the table than fifth and seven points behind first. Sir Alex Ferguson would have won this league title by March if he was manager, and while no one comes close to the legendary coach, surely a manager of Van Gaal's stature should be faring much better than the Dutchman is right now.

The board cannot trust this man with any more money, because LVG has spent enough money to be at least challenging for a trophy. This season, I can't see him winning anything.

A big month awaits Van Gaal and his troops. After hosting Southampton in the league, and visiting Derby County in the FA Cup, the Dutchman faces possibly the most important six games in his United tenure.

The visit of Stoke City presents a dangerous task. The Potters have been a bogey side for the big teams this year, and if United are to climb back into the top four and finish the season strongly and respectably, then this is a game they need to win.

Next on the agenda comes Chelsea, who even after the sacking of Mourinho and the hiring of Guus Hiddink, continue to struggle. However, this is still a huge game for United, who have failed to beat Chelsea in their last seven meetings. There will be no better time to end this poor record then this game, as their rivals continue to struggle.

United then travel to relegation-threatened Sunderland. While on paper, a win may seem straightforward, the Black Cats are a dangerous side on the break, so United will need to be wary of the pace of Jermain Defoe and co.

After that, United's Europa League campaign begins, as the Red Devils take on FC Midtjylland of Denmark. Again, it may seem like an easy win for United, but after the disaster with their "easy" Champions League group, United must be cautious not to slip on another potential banana peel.

Following the return leg of this tie at home, United return to domestic action for United's biggest test of the month, and maybe even of the season: Arsenal at home. The Red Devils conclude February by welcoming the Gunners to Old Trafford.

By this time, United could be back in the top four, and a win against the old enemy could reignite a late title charge. However, a loss to Arsenal would surely mean another year without the title for United. 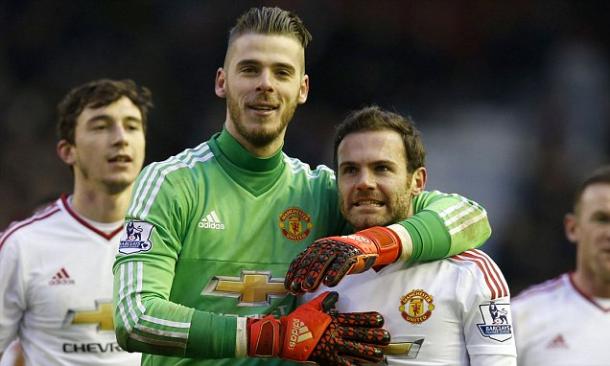