Both Southampton and Sunderland drew with late goals to still remain in search for their first win of this season’s Premier League.

Wearside striker Jermain Defoe opened the scoring after smashing home from the penalty spot, which came about after he was brought down by Jose Fonte in the box.

The hosts rattled young Jordan Pickford in goal as he was at fault for the equaliser, allowing Jay Rodriguez’s long ball found its way under his body.

After selling one of their top strikers Graziano Pelle during the summer break - leaving Southampton without a presence at the top of the pitch - the hero of the day was Rodriguez who came off the bench at half-time.

It was the Saints who started very threateningly to the Black Cats' goal, after almost taking the lead just inside 10 minutes.

Matt Targett’s spectacular delivery from the left was flicked into the path of Dusan Tadic who was 18 yards out. He cleverly brought the ball under control before unleashing a half-volley that looked destined for the top corner but went inches wide.

The hosts went close again second later as striker Charlie Austin, who has made his first appearance this season, snapped the ball from 25-yards out but Pickford made a timely save to palm it round the post.

As Saints continued to break down Sunderland’s defence - content on sitting and defending deep in their half - the Blacks Cats did have a ew spells were they looked to threaten. In the 25th minute as Patrick van Aanholt precise angle shot found Lamine Kone at the back post, who was six yards out, though he headed the ball wide.

It was a game of two halves for both teams as they continued to grow in frustration going into the break, which brought no changes from either side.

Spring in their step

The Saints piled on the pressure to break down Pickford and the Sunderland defence, calling him into action to save the day to keep it level.

Manager Claude Puel made his second change of the game to bring on Rodriguez from the bench in replace of Austin. While the hosts continued to threaten the Black Cats, the breakthrough was at the other end of the pitch via the penalty spot.

Sunderland substitute Jeremain Lens, with ten minutes left, made the move down the right-hand side to send in a low cross towards Defoe, who went down to the ground after trying to turn away from Fonte.

Referee Lee Mason pointed to the spot almost immediately, much to the frustration of Fonte, and Defoe confidently stroked home the spot-kick into the top corner.

However, with five minutes left, Pickford was finally broken down. When attempting to stop Rodriguez’s shot from 20 yards, the well struck effort found its way under Pickford's body to send the home fans into a frenzy as both teams had to settle for the point.

Where would Southampton be without Danny Ings? 3 hours ago 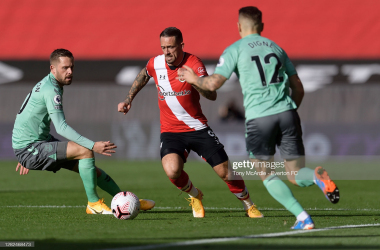 Everton vs Southampton preview:&nbsp;How to watch, kick-off time, team news, predicted lineups, and ones to watch 8 days ago

Southampton 1-2 Wolverhampton Wanderers: Wolves come from behind to condemn sorry Saints 21 days ago

Wolverhampton Wanderers vs Southampton preview: Both sides look to extend their FA Cup run&nbsp; 25 days ago