But, that's it from me, I've been James Eagles, thank you very much for joining me tonight. See you again soon.

The other score tonight:

So, Southampton advance to the last four for the first time in 30 years. For Arsenal though, it's another disappointing performance in this competition. Will Arsene Wenger be too worried? I wouldn't think so.

But, as bad as Arsenal were - especially in the first half - Southampton looked very sharp. Boufal terrorised the defence and Sims looked superb when he entered into the fray.

90+1: CHANCE! Maitland-Niles relinquishes possession to Hojbjerg, but his shot is beaten away by Martinez. Four minutes of added time.

87: Brilliant by Sims! He tears through the Arsenal defence before trying to square for McQueen, but Maitland-Niles makes a crucial intervention.

87: It's cleared for another corner. Which is claimed at the second attempt by Forster. That looks to be it for a deflated Wenger.

86: Free-kick to Arsenal. Xhaka to take.

84: Martinez makes a fingertip stop to deny Sims. The shot may have been going just wide.

83: Iwobi's well-struck shot is easily dealt with by Forster.

83: Good cross by Oxlade-Chamberlain. Holding contests for the ball and it's put out for another corner.

82: Arsenal with a succession of corners as they look for a way back into the tie.

81: Now Lucas is booked for dissent after a soft foul.

80: Arsenal are threatening now. Maitland-Niles does well on the right, and crosses the ball in for Gibbs, but his header is cleared off the line by Yoshida.

79: Arsenal now go close! But Oxlade-Chamberlain fluffs his lines from 13 yards, ballooning the ball over the bar.

78: Chance again for Long! He holds off Gabriel and all he has to do is lift the ball over Martinez, but he puts it wide!

77: The visitors come close again. McQueen's cross is met by Davis, but his volley on the stretch is over.

73: Ramsey does well to take Xhaka's firm pass, but the compliments end there. He slices his shot well wide.

72: Southampton break with pace but Hojbjerg's final ball to Long is poor and smothered by Martinez.

68: Good build up from Arsenal. Lucas finds Iwobi, who tees up Coquelin, but he pulls his shot wide of the mark.

Southampton have one change remaining.

Arsenal have no changes remaining.

64: Lucas' shot is blocked by van Dijk and goes out for a corner.

Arsenal have one change remaining.

61: Reed pulls down Ramsey. The free-kick is taken quickly. As the ball drifts inside, Coquelin tries his luck, but Forster gets down easily.

59: Play resumes after a clash of heads between the superb van Dijk and the shaky Martinez. Both okay.

55: Nearly three for Southampton! Still up from the corner, van Dijk bursts into the final third, before playing in Boufal. He ventures into the area but his shot is nicked narrowly wide.

54: Southampton go straight up the other end, Martina's low cross it cut out by Gabriel for a corner.

54: Xhaka takes said free-kick with some venom, but it doesn't have enough movement to trouble Forster, who catches it.

53: Ramsey is felled by Yoshida around 30 yards from goal.

51: Long with a sharp turn and shot from 25 yards, Martinez spills it and Gabriel just about keeps it in play.

50: Long gets his head to Martina's cross, but gets underneath it and it loops harmlessly onto the roof of Martinez' net.

49: Promising by Arsenal. Iwobi bundles his way into the final third before finding Xhaka. The ball is worked out to Reine-Adelaide who cuts the ball back for Ramsey; but his strike is scuffed and caught by Forster.

47: A shot on target for Arsenal! But Lucas' tame effort is straight at Forster.

We're back underway for the second half.

Credit to Southampton, they've made their chances count. As for Arsenal, no shots on target thus far, and overall, a very lethargic performance.

HALF-TIME: Arsenal 0-2 Southampton. The Gunners disappear to a chorus of boos. That says it all.

45+1: Boufal shows some twinkling footwork, but can't keep his balance.

42: Even worse for Arsenal, Elneny is to be forced off with an injury. Xhaka is ready.

The Saints double their lead! Jenkinson was caught in possession in his own half and Bertrand has made him pay. Boufal cut the ball back and the defender took a touch before poking into the corner. Arsenal in deep trouble now.

34: Yoshida is the next man to be cautioned, for a very strong challenge on Reine-Adelaide.

33: Iwobi joins him after pulling back Boufal. That all came from another failed Arsenal attack.

29: Mohamed Elneny is the first man to be booked.

27: Long embarks on a searching run, but is suffocated by red shirts, with no options available.

22: Ramsey finds Lucas, but from a tight angle he chooses to play the ball back where it came from instead of cutting it back across goal, and it's easily intercepted.

22: Boufal is decked, quite frankly, by Jenkinson.

21: Long and Boufal get their wires crossed and tackle each other.

19: Arsenal are pressing on now, but Jenkinson's cross is horrendously skewed.

18: First good move by Arsenal. Iwobi plays a quick one-two off of Lucas, but his shot is blocked easily.

17: Arsenal are enjoying a bit more of the ball now, Coquelin tries to work an opening, to no avail.

14: Shouts for handball against Forster are waved way.

13: With their first real spell of possession, the Saints take the lead! Clasie with it, he started the move with a superb ball out wide to Bertrand. The left-back fizzed a ball into the box that was met by Long, his shot was blocked by Holding but Clasie made no mistake with the follow up, leaving Martinez with no chance.

10: Boufal takes a tumble under the challenge of Reine-Adelaide. He's convinced that it was a spurious attempt to win the ball and is flustered when he finds out that Kevin Friend has not awarded a free-kick.

9: Long has a chance to run at the Arsenal defence, but bundles straight into Gabriel.

7: Arsenal spring into life with their first counter-attack of the night, but Lucas' attempted pass to Iwobi is sloppily overhit.

7: Coquelin does well to nip in front of Boufal to win a loose ball.

4: Long gives chase to a hopeful ball over the top, but Gabriel sweeps up the danger.

3: Boufal fouls Jenkinson in the Arsenal half.

2: Arsenal are happy to keep the ball, with every player bar Martinez having a touch thus far.

1: Although numbers may be lacking, there's good early noise from the Arsenal crowd.

Here come the teams in front of a sparse Arsenal crowd on a chilly November evening. Who'll end the month victorious? We'll find out over the course of tonight.

Aaron Ramsey does start, with many of his first-team regular colleagues rested, most not even gracing the bench. Both Marc Bola and Stephy Mavididi make the bench and the exciting Reine-Adelaide starts.

Southampton have brought a reasonably strong lineup to North London, with names such as Forster, van Dijk, Clasie, Bertrand, Davis, Long and Boufal all starting.

The lineups are in for both teams

Welcome back to VAVEL's live coverage of the EFL Cup Quarter-Final between Arsenal and Southampton at the Emirates Stadium. I'm James Eagles, thanks for joining me.

Join me from 6:45pm when the teams are announced - we'll be underway 60 minutes after that. Remember, it's not on UK television, so the best place to follow the live action is here, on VAVEL. You wouldn't want to miss it. 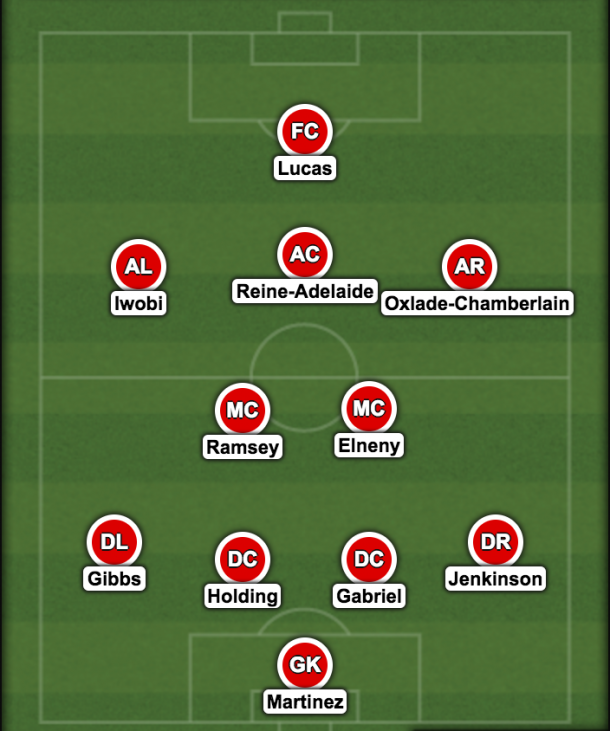 Arsenal: A heavily rotated side for the Gunners, as you would expect. After signing a new contract, Emi Martinez may deputise for both Cech and David Ospina, with a fringe defence ahead of him. There's a chance that highly-rated youngster Jeff Reine-Adelaide will start, with Lucas Perez leading the line. His two goals against Nottingham Forest in this competition helped Arsenal in Round 3. 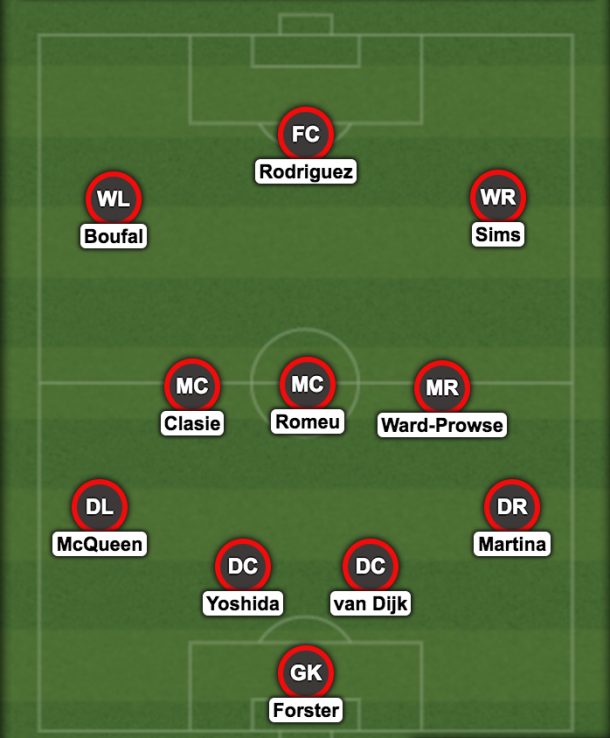 Southampton: A fair amount of rotation amongst the Saints ranks. Alongside the more established players, such as Fraser Forster, Vigil van Dijk and James Ward-Prowse sit promising academy prospects Josh Sims and Sam McQueen. Jay Rodriguez is set to replace Charlie Austin at the front of the attack, with exciting Moroccan winger Soufiane Boufal looking to add to the glorious strike he scored against Sunderland in Round 4.

A look at the five previous encounters makes for interesting reading, with both sides having the measure of one another on their day. Historically, this fixture has always produced talking points - Matt Le Tissier's goal in 2001 helped the Saints to an emotional win at the last game played at The Dell; Robert Pires and Jermaine Pennant both claimed extraordinary hat-tricks at Highbury in 2003, a game that signalled the start of the historic 49 game unbeaten run for Arsenal. And as recently as 11 months ago, Cuco Martina's superlative, 'Roberto Carlos-esque' strike helped the south coast club to a resounding 4-0 win on Boxing Day.

Additionally, for the second time this season, Claude Puel faces his former manager. Two months ago, the Gunners came from behind in dramatic circumstances to record their second win of the season, after Petr Cech's early own-goal had them firmly on the back foot.

With both sides recording home league wins over Bournemouth and Everton respectively on Sunday, tonight's cup tie is set to be a pulsating clash; it also marks the first time the two teams have met in this competition in two years - that time round Southampton progressed, with Arsenal left licking their wounds at an early exit. Arsene Wenger has never won this trophy before, despite reaching the final twice - so you would imagine he'd be keen to amend that this season.

It's a good time for the Gunners, despite dropped points in November. Currently on a 19 game unbeaten run, one that stretches back to August, it's going to be a big ask for the Saints, but don't discount them. They may be on a high after sealing progression to the knockout stages of the UEFA Europa League - despite losing out on top spot to Sparta Prague - but their recent form has been topsy-turvy. Although they held high-flying Liverpool to a 0-0 draw, they lost to struggling Hull City.

Good afternoon and welcome to VAVEL's live coverage of Arsenal's EFL Cup Quarter-Final tie with Southampton, at the Emirates Stadium, I'm your correspondent, James Eagles, and will be guiding you through tonight's events.

As it happened: Arsenal come from behind to beat Liverpool at The Emirates23 days ago

What next for Arteta's walking circus?a month ago

David Luiz: Why Mikel Arteta might want to keep him2 months ago