21:59 - Thank you for joining me for this live text commentary of West Ham vs Chelsea and until next time have a great evening !

21:58 - West Ham wull be looking to return to winning ways with the trip to Bournemouth on Saturday, while Chelsea will look to secure their place in the FA Cup semi-finals when they host Manchester United on Monday night.

21:56 - The result looked secured with Diego Costa adding a second early in the second period. Chelsea looked to shut down the game but a late Lanzini effort caused some concern but they held out for the win.

21:55 - The Hammers did well in the first period dominating the possession, but the Blues managed to take the lead through an excellent Hazard effort.

21:54 - Chelsea have returned their ten point at the top of the Premier League but were made to work for it against a brave West Ham.

92' - West Ham get one back !, Good run from Ayew with Snodgrass wanting it it deflected well to Lanzini and hits an excellent effort into the bottom corner.

89' Entering the final minutes here with the London Stadium all but empty.

81' - Chelsea slowly get their shot away, with Willian setting up Fabregas but it is well over the crossbar.

78' - Game has certainly died down since the second goal, with Conte looking to close out the game for the three points. Remains 2-0 Chelsea.

76' - Subs for both sides with Moses off for Zouma and Noble coming off for Fernandes.

67' - WHAT A SAVE. Good play from Hazard as he finds Costa, excellent turn before pulling the trigger and Randolph managed to palm it behind.

63' - Double change for the home side with Feghouli coming off for Ayew and Reid off for Byram. Chelsea also make a change with Pedro coming off Matic.

61' - Good chance for the Hammers, ball comes to Feghouli his effort is blocked on the line, and Fonte eventually puts a ball over the crossbar.

58' - Positive break as Feghouli plays it out to Snodgrass, his cross is over Courtois but comes to nothing.

53' - Carroll makes some space and tries one from distance but it doesn't get the right amount of dip as it hits the roof of the net.

51' - Faint calls for handball from West Ham, but Chelsea break through Alonso who does brilliantly to get past Fonte but his effort trickles wide.

50 ' -CHELSEA MAKE IT TWO. It is simple enough for the Blues, the corner comes with the ball taking a touch off the head of Obiang and Costa is there to knee it home. 2-0 Chelsea.

45' - Second period is about to get underway here with Carroll kicking us off ! 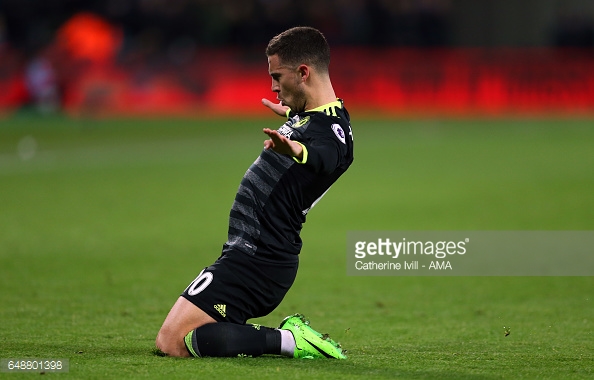 20:50 - Great half at the London Stadium, the Hammers dominated the possession in the opening proceedings but Hazard's excellent strike from the counterattack seems them ahead. It could easily been two, three or four with chances from Costa, Moses and Pedro coming in quick succession but remains 1-0 at the break.

48' - Ball into the area in from Moses and Randolph collects what looks to be the final chance of the half.

47' - First yellow of the night goes to Chelsea, with Fabregas booked for the foul on Cresswell.

45' - Four minutes added on here at the London Stadium.

43' - Some concern here for Cresswell, who is walking gingerly off the field to receive treatment.

41' - HOW WAS THAT STAYED OUT ?! Hazard manages to get the ball, looks to find Costa but is behind him, falls well to Moses but blocked well by Cresswell, then comes to Pedro but he produces a good save from Randolph. Somehow remains 1-0 Chelsea.

40' - Best chance for the Hammers, with Lanzini playing a one-two with Noble with space on the edge of the area, but the Argentine's effort is well over the crossbar.

37' - Little over eight minutes until the break here, Game has settled down since the Hammers fell behind and that Hazard goal proves to be the difference.

31' - Dangerous ball from Fabregas almost good for Pedro, but Randolph collects. Half hour and for the majority it was West Ham with all the pressure, but it was just the one shot that they needed for Chelsea to take the lead.

25' - CHELSEA TAKE THE LEAD. The leaders find themselves ahead totally against the run of play, a short pass from Noble is intercepted and Chelsea break with ferocious pace. Pedro and Hazard lead that attack with the Spaniard playing a great ball and Hazard rounds Randolph and slots into a empty net.

23' - It is clear what Bilic's tactic is, cross and aim for Carroll but another failed cross ends with a semi-promising free-kick.

19' - Chelsea are not looking like the team we have come to know as they are been pressured by their hosts.

17' - Hammers are been pushed forward by the London Stadium faithful and are responding with some decent pressure.

14' - Alonso turns on the boosters to try and keep the ball in but proved too much for the full-back.

9' - Kit men in for a long night with Cahill's shirt ripped in half after a tussle with Feghouli.

7' - Concern for Carroll as he cut on the eye above the nose, but looks to be fine to carry on. Snodgrass gets the corner in but Courtois punches away.

5' - Ball in from Feghouli finds Carroll at the far post, striker caught by Moses and the chance goes begging.

3' - Kouyate commits the first foul as he brings down Hazard. But the free-kick in from Fabregas is well collected by Randolph.

19:56 - Players are in the tunnel here ahead of kick-off, I suspect we are in for a good London derby !

19:53 - Carroll seems to be the biggest threat for the Hammers tonight, but will the striker come to haunt the blues again ? minutes away from kick-off.

19:40 - Just over 20 minutes until kick-off here at the London Stadium. The Hammers are one of only four sides to beat Chelsea this season, and they will be hoping that they can do the same again this time around.

19:11 - Conte has named an unchanged side from the win over Swansea with Cesc Fabregas keeping his place in the squad.

19:10 - Andy Carroll returns to Slaven Bilic's side for the first time since the 3-1 win over Southampton, and comes in for Michail Antonio who is suspended.

19:00 - It is expected to be a fiery affair at the London Stadium on Monday night, with the Hammers looking to secure their place in mid-table while Chelsea will look to extend their lead at the top of the league.

19:00 - Hey everyone, I am Danial Kennedy and welcome to VAVEL UK's coverage of West Ham United vs Chelsea.

Both sides met in the opening weekend of the campaign, which ended in a 2-1 defeat for the Hammers despite their best efforts. However they managed to get revenged when the Blues visited them in the EFL Cup, Cheikhou Kouyate and Edmilison Fenrnades gave them a comfortable and despite Gary Cahill's best efforts they slumped to a surprise defeat.

Conte has no concerns in terms of injuries ahead of this clash, with the only concern been star man Eden Hazard. The Belgian has been back on top form since Conte's arrival, but received a knock in training but the Italian stated that he is confident that Hazard will be available.

Andy Carroll has been a big miss for the Hammers in the last two clashes having picked up a groin injury, the 28-year-old will come in for Michail Antonio who picked up a suspension last weekend.

Last Saturday saw the return of an old face, with Paul Clement returning to Stamford Bridge with Swansea City and they proved quite the test. Cesc Fabregas got the ball rolling with his opener, but Fernando Llorente managed to bring things level in first-half extra-time. Things looked to be heading for a second consecutive league draw, but goals from Pedro and Diego Costa secured a comfortable 3-1 victory.

Tottenham ended that run at the beginning of the year with their 2-0 victory, but certainly didn't stop Chelsea's dominance as they have remained unbeaten in their next nine games since then.

It has been a very contrasting season for their visitors, with Conte proving an excellent addition to the Blues as they look to be well on course to life the league title come May. There was some doubters especially after the defeat to Arsenal, but that defeat catapulted them into excellence with a 13-game unbeaten run taking them right to the top of the tree.

Bilic's plans were thrown out the window almost instantly with Troy Deeney's penalty went in with three minutes on the clock, the Hammers dominated the rest of the contest but didn't look to be finding the back of the net until Andre Ayew's strike snatched a 1-1 draw.

However they haven't tasted victory since their trip to the South Coast, suffering late heartbreak the last time out at the London Stadium with the 2-2 draw against West Brom. Hopes and the desire for revenge was high when they visited Watford last Saturday evening, having lost the reverse fixture 4-2 earlier in the campaign.

The Hammers have only tasted defeat in their last six league matches, which was the humiliating 4-0 defeat to Manchester City but that was followed up with the impressive 3-1 away victory over fellow high flyers Southampton.

It was a terrible start to the campaign for Slaven Bilic's men which started with a opening day defeat to Monday's opponents, but they have improved immensely since and will be look for their first win in three matches when Antonio Conte's side travel across the capital.

Hello everyone I am Danial Kennedy and welcome to VAVEL UK's coverage of Monday night football, with West Ham United hosting Premier League leaders Chelsea. The kick-off in this fiery derby at the London Stadium is set for 8pm, so stay with VAVEL for the latest team news and coverage in the build-up.

Leicester City vs West Ham United preview: How to watch, kick-off time, team news, predicted lineups and ones to watch&nbsp; 23 days ago