Manchester United drew 1-1 away to FC Rostov in the first leg of their Europa League quarter-final tie on a dismal playing surface at the Olimp-2 stadium.

The returning Henrikh Mkhitaryan put United in front on 35 minutes with a close-range finish following good work from Marouane Fellaini and Zlatan Ibrahimovic.

Rostov equalised early in the second half through striker Alexsandr Bukharov as he latched onto a ball over the top of United's defence which he cleverly guided past the onrushing Sergio Romero.

Reds boss Jose Mourinho will be satisfied with his side picking up a key away goal in difficult playing conditions in Russia. 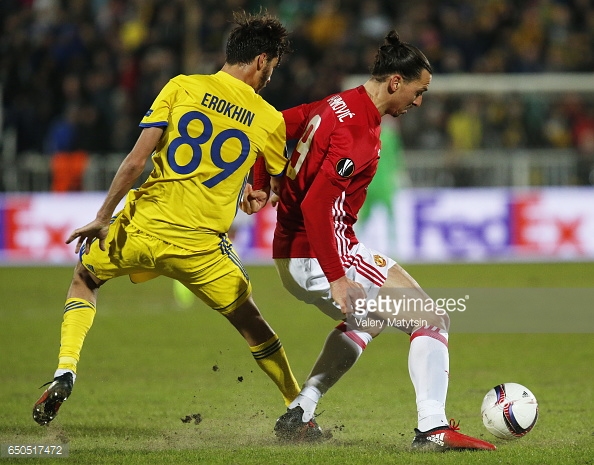 Sergio Romero – 7: The Argentinian produced a solid performance with Rostov failing to test the keeper apart from the home side’s goal which Romero had no chance of stopping. He proved his worth as United’s second-choice keeper with a calming presence at the back.

Ashley Young – 7: Young looked comfortable in his role at right wing-back, offering his side an attacking threat out wide. He produced a number of testing crosses for the home side, including a low-driven ball which Paul Pogba should have at least hit the target with during the early stages of the game.

Phil Jones – 6: Jones impressively picked out Fellaini in the build-up to Mkhitaryan’s goal but he will be disappointed with his role in the home side’s goal. The centre-back played Rostov goal scorer Bukharov onside just before he found the back of the net. The 25-year-old has looked shaky in United’s last two matches following a spell out injured.

Chris Smalling – 6: Smalling was also at fault for Bukharov’s goal as he failed to stick with the towering forward, allowing him space in behind the Red’s backline to control the ball and finish beyond Romero. The defender’s performance did improve following the goal but he will need to be fully switched if selected to start against Chelsea in the FA Cup on Monday.

Marcos Rojo – 8: One of the Red’s best performers at the Olimp-2 stadium, with a number of important tackles and interventions at the back. Rojo was often the last man in defence and his timely challenges prevented Rostov from creating a scoring opportunity. The Argentina international is enjoying his finest season as a Red.

Daley Blind – 6: Blind was able to push forward as a left wing-back but his best moments came via set pieces. The birthday boy whipped in dangerous free-kick from out wide during the second-half which Rojo nearly latched onto with a header. The Dutchman worked hard to combat the threat of Dmitry Molosh, who was the home side’s best player on the night. 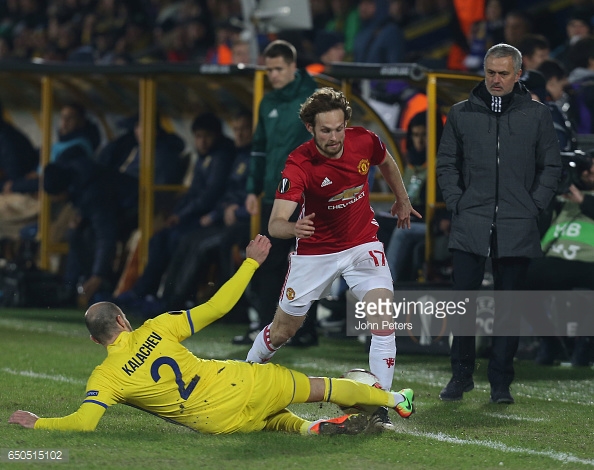 Ander Herrera – 5: Herrera failed to make any impact in this Europa League tie, with the centre of the pitch constantly cutting up, stopping any fluidity in the Spaniard’s play. The midfielder still looked to support the likes of Ibrahimovic and Pogba in attack during a difficult evening.

Paul Pogba – 6: The Frenchman found some good positions in dangerous areas but his end product ultimately let him down. Pogba’s best chance came very early on via a cross from Young which he scuffed into the ground. The poor playing conditions contributed to the 23-year-old’s poor touch in the centre.

Marouane Fellaini – 7: Fellaini played a key role in Mkhitaryan’s goal as he superbly controlled a long-range pass from Jones on his chest before picking out Ibrahimovic, who found the Armenian to put United ahead. The Belgian’s physical style of play suited him in this tricky encounter. 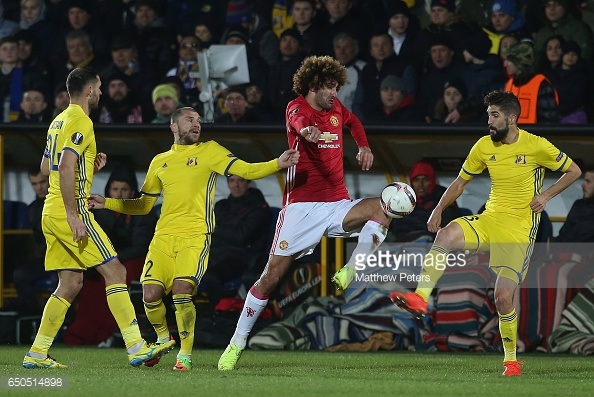 Henrikh Mkhitaryan ​– 7: Mkhitaryan returned from injury to bag United a key away goal with a calm finish. His lively display gave the Reds an outlet in attack and he will be happy to come away from this game unscathed ahead of the clash against Chelsea. He was replaced on 67 minutes by Anthony Martial.

Zlatan Ibrahimovic – 6: The Swede picked out Mkhitaryan inside the opposition’s box for the opening goal but he failed to test Rostov goalkeeper, Nikita Medvedev, with two of his efforts flying high over the crossbar. Ibrahimovic is expected to start the second-leg at Old Trafford next week following his three-match suspension in domestic competitions ruling him out of the Chelsea match. 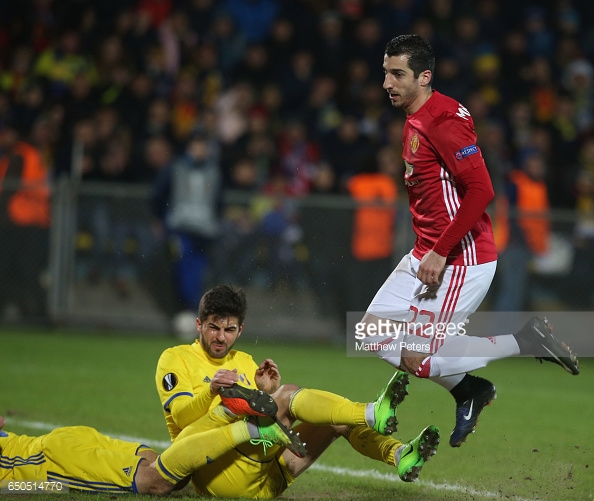 Anthony Martial – 6: Martial’s pace and energy offered United a threat in attack but a lack of support left the French international isolated. He had the chance to snatch the win for United with virtually the last kick of the game but he failed to latch onto a Fellaini header.

Antonio Valencia – 6: His late introduction left him with little time to make an impact but he did manage to produce one cross in stoppage time.

Michael Carrick ​– 6: No time to influence play with only a few minutes left on the clock.

The Warmdown: Man United put in team performance to win in Paris a day ago

A trip down memory lane: That night at the Parc des Princes 4 days ago

Opinion: The biggest winners from Manchester United's victory over Newcastle United 5 days ago

The never-ending quest - who is Manchester United's partner for Harry Maguire? 20 days ago

Key Quotes: Solskjaer looks ahead to clash with Tottenham 21 days ago