Manchester United manager José Mourinho has stated that midfielder Nemanja Matić has "everything" that The Red Devils want in a footballer, after the Serbian completed his proposed £40million move to the Theatre of Dreams.

Represents everything we are looking for

United's summer spending had already broke the £100m before the arrival of Matić, having completed the signings of defender Victor Lindelöf and striker Romelu Lukaku from Benfica and Everton respectively.

It has been clear that Mourinho has been looking to bring in a defensive midfielder to free up the creativity of Paul Pogba, it was reported that The Red Devils were very interested in bringing in Tottenham's Eric Dier but that since fell through.

Mourinho has made it no secret of his desire to make a move for the 29-year-old, a fee agreed of around £40million was agreed on Saturday between the two clubs with Matić having his medical on Sunday and the manager stated his delight at securing a player he believes "represents everything" that United want.

"Nemanja is a Manchester United player and a Jose Mourinho player," Mourinho told manutd.com on signing Matić. "He represents everything we want in a footballer; loyalty, consistency, ambition, team player."

"I would like to thank him for his desire to join us because without that," the coach stated. "It would be impossible to have him here."

"I am sure our players and supporters will love him," Mourinho added. "A big welcome to our new number 31." 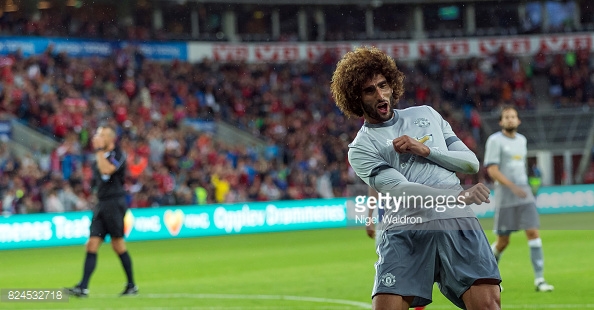 "Too important to me"

The big-money arrival of Matić does give a hint that could be an exit on the cards for Marouane Fellaini, with the Belgian having been heavily linked with a move to Turkish side Galatasaray in the last few days.

Fellaini currently only has one year left on his contract and with the arrival of the Serbian could face difficulty in been considered for Mourinho's starting XI, he starred and scored in the 3-0 win over Valerenga on Sunday and post-match Mourinho stated that Fellaini was going absolutely nowhere.

"It's easier for Galatasaray to get me than Marouane," he said. "If they need a manager, they have a chance, but Marouane? Forget it."

The coach added: "He is too important to me."

Liverpool-United game continued theme of this tight season16 hours ago

Liverpool 0-0 Manchester United: Shaw and Lindelof shine as United take a point from Anfield2 days ago

Liverpool 0-0 Manchester United: A stalemate which leaves both sides wondering2 days ago

Manchester United's  predicted line up to face Liverpool2 days ago

Solskjaer post-match comments: Top of the table and Pogba praise6 days ago