Everton got their Premier League season up and running with a 1-0 victory over Stoke City.

Wayne Rooney scored on the brink of half-time to put the Toffees ahead upon his league return to Goodison Park.

The striker's wonderful header was his 199th league goal and first for Everton since 2004.

Seven of the starting 22 were making Premier League debuts for their respective new clubs, with the majority wearing blue.

An influx of summer recruits - including Sandro Ramirez, Jordan Pickford and Michael Keane - for Everton made their first game of the season even more enthralling.

Sandro had the first real effort for the home side when he dragged his shot wide of Jack Butland’s goal. Idrissa Gana Gueye also had an effort saved by the England ‘keeper in an opening 45 minutes that produced very little in terms of goalscoring opportunities.

Stoke’s attacking activity in the first-half was restricted by the Blues’ back three to a cross come shot by Mame Biram Diouf that was tipped wide by Pickford.

As the match headed towards the interval, a real moment of quality from Ronald Koeman’s side put them ahead just before Neil Swarbrick blew his whistle for half-time.

Some nice play on the periphery of the penalty area between Sandro, Gueye and Rooney resulted in a pass being fed out wide to wing-back Dominic Calvert-Lewin, who netted in the club’s Europa League qualifier with Ružomberok earlier this month.

The youngster’s bending cross accurately found the incoming Rooney, who unleashed a brilliant header to wrong-foot Butland and find the back of the net in emphatic fashion. 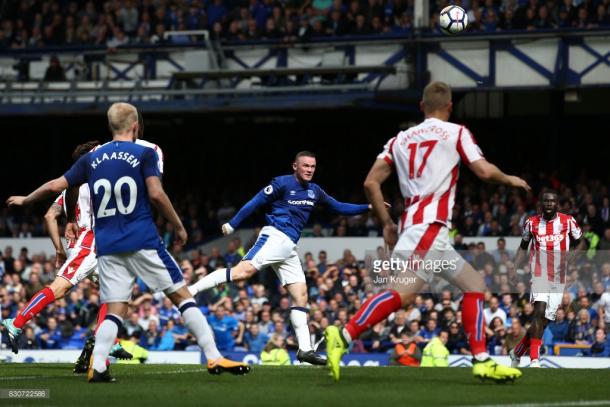 The 31-year-old’s last league goal for Everton came 4869 days ago but this was well worth the wait.

Hosts keep Stoke at bay in second half

Stoke had moments in the second half where they looked dangerous but an equaliser would not materialise for the visitors.

A cross from Erik Pieters just eluded Berahino and Diouf just after the break before Darren Fletcher shot wide of Pickford’s post from 20-yards.

Brilliance from Chelsea loanee Kurt Zouma denied Calvert-Lewin his first goal of the season and his goalkeeper, Butland, was again on hand to keep to score at 1-0 by putting Calvert-Lewin’s effort past the post.

Newboy Eric Maxim Choupo-Moting looked bright once he was introduced as Mark Hughes’ men searched for a late goal. Xherdan Shaqiri came closest, though, but his superb strike was kept out by an equally superb save by Pickford. 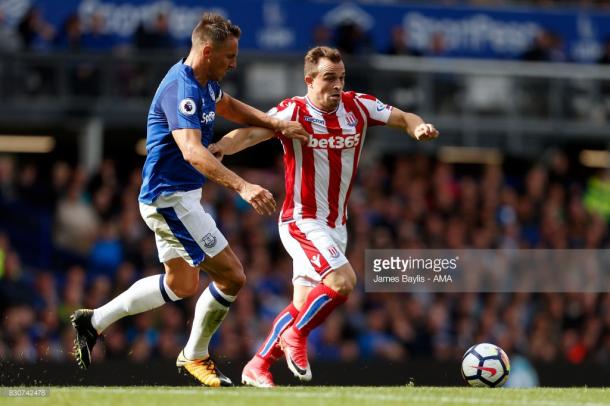 The four minutes added on was not enough for Stoke to salvage a point on the opening weekend with the scoreline mirroring their 1-0 defeat on Merseyside last term.

Koeman will be impressed with his new look team going into another long, gruelling season. Hughes and Stoke will have plenty to ponder before they face Arsenal at the bet365 Stadium next Saturday.

The Warmdown: Superb Stoke shine against the Swans a year ago

Swansea City vs Stoke City preview: How to watch, kick-off time, team news, predicted lineups and ones to watch a year ago

Blackburn midfielder Evans linked with move to Stoke: Is he what the Potters need? a year ago

Stoke vs Ipswich Preview: Paul Lambert returns to ex-club in midst of struggling form 4 years ago