Queens Park Rangers will be travelling to East Anglia on Wednesday for their Championship encounter with Norwich City at Carrow Road, and the West Londoners will be aiming to continue their fine start to the 2017/18 season.

Ian Holloway and his men have accumulated a confident four points from their two outings so far, as well as progressing to the next round of the League Cup after triumphing against Northampton Town.

Meanwhile, the Canaries have had a differing tale to tell from their opening games of the campaign. Having salvaged a late point at Craven Cottage to Fulham, they have since beaten Swindon Town in the cup and fallen victim to a rejuvenated Sunderland side.

Both Norwich and QPR will be eagerly in need of the three points for very different reasons; a win for the home side may lift them away from the bottom three but if it went the other way then the Rangers could sneak into the top-six, depending on results from Tuesday's fixtures.

Notable absentees for both sides

​Daniel Farke's uninspiring start to the season hasn't been helped by the growing shortlist of injuries being racked up, specifically key men who they could miss in weeks to come.

Influential attacking midfielder Alex Pritchard is out for up to twelve weeks after the former Spurs-man had surgery on his ankle earlier this week. Whilst recent acquisition Tom Trybull, and young defender Harry Toffolo, are on the repair to recovery after featuring in a reserve game on Monday.

Farke has also mentioned that Ivo Pinto and veteran Wes Hoolahan are still yet to regain full match fitness after missing large parts of pre-season. This may allow the likes of youthful prospect James Maddison to continue featuring in the starting eleven.

Meanwhile the R's are also suffering with a number of notable missing first-team players. 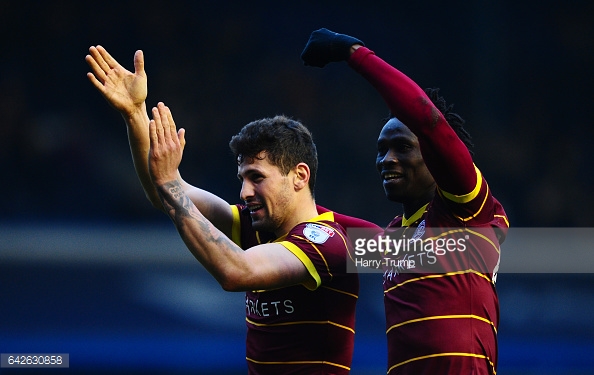 Centre-back Grant Hall remains out of action with tendonitis, missing much of pre-season due to this, and fellow defender Steven Caulker is still attempting to build-up his fitness after openly coming out about his off-field issues.

Winger Yeni N'Gbakoto continues his spell on the side-lines with an ankle injury and so does Idrissa Sylla, who has been called up to the Guinea national side for the upcoming international matches, but has a problem with his head.

Conor Washington is set to lead the line having netted himself two goals this campaign so far, both coming in the encouraging 2-0 win over Reading on the opening weekend.

​Incidentally, the Canaries met the Hoops on the final day of the 2016/17 season when the hosts ran out 4-0 victors at Carrow Road to end a fairly dismal campaign for the club.

Wes Hoolahan bagged two goals that afternoon, sandwiching those by Alex Pritchard and Josh Murphy, whom has completed a switch to Newcastle United, to complete the comfortable rout for then-caretaker boss Alan Irvine.

Queens Park Rangers haven't left Norwich with all three points since September 2008, nearly nine years ago, and that was their last triumph over the East Anglian outfit until they defeated them at Loftus Road in November of last year.

Norwich City vs Birmingham City preview: Team news, predicted lineups and how to watch a day ago

Nottingham Forest vs Rotherham United preview: How to watch, kick-off time, team news, predicted lineups and ones to watch a day ago

Reading vs Wycombe Wanderers preview: How to watch, kick-off time, team news, predicted line-ups and ones to watch 2 days ago
Restore your password
Please enter your user name or email.
Login Member or Writer Panel
Enjoy your own Customized Newspaperwith VAVEL topics' carousels!