Already starting to pull away at the top, VfL Wolfsburg claimed another healthy win away to SC Sand, as SC Freiburg, FFC Frankfurt and Turbine Potsdam all found narrow wins away to Bayern Munich, 1899 Hoffenheim and MSV Duisburg. Elsewhere Werder Bremen bagged their first point of the season with a draw against USV Jena but fellow promoted side, FC Köln, had little joy at home to SGS Essen.

In what could go some way to deciding who does and doesn’t finish in the top two, Freiburg struck a big blow to Munich early in the season as they left Bavaria with all three points courtesy of Hasret Kayikçi’s first-half goal. Both Tinja-Riikka Korpela and Laura Benkarth were kept occupied throughout, the latter coming up trumps with two superb saves to deny substitute Melanie Behringer on either side of Jobina Lahr’s late sending off.

The hosts grabbed an early lead after Annalena Rieke was well found by a long ball from Jana Sedláčková, the teenager with room to turn and drive forward before chipping Anneke Borbe from 22-yards. Not looking for a repeat of their opening day loss in a hurry, Werder pulled level ten minutes later with a superb floated shot from Cindy König, the ball lifting and curling from one corner of the box to the far corner of the goal, Justien Odeurs left with no chance. With a ball that started from the back, Jessica King swept the ball over a cluster of green shirts for Ivana Rudelic to volley into Amelia Pietrangelo’s path, the Canadian watching the ball bounce ahead of her before striking it in off of the far post on the half-volley.

Behind from 44th minute, Bremen kept their tails up and feet on the ground, finding an equaliser late in the day through Nora Clausen after she spun away from Susann Utes and lashed the ball into the bottom corner, skimming the inside of the post on the way in. The draw enough to put an end to a run of five FBL games without a point for Bremen, their last points collected at home to Sand in April of 2016.

Frustrated throughout the first-half, Wolfsburg finally found an opening five minutes after the break after a neat one-two between Tessa Wullaert and Noëlle Maritz saw the visitors carry the ball forward before the Belgian flashed it across the box for Pernille Harder to thump home. From there things began to go downhill for Sand and fast, first Jana Vojteková was dismissed for a second booking and three minutes later a fresh legged Alex Popp made it two with a diving header at the near post. Despite Sand shoring things up, Maritz was gifted space to run into after being picked out superbly by Lena Goeßling, the defender calm as she drove the ball towards the far corner. Fully a day for players returning from injury, Zsanett Jakabfi made the most of her first minutes since February, in the right place to send the ball home after Carina Schlüter had twice denied Harder.

Still struggling with an injury-hit squad, when Tanja Pawollek’s hopeful effort from outside the box slipped through the crowd and beyond Friederike Abt in the fourth minute it looked as if Hoffenheim were in for a rough day. However, the goal wasn’t the start of an onslaught and TSG did well to settle into the game and limit Frankfurt’s chances, arguably creating some of the better openings throughout but were, however, well thwarted by Bryane Heaberlin.

Not able to ask for a better start in Cologne, Essen hit the hosts for three in six minutes to have all but won the match before the twentieth minute. Played through by Manjou Wilde, Sarah Freutel slipped the ball past Anne-Kathrine Kremer with ease two minutes before Marina Hegering fired a peach into the top right corner from range. Linda Dallmann’s low finish from inside the box, similar to Freutel, both with Wilde to thank for the service as well as Köln’s high line.

For the next hour, the game calmed down before the goals once again came in a flurry, Carolin Schraa’s finish from eleven yards into the far corner seeming like a mere consolation, especially when Freutel reopened the gap to three, five minutes later. With one big touch to take the ball around Kremer, Freutel emphatically blasted the ball into the empty net two minutes before Amber Hearn volleyed in a second for the hosts, the deficit back to two. Alas, as it had been for most of the game it was to finish with a three-goal advantage to Essen, Laura Radke the one to wrap up clean passing move around an all-too static home defence.

Nowhere near their best, the visiting Turbines rather got away with one at the PCC-Stadion, Elise Kellond-Knight’s second-half penalty enough to see the visitors scoop all three points. Left frustrated by Lisa Schmitz, Duisburg will be looking ahead to a trip to Bremen and a strong chance to get off of the mark for the year. 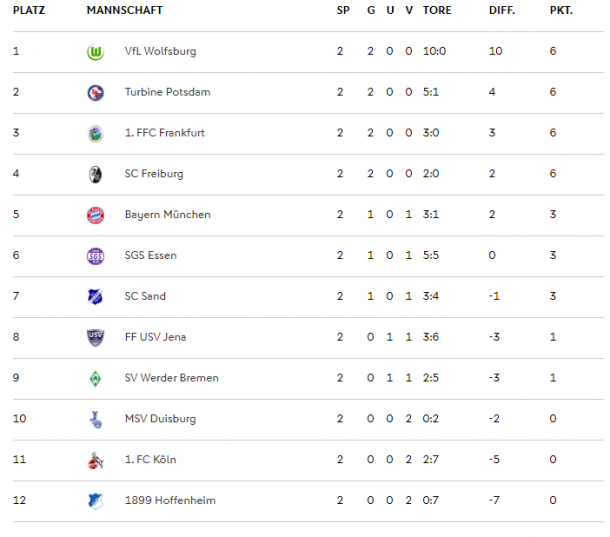 Catarina Macario is showing early signs of brilliance. Can she become a world-class centre-forward?&nbsp; 5 days ago

Chelsea vs Reading Women's Super League preview: team news, predicted line-ups, ones to watch and how to watch 5 days ago

Brighton & Hove Albion Women vs Bristol City preview: team news, predicted line-ups, ones to watch and how to watch 5 days ago

Tottenham Women vs Chelsea Women's Super League preview: Team news, predicted line-ups, ones to watch and how to watch 6 days ago

Bristol City vs Manchester United Women's Super League preview: team news, predicted line-ups, ones to watch and how to watch 12 days ago
//