Sam Allardyce says Everton’s midweek win over Leicester City eases the pressure on his players but he wants his players to be more consistent going forward.

The Blues travel to the Emirates on Saturday evening to take on Arsene Wenger’s Arsenal, who will be looking to rebound following their midweek defeat away at Swansea City.

Ahead of the game, the Everton boss said: “The win over Leicester eases the pressure and the players were starting to feel that after a few games without a win.

“When that happens the pressure mounts on all of us. Getting the result was very important because we had done so well when I first came.”

The Blues had been without a win since November but their position in the Premier League table had barely changed in that time.

It was something Allardyce acknowledged.

“Even though we hadn’t won in our previous seven, we have stayed ninth. That we hadn’t moved in the table kept the pressure off us but it was getting to a point where had we not won and others did, we could have dropped four or five places,” Allardyce said.

“That would have put that pressure back on us. Looking at it from the other side, we are only three points off Leicester (who sit eighth). So it’s a case of can we push on and be more consistent with our results? It’s a big ask ahead of Saturday because Arsenal’s home record is one of the best in the Premier League.”

Mangala to make the trip

Following the win on Wednesday, the Blues made their last move in the final hours of Deadline Day to bring in Eliaquim Mangala on loan from Manchester City.

“We have had the opportunity to bring Eliaquim in on loan as well. His defensive play is very good and he is naturally left-footed, where we haven’t got a natural left-footer at all in the team at the moment,” the Everton boss said of the signing.

The Frenchman could make his Everton debut on Saturday and is set to be a part of the squad but Allardyce did not reveal any of his plans during his time with the press.

He continued: “So now we have someone who can play down the left-hand side, which will not only be better defensively but will also allow us to create that little bit more.

“You could see on Wednesday that our strength lay down the right. Our left was pretty good but now we have to try and get better in both areas. When you have a naturally left-footed player then you have balance.”

Seamus Coleman completed the full 90 minutes on Wednesday in his return to first-team football following 10 months on the sidelines after breaking his leg against Wales.

The right-back could be in the squad for the trip to face the Gunners but Allardyce wants to manage his return and will consult his medical staff before making a decision.

Leighton Baines and Ramiro Funes Mori remain sidelined for Everton but are set to return in the coming weeks. 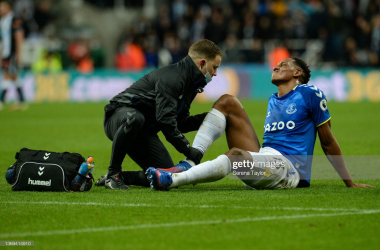