After Manchester City surprised Burnley with an unfamiliar angle of attack, a change of approach from Sean Dyche’s side proved crucial to helping the hosts to a confidence-boosting draw.

City dominate with a different style of play

So often this season we have seen Manchester City tear opposing teams apart on the counter-attack and with neat, intricate passing in and around the penalty area. Yet their early dominance against Burnley was a result of intelligent tactical play from set-pieces.

Despite the Clarets looking susceptible to crosses in recent weeks, City opted to use movement and disguise to cause havoc from corners. Players running in behind defenders and taking opponents out of the equation created room for City’s stars outside of the box and one man certainly took advantage. For all of City’s goalscoring talents in their midfield and attack, it was left-back Danilo who unleashed a ripper to give City the lead midway through the first half. He almost did the same later in the game but for an expert tip over the crossbar by Nick Pope in the second half.

It was the slight movements and intricate passes evidenced in the build-up to that goal that proved to be the telling difference between the two sides in the first hour of the contest. City created very little by their standards in open play faced by a Burnley side who played 4-4-2 but effectively with the two strikers as attacking midfielders. When Kevin De Bruyne’s inch-perfect pass did eventually create space for Kyle Walker behind the Burnley defence, Raheem Sterling missed an open goal from point-blank range.

Burnley pull themselves back into the contest

In contrast, Burnley were very direct when they had the ball and pressed from the front when they didn’t. It was no surprise to see their first two opportunities fall to centre-back Ben Mee from set-pieces. Yet their aggressive defensive strategy was made to look depleted by a calm and assured City defensive display, led by goalkeeper Ederson. The Brazilian picked out passes that De Bruyne would have been proud of but was still on hand to produce a world-class stop when Burnley managed to string a series of intricate passes together. Aaron Lennon was convinced he had scored on his home debut but for an outstretched hand tipping his powerful strike onto the crossbar.

However, that moment sparked confidence throughout the home ranks. They began to knock the ball about and pull City players around as the visitors have been used to doing against their opponents all season. A taste of their own medicine. However, the gaps created were eventually exploited as Burnley grabbed an unlikely equaliser. Matt Lowton played the telling delivery into the box from deep, finding a space between the back four and Ederson that was latched onto by Johann Berg Gudmundsson to send the Turf Moor faithful wild in the final minutes.

Burnley January Transfer Window: Who is coming and who is going?10 days ago 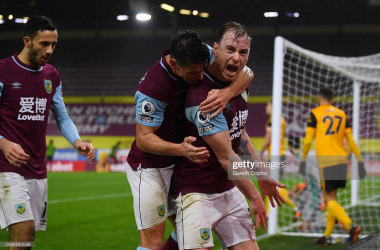