Manchester City are touted as firm favourites to make a passage into the last-eight of the Champions League, but know they face a tough test to get there with their last-16 clash against FC Basel.

Looking to be a bogey ground for English teams once again

Basel's league campaign has been somewhat so-so as they currently sit behind Young Boys in the Swiss League with a victory and a loss in the last two matches, but it has been their European form that has shone through and their recent form against English sides will be a big boost for coach Raphael Wicky.

Basel have won four of their five matches against English counterparts at St Jakob-Park in recent years, this included a 1-0 win over Manchester United in this year's competition.

It was the Swiss outfit who finished just behind United in Group A to set up this clash, and they will be keen to show the high-flying City that they will be no pushover.

Going to be as easy as everyone thinks?

Pep Guardiola's side have been pretty much all dominant across all fronts in what has already been a stellar season, but it does seem that their dominance in other places will ensure their priority will be focused on Europe's elite competition.

City have managed to establish a seemingly uncatchable 16-point gap at the top of the Premier League table with Saturday's 5-1 win over Leicester City, as well as places in the fifth round and final of The FA Cup and Carabao Cup respectively.

The Champions League has always proven to be the trophy that has eluded City over the last few years but will have been encouraged by breezing to the top spot in Group F, but will know not to underestimate any side having their unbeaten run in all competitions ended in the last group stage clash with the 2-1 defeat to Shakhtar Donetsk.

The big absence for Basel will be influential midfielder Luca Zuffi who will be missing through injury, there will also be some concern over the late fitness test of Eder Álvarez Balanta who was withdrawn at the weekend in the win over FC Thun.

City fans will be very surprised to hear that talismanic winger Leroy Sané could be in line for a return to the starting XI, the German was expected to be out for several weeks after picking up ligament damage at the end of January but travelled with the squad to Switzerland just two weeks later.

Guardiola will also have been boosted by the return of Fabian Delph and David Silva to first-team training on Monday, Gabriel Jesus continues to be absent but Guardiola confirmed that the Brazilian could be back for the return leg in March.

FC Basel will host Manchester City in the last-16 of the Champions League at St Jakob-Park on Tuesday, February 13 with kick-off at 7:45pm GMT.

The Warm Down: Foden breakthrough enough to seal win against Seagulls2 days ago 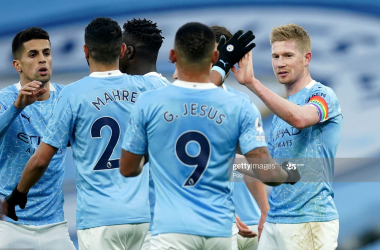