Having been demoted from the second tier last season due to a reconstruction of the women’s football pyramid, the Golden Girls look to be one of the stronger teams in the National League South, and head coach Armand Kavaja will hope that their new acquisitions can bolster their firepower even further.

Three in for Watford FC Ladies

Scanlon, who joins after impressing Kavaja and his staff while on trial in pre-season, has a wealth of experience to bring to the team. The midfielder completed a football scholarship at the University of Alabama before turning out for London Bees and Oxford United in WSL 2.

A more recent spell with Tottenham Hotspur was disrupted by a knee injury, however, Scanlon is now looking forward to a fresh start in her career with a group of players embarking on a new journey of their own in the National League South.

Midfielder Stojko-Down has been at the Hornets before. A standout performer in the Watford Centre of Excellence between Under-12s and Under-14s, the 20-year-old was picked up by Arsenal Women where she won three trophies — the FA Youth Cup in 2013, followed by the FA WSL Development Cup in 2014 and 2016.

Stojko-Down spent last season with London Bees in the FA Women’s Championship and returns to Watford with plenty of invaluable experience and accolades to show for her time away from the club.

And finally, 17-year-old defender Hattie Kettle has earned a permanent place in Kavaja’s team after putting in an accomplished display in the 7-0 win over Maidenhead United last week. 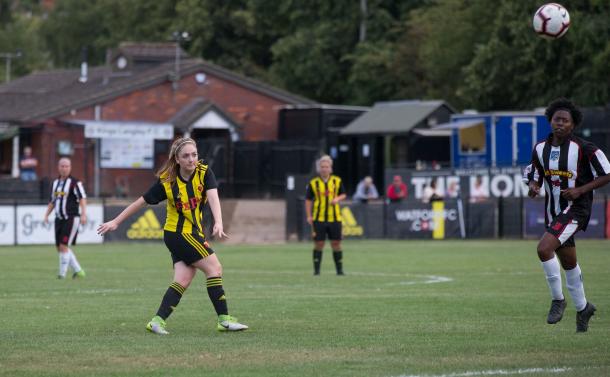 A product of the Reading FC Women Academy, Kettle, despite her young age, played a full season in Tier Four of the Women’s game last season and will be hoping to make an impact for Watford in the upcoming campaign.

All three of the newly-recruited Golden Girls will be hoping to make their debuts on Sunday as Watford host Cardiff City Ladies at Kings Langley on the opening day of the 2018/19 National League South season.

"They need a lot of tender love and care": Key quotes from Roy Hodgson after relegation with Watford 11 days ago

&quot;I don&#39;t have an answer&quot;: Key quotes from Roy Hodgson after Watford defeat a month ago

The Warm Down: Leeds United defeat Watford in crucial relegation clash a month ago

Watford 0-3 Leeds United: Hornets architects of their own downfall in defeat a month ago

Watford v Arsenal preview: How to watch, kick off time, predicted lineups and ones to watch 2 months ago

Opinion: Three games into his Watford tenure, Hodgson should be doing his talking on the pitch 3 months ago

"Criticise us for being too gung-ho": Hodgson frustrated at nature of Watford's defeat to Brighton 3 months ago