Tottenham Hotspur suffered their first defeat since the Champions League final as they were beaten 2-1 by Manchester United in the 2019 International Champions Cup.

Both sides gave a range of different players an opportunity to play in this one, most likely due to the extremely hot weather conditions in China.

United had the better of the first half, Anthony Martial giving them the lead, although Spurs scored a deserved equaliser in the second half through Lucas Moura before Angel Gomes won it for Ole Gunnar Solskjaer's side with 10 minutes to go.

Mauricio Pochettino gave many of his youngsters another chance to shine in this one, just as he did in the previous fixture against Juventus.

Over the two games, 17-year-old Troy Parrott has shown some very promising signs, playing against tough opposition at such a young age, yet he was involved in both fixtures, with his hold up play and work rate on show once more in the defeat to the Red Devils.

Oliver Skipp is another one who used the game to show his manager what he is capable of, he has the ability to take control of the game, winning the ball back aggressively and often won second balls to get his side in possession.

Harvey White, who usually plays in midfield, showed his versatility with an impressive performance at left-back, his cross eventually saw Lucas score an equalising goal whilst he presented the Brazilian with another chance just before the end of the game in which he nearly got his second of the game. 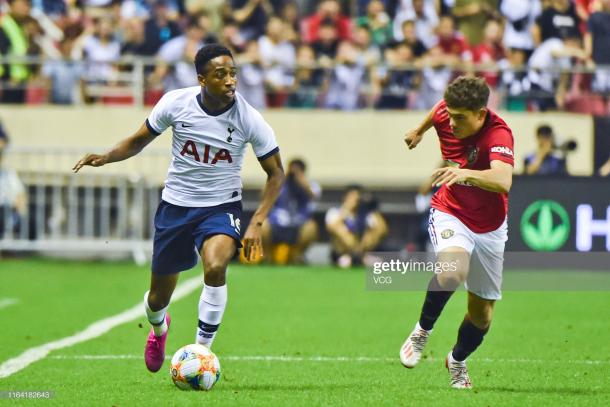 Spurs need to address their fullback situation as soon as possible

Something that was apparent once more in the game against United on Thursday is the issue Spurs currently have with their fullbacks.

Despite being their number one left-back in the last campaign, it seems as though Danny Rose will be leaving North London as the club look to let him go, even if that wasn't to happen he has not been with the squad in their Asia tour which shows the current stance on Rose.

His backup, Ben Davies, is currently injured so has not got any minutes under his belt in pre-season so far, with just two games to go for Spurs.

Pochettino's side are being heavily linked with Fulham's youngster Ryan Sessegnon, with the deal looking likely.

Although, Sessegnon would not be expected to come in and perform at left-back to the standards of Rose, so Spurs may well be worse off in terms of their left-backs in the forthcoming season.

Anthony Georgiou and White played in that position against United, the former having a fairly poor game and neither seemingly ready for Premier League action, yet they have been the ones playing so far this pre-season.

Kieran Trippier recently made his move to Atletico Madrid in a deal worth just over £20 million, so it seems as though the right-back position could also be weaker in the 2019/20 campaign as well.

Speaking after the 2-1 defeat against United, the Spurs boss was pleased with what he has seen from his side in pre-season thus far.

"The performances in the two games were fantastic, I’m so happy," he said.

“We were a little unlucky as I think we deserved at least a draw but the behaviour of the players on the pitch was fantastic.

“United are advanced in their preparation, they started on the first of July, we started between the eighth and 12th and that period is massive this week.

“We are building our fitness and the way we want to play next season and there have been lots of positives. This has been a very positive experience.”

Another positive for Spurs would have been seeing record transfer Tanguy Ndombele make his first start for the club, he played in the first half and added more physicality to the midfield, whilst his ability to pick out a pass helped move his side further up the pitch.

Spurs have two weeks left to bring players in, so the fans will not be waiting for much longer to see if the likes of Sessegnon are brought in, as well as the likes of Giovani Lo Celso and Paulo Dybala who are being linked.

Why has Troy Parrott not been given a proper opportunity at Spurs yet?21 days ago

Son of Teemu Tainio leaves Tottenham Hotspur academy to play under his father in Finlanda month ago
Restore your password
Please enter your user name or email.
Login Member or Writer Panel
Enjoy your own Customized Newspaperwith VAVEL topics' carousels!