Thank you for joining our live commentary, updates and analysis of this Europa League encounter.

Whilst Aberdeen prepare for the beginning of their SPFL campaign and a trip to Croatia in the next Europa League qualifying round, Chikhura have a bit of a journey home...

Two flights on the way here saw them rack up over 6,000 air miles.

The beauty of the Europa League...

20:41a year ago
A fact to leave you with... Sam Cosgrove is just the fourth Aberdeen player to net a European hat-trick.

Bar 15-20 minutes at the end of the first half, that was impressive from Aberdeen.

Ferguson and Cosgrove were sensational.

The hat-trick hero is replaced by Bruce Anderson.

Let's remember, he failed to score for Wigan, Barrow, Chorley and North Ferriby United in a combined total of 21 games.

In fact, he scored just one goal (for Carlisle) in 39 games before last season.

80' It's now six in four for Cosgrove as he completes his hat-trick and maybe confirms the Man of the Match Award.

We have seen some goals tonight and this is another great one with the outside of the boot.

Man of the match?

There have been several impressive individual performances tonight... 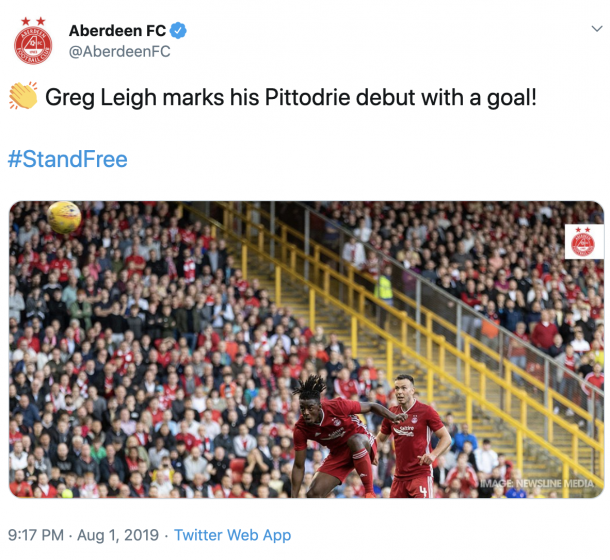 Invalid dateInvalid date
20:18a year ago
74' Gallagher heads over from another Aberdeen corner with Chikhura all over the place.
20:16a year ago
Yes, this isn't the toughest opposition but Aberdeen fans have got to be impressed by the way their side have played in large chunks of this contest.
20:12a year ago

All for Lewis Ferguson! What an individual performance.

The striker is hunting more Europa League goals but he cannot direct his header past Hamzic.

McGinn is then rested ahead of Sunday's SPL opener against Hearts. Scott Wright on.

57' We have just praised the performance of Ojo after arriving from Scunthorpe and now two more new faces have combined to send Aberdeen through.

More tireless work from Jon Gallagher, on loan from Atlanta United, forces a corner before Ferguson picks out Greg Leigh to score on his debut.

The left-back, another loanee, has scored in every season of his professional career.

Pittodrie's new defensive midfielder has been particularly impressive tonight, allowing those in front of him to express themselves with confidence.
19:57a year ago

A double substitution. Chikhura don't have much of a history (just two trophies in the cabinet) and they need to do something quickly if they are going to add a Bursaspor-type story to their repertoire tonight.
19:55a year ago
...then the plans for Croatia and a trip to HNK Rijeka can commence.
19:54a year ago

49' Hamzic is the most erratic goalkeeper but has a bit of quality about him.

Not for the first time tonight he drops a dangerous cross but he made up for it by reacting quickly to keep out Jon Gallagher.

Another Aberdeen goal and the tie is over...

The response to that opening Aberdeen salvo in the first half has been positive on social media. However, there are still concerns about how often the Dons sit back before the break.
19:49a year ago

46' Cosgrove almost beats Hamzic from an improbable angle but is thwarted by the smart reactions of the Bosnian.
19:48a year ago

Another flying start for the hosts? Let's hope so.
19:48a year ago

That first half arguably summed up Aberdeen's SPL campaign last season where they just could not put together enough consistency throughout the year.

The Dons finished fourth in the Scottish top flight but should certainly be aiming for third this year, even if Celtic and Rangers are a class above the rest.

If they can maintain the quality they showed in the opening 25 minutes on a regular basis, they should close the gap on the top two.

Chikhura stemmed the tide in the last ten minutes of the first half but the damage looks to have been done already.

Aberdeen played with such intensity in the opening 25 minutes to romp into a 2-0 lead, 3-1 on aggregate.

19:22a year ago
Chikhura finally growing into the game but they are showing no real threat despite an extended spell of possession.
19:16a year ago

The attacking onslaught continues with the Georgians penned in.
19:12a year ago
24' Cosgrove fires high and wide in search of a third.
19:09a year ago

22' Can anyone stop Cosgrove in this competition? A bullet diving header gives the Scots a nice cushion and just reward for a high tempo start.
19:06a year ago
18' McGinn also looks a handful, forcing another save from Hamzic after cutting in from the flank.
19:05a year ago

Sam Cosgrove continues his record of scoring in every Europa League qualifier for Aberdeen this season.
19:04a year ago
13' Ferguson is proving the key threat for Aberdeen, playing a supporting role in the goal and showcasing his skills in the ten minute previous.

He produces a nervy moment for goalkeeper Hamzic who appeared to haul the midfielder down in the penalty area.

9' The work in the wide areas pays off as Ryan Hedges is released by Lewis Ferguson before finding Sam Cosgrove in the penalty area who finished the move off with a deflected strike into the corner.
18:56a year ago
7' Aberdeen looking a particular threat down the flanks.
18:52a year ago

2' We suggested this could be a match to remember and it has started that way. Aberdeen captain Joe Lewis is forced into an early save before Niall McGinn is thwarted by a block after a fast opening from both sides.
18:46a year ago

They’ve done it before

Don’t expect this to be a walkover for the Scots. If Chikhura’s home performance wasn’t enough, they also have experience of beating good opposition in the form of Bursaspor at this stage of the competition, albeit five years ago.
18:37a year ago

A long way from home

Bosnian goalkeeper Dino Hamzic is the only Chikhura player not from Georgia.
18:35a year ago

Here is the Chikhura eleven

Change in the commentary box

Late replacement as Chris Lincoln takes over with the live updates from kick-off. Thanks to Alan for previewing this intriguing encounter.
18:28a year ago

Aberdeen went very close to reaching the third and final qualifying round last season, only edged out by Burnley after extra-time.

The tie was brimming with entertainment as Aberdeen held their own despite being huge underdogs. They eventually lost 4-2 on aggregate but will hope for a reverse of that result this evening.

18:22a year ago
Chikhura Sachkhere and Aberdeen drew in their last match against one another, as a draw has just an 18.2% chance of occurring again in this qualifying match.
17:40a year ago

Aberdeen starting line-up: Lewis, Logan, Leigh, Considine, McKenna, McGinn, Hedges, Ferguson, Gallagher, Ojo, Cosgrove.
16:44a year ago
Do not miss a detail of the match with the live updates and commentaries of VAVEL. Follow along with us all the details, commentaries, analysis and lineups for this Aberdeen vs Chikhura Sachkere match.
16:44a year ago

One good play or defensive miscommunication can end in a goal for the Georgians that can change the tie upside down. For that reason, Aberdeen will be hoping for an early goal to settle the nerves and a repeat of the home performance of the first 80 minutes of the previous round.
16:44a year ago
The central referee for this match will be Slovak Rade Obrenovic.
16:43a year ago

How to watch Aberdeen vs Chikhura Sachkere live TV and Stream

If you want to live stream it: Red TV suscribers outside the UK and Ireland can watch the game.

If you want to watch in on internet, VAVEL is your best option!

“We are not afraid of the fact that the Aberdeen stadium will be full. On the contrary, the full stadium and the football atmosphere will give us greater inspiration and motivation to do as much as possible and get to the next level.”
16:42a year ago

A lot of injuries

An early-season defensive crisis has done little to help their cause. With new left-back Greg Leigh injured in pre-season, the Dons have also lost centre-backs Ash Taylor and Michael Devlin to knocks. While veteran Andrew Considine can provide more than adequate cover to partner Scott McKenna, it may also mean Jon Gallagher moving to right-back.
16:42a year ago

Aberdeen’s 1-1 draw in the Georgian capital puts the Scottish squad as today’s favourites to make it past this stage. However, it is evident that they will have to improve on last week’s performance to ensure qualification for the next round
16:42a year ago

Last Thursday, the Dons returned from Georgia with an away goal advantage, after not the most brilliant football display.
16:41a year ago
Today’s match represents the definitive clash for Aberdeen to secure a spot into the next UEFA Europa League qualifying round.
16:41a year ago

The tactical downfall of Derek McInnes9 months ago

Hearts (3) 2-2 (0) Aberdeen: Jambos through to the semis on penalties9 months ago

Aberdeen 1-1 St Johnstone: Saints well worth a point at Pittodrie10 months ago

Derek McInnes: Is he the right man to take Aberdeen forward?10 months ago

Evolution of Sam Cosgrove10 months ago

Kilmarnock 0-0 Aberdeen: Little inspiration or quality as both sides share the pointsa year ago