Tottenham Hotspur have opened talks with Sporting CP over the possible transfer of Bruno Fernandes, according to Sky Sports News.

The midfielder has been linked with Manchester United for most of the summer, although Spurs have sent officials out to Portugal to open talks with Sporting to potentially hijack a move to Old Trafford.

It is believed that this deal is in the early stages and at the moment no fee has been agreed, with this being another option for Mauricio Pochettino if Spurs fail to bring in Giovani Lo Celso as they struggle to meet Real Betis' valuation for the Argentinian.

Pochettino plays down transfer frustration and insists Spurs will 'be competitive'

Speaking before the rumours regarding Fernandes were released, the Spurs boss seemed much calmer when speaking to the media in comparison to when he had previously seemed to show his frustration with the lack of transfer activity.

After his side won the 2019 Audi Cup final against Bayern Munich, he said this:

"We need to be relaxed and calm. I am so happy. I hope we have a very good season. The most important thing now is to show respect for the club. We are trying to bring the best team possible. We are going to work hard to make our fans happy and be competitive.

It’s a challenge at a club like Tottenham but we are going to work together. After five years we have built a very good relationship with Daniel Levy."

Pochettino will be hopeful of adding to his squad after bringing in Jack Clarke and Tanguy Ndombele for a club-record fee, with Fernandes seemingly an option. 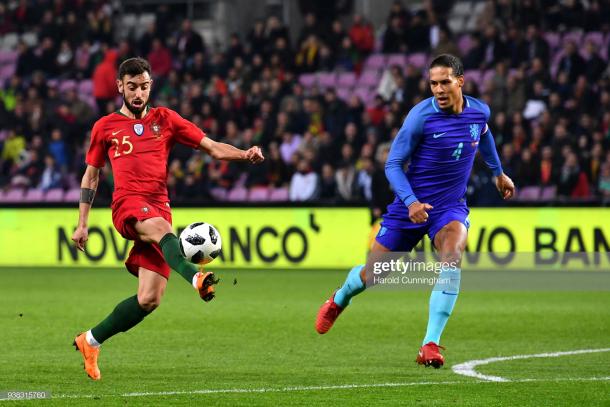 Why is Fernandes attracting so much attention?

The Sporting captain is expected to leave the club this summer.

Whether that will be to Spurs, United or any other club, he is certainly attracting plenty of attention and Sporting will not let him go for anything less than £60 million.

The 24-year-old began his career in Italy, having spells with Novara Calcio, Udinese, Sampdoria.

His time at Udinese, contributing to 24 goals in 95 games got him a move to his home country with Sporting.

Since signing for them, Fernandes has played just over 100 games, whilst having an impressive record of 48 goals and 38 assists.

Harry Kane: 200 and far from outa month ago

Why has Troy Parrott not been given a proper opportunity at Spurs yet?2 months ago
Restore your password
Please enter your user name or email.
Login Member or Writer Panel
Enjoy your own Customized Newspaperwith VAVEL topics' carousels!