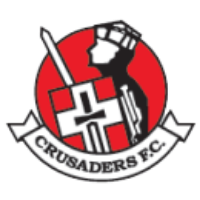 Full-time at Seaview, Belfast, with Wolverhampton Wanderers beating Crusaders FC by 4-1, 6-1 on aggregate in a game that had little history.

Wolves will now face the armenian team Pyunik FC in the 3rd qualifying round of the Europa League.

77' - Own goal by Jordan Forsythe who heads it the wrong way after a cross by Moutinho. 4-1 is the score so far.
21:32a year ago
74' - The northern Irish players try to piece together a few attacking plays but are unable to create real scoring chances.
21:24a year ago

66' - Out comes Diogo Jota, in comes Ruben Vinagre
21:20a year ago
62' - With the outcome of the tie almost settled the intesity diminished drastically.

Wolves keep rotating the ball, trying to find an opening, whereas the Crusaders defense try to keep the score at 3-1.

53' - First substitution of the game, out comes Jímenez and in comes the youngster Morgan Gibbs-White.
21:10a year ago
50' - Jímenez has been down for several minutes after a harsh tackle by a defender and it seems that Gibbs-White will come on.
21:03a year ago

And we are back on our way! No substitutions at half-time from either side.
20:51a year ago

Crusarders still managed to score first but so far it's been Wolves' game, dominating every aspect of the game.

44' - What a rocket by Jímenez! The mexican striker scores his second of the night with a great shot from outside the box into the top right-hand corner! Great play between him and Diogo Jota making it 3-1 !
20:40a year ago

38' - Goal by Bennett! Corner taken by Moutinho who crosses it to the near post and Bennett heads it in making it 2-1!

4-1 on aggregate and it seems that it'll be Wolverhampton who advances to the third qualifying round.

Nuno's men are pressuring the irish defense who seems tired.

20:30a year ago
27' - Crusaders renounce the ball and instead decide to defend with a 5-4-1 formation, leaving Jordan Owens alone, fighting for space against Wolves' strong back three
20:23a year ago
20' - Great game so far with both teams having several chances. Crusaders look like a different team from the one that played at the Molineux playing a more direct style of football with long passes to their striker.
20:20a year ago
Correction: Crusaders' goal was an own goal by Bennett and not by Coady.
20:18a year ago

14' - Goal by Raul Jímenez! Moments after celebrating their goal, the Crusaders fans saw the mexican striker score his first goal of the season, making it 1-1 on the night and 3-1 on aggregate!
20:15a year ago

13' And it is 1-0 to Crusaders FC! A great cross on the right side by Jordan Forsythe and it's an own goal by Coady!
20:08a year ago
6' - Wolves dominate the ball but so far its been the northern irish team that has had the best chances with two shot on goal already.
20:04a year ago
1' - One minute in and Rory Hale with a great chance for making it 1-0 to Crusaders but the ball is cleared at the last second.
20:01a year ago
0' - And the game is underway with Wolverhampton having possession of the ball.
19:59a year ago
Both teams have entered the pitch and we are moments away from the beginning of the match!
19:40a year ago
Crusaders make just one change when comparing with the game at the Molineux with Jordan Owens taking Declan Caddell's place in the starting eleven.
19:13a year ago

This game marks Nuno’s century for Wolves. It seems like much longer considering what he has achieved, guiding Wolves to Championship promotion and then a top seven Premier League finish. Not a bad first ton.
19:05a year ago 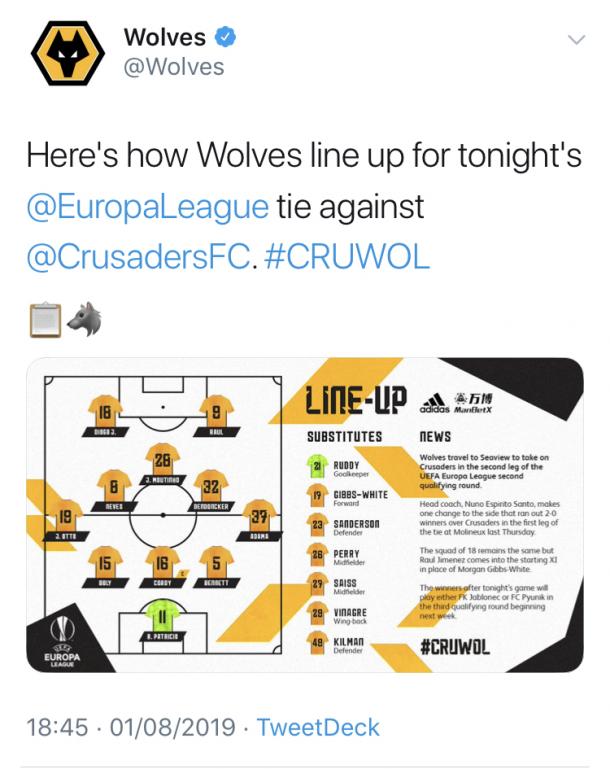 There is only one change from the side that won 2-0  in the first leg with Raul Jimenez replacing Morgan Gibbs-White.

17:53a year ago
Do not miss a detail of the match with the live updates and commentaries of VAVEL. Follow along with us all the details, commentaries, analysis and lineups for this Crusaders vs Wolves match.
11:49a year ago

How to watch Crusaders vs Wolves live TV and Stream

This game is live on Premier Sports but for a free, in-depth analysis with live team news, commentary and match updates, join us at VAVEL UK for the 20:00pm BST kick-off.
11:48a year ago

Either FK Jablonec from Czech Republic or Pyunik from Armenia await in the third qualifying round, just one step away from the competition proper.
11:48a year ago

Could the pitch be a danger?

No professional footballers like to play on an artificial pitch at the best of times, particularly with just over a week until the start of the Premier League season.

Nuno Espirito Santo has told the BBC that his side have to ‘adapt and perform but some of the players don’t have that experience’ when it comes to an artificial pitch.

Whilst Wolves could name a handful of youngsters in their starting eleven, Crusaders boast no less than five players with over 250 appearances for the club.
11:47a year ago

The Belfast side were disappointed to finish fourth in the Irish League last season after winning the competition the season previous. However, they impressed in knockout tournaments, winning both the Irish Cup and County Antrim Shield.

The majority of the squad are semi-professional, underpinned by their 9-0 aggregate hammering in Champions League qualification by Ludogorets last season.

Eight seasons ago, they famously played Fulham in 2011-12 Europa League qualification but lost 7-1 after two legs.

In 45 European fixtures, they have won just seven and lost 30, conceding 128 goals.

Keep an eye out for the club’s all-time top goalscorer, Jordan Owens, who has scored 169 goals in 369 appearances after spending his entire career at the club. Stuart Dallas of Leeds United is currently their most famous former player.

Nuno Espirito Santo named a very strong squad for the first leg but you would expect him to rest a handful of players here. Ruben Neves has travelled after picking up an injury at Molineux but new signings Jesus Vallejo and Patrick Cutrone have not made the trip to Belfast.
11:47a year ago
Wolves battered their visitors from Northern Ireland with 30 shots to Crusaders’ one. Dominating possession, the Premier League side were expected to run away with the contest when Diogo Jota opened the scoring on 37 minutes but they struggled to break down a stubborn defence.

However, a 93rd minute strike from Ruben Vinagre ensured Wolves go into the second leg with a comfortable advantage.

Welcome along to live coverage on VAVEL UK of tonight's Europa League qualifier between Crusaders and Wolves from Seaview. I’m Chris Lincoln and I will be taking you through all the action.

The Review: Wolves' opening 10 games a day ago

Liverpool vs Wolves: Pre-match analysis a day ago

The Warmdown: A clinical performance from Wolves earns them all three points at the Emirates 6 days ago
Restore your password
Please enter your user name or email.
Login Member or Writer Panel
Enjoy your own Customized Newspaperwith VAVEL topics' carousels!