Luton Town managed to grab a draw against Middlesbrough in the final 10 minutes after a poor piece of defending led to James Collins opening his account for the season.

Former-Watford striker Britt Assombalonga, having skied his penalty well over the bar was left to rue his missed opportunity as Luton equalised just minutes later.

Two fantastic outside-of-the-box strikes, one from Sonny Bradley of Luton and one from Lewis Wing of Boro helped the season to get off to an electrifying start.

The game was not short of drama or controversy either, with Luton feeling they should have had a penalty of their own after Dan Potts was brought down in the box.

A game of twists and turns

Boro took the game to Luton right from the first whistle and were rewarded with their high intensity when Ashley Fletcher found the net inside 10 minutes.

The Luton fans responded to the Boro goal with passion and spurred on their team to take control, before taking the roof off Kenilworth Road when defender Sonny Bradley's unstoppable half volley rocketed into the top left corner.

Debutant Martin Cranie then put Luton into the lead with a brilliant header from an Andrew Shinnie corner in the 24th minute.

Boro responded well, once again pressing Luton high which caused Shinnie to lose the ball on the edge of the area. Assombalonga was sent through and his tame shot snuck past Luton's record signing Simon Sluga in goal.

Sluga kept his nerve though in one of the toughest environments to make a mistake in the league, pulling off some fantastic saves - just as his opposite number Darren Randolph was doing for Boro.

Former West Ham United academy product Dan Potts could have been given a penalty in the 57th minute when Lewis Wing brought him down in the area - but the referee waved away the home side's protests.

Shortly afterwards, Wing collected the ball facing towards the right corner flag on the edge of the area, and curled his shot fantastically into the net giving Sluga no chance.

Luton were looking down and out when Cranie brought down youngster Hayden Coulson which was adjudged to be inside the area. However, Assombalonga smashed his penalty over the bar and the atmosphere inside Kenilworth Road was turned up even more.

In the 85th minute, Republic of Ireland international James Collins received the ball in the area after a rash piece of defending from Boro lead to Collins, unmarked in the box, guiding home a rebounded effort to make it 3-3.

It may take a little more time for new record signing for Luton Simon Sluga to settle in. He showed glimpses of quality but his howler lead to Assombalonga equalising for Boro and he was visibly furious with himself and he knew he could have done better.

Irish striker James Collins is on a mission to prove he is good enough to play in the Championship, and he definitely gave his doubters a taste of his true ability.

The 28-year-old showed terrific ability to hold the ball up and bring his team into the game especially when Boro were pressing hard - and he was rewarded with a goal for his efforts.

Woodgate sent his team out to press Luton's midfield and backline from the first minute and Assombalonga, Fletcher and Marvin Johnson all showed fantastic work rate and determination.

Boro were rewarded with their work ethic when they caught Shinnie on the edge of his own area and were given a stroke of fortune when Sluga made a mess of Assombalonga's shot in the same move.

Goalscorer Sonny Bradley believes Luton should have won the game against Boro and blames the sloppy goals they conceded.

"I'll take it. I felt we could have won so there's a disappointment but we have to be happy with a point," said Bradley.

"We created our own problems, we gave away possession, and formation wise I was happy.

"It was just sloppy goals." 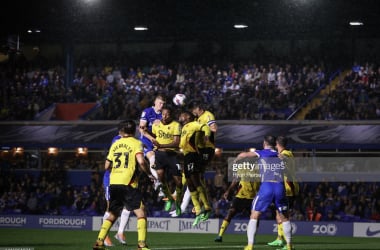 Birmingham 1-1 Watford: How did the Watford players rate against the Blues? 2 days ago

Who are the best wingers in Marco Silva’s Fulham team? 2 days ago

Stoke City vs Middlesbrough: Championship Preview, Round 4, 2022 2 days ago