Millwall takes on Hull at The Den this weekend looking for their third win of the season.

The Lions have won both of their home games so far without conceding and are looking to continue that perfect record against Hull City who have lost their last two league matches.

Neil Harris's side were knocked out of the EFL Cup this week losing on penalties despite being 2-0 up at Oxford with just six minutes to go. The Millwall boss made eight changes for that game but was impressed with his side's performance.

Hull were also beaten on penalties after a 2-2 draw in the EFL Cup in the week. Preston knocked out the Tigers.

Millwall welcome back Jed Wallace who completed his three-match suspension at Oxford on Tuesday night. He is likely to go back straight into the starting lineup against Hull on Saturday. Neil Harris, however, does have some selection questions. Jayson Mulomby and Billy Mitchell both impressed while Jon Dadi Bodvarsson scored twice and  Tom Bradshaw is also pushing for a starting berth.

Hull have a couple of problems heading into the match. Grant McCann has confirmed that Daniel Batty and Brandon Fleming are both ruled out. Batty is awaiting the results on a scan on his ankle, while Fleming is ill and being kept away.

The sides met three times last season. Twice in the league and one in the FA Cup. Hull were unbeaten in both league ties, getting a 2-2 draw at The Den before beating the Lions on Humberside. The FA Cup meeting in early January ended in victory for Harris' men.

"We've had a positive start in the League and given ourselves a foothold in the division already, and we want to follow that up now. It's not going to be easy against Hull - they're a good side with talented players - and Grant [McCann] has put his stamp on the team there. When you've got players like Grosicki and Bowen at this level, you've always got a chance to score goals."

“We’re really pleased with how we’re playing and I feel as though we have been a tad unlucky so far in certain games this season,” he said.

“Yes, we haven’t picked the results up, which has been frustrating for everyone, but the performances have been there.

“We’ve got to continue that though because if we keep performing as we have been, we’ll definitely win more games than we lose and put ourselves in a healthier position."

The Warmdown: Lacklustre performance see Foxes lose away in Ukraine 8 hours ago

Swansea City vs Luton Town preview: How to watch, kick-off time, team news, predicted lineups and ones to watch 7 hours ago 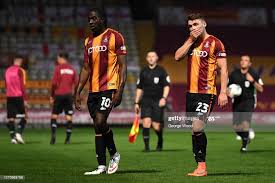