Charlton Athletic will host Derby County tomorrow in a match which, if results go their way, could see the Addicks sneak into the playoff spots. Charlton have made an exceptional start to Championship life, sitting comfortably in 10th place and impressing with their full-throttle, attacking football under Lee Bowyer. Another landmark victory against Derby County tonight - after stunning promotion favourites Leeds United and holding a star-studded Fulham side to a point at Craven Cottage - and whispers of the playoffs may well begin to amplify.

Up at Pride Park, however, it has been somewhat of a baptism of fire for new manager Philip Cocu. The Dutchman has seen his side’s start to the season dominated by the calamity that was the drink driving scandal involving three key players in Mason Bennet, Tom Lawrence and Richard Keogh. It’s a state of disrepute that the club may struggle to shake off for quite some time, especially with news emerging this week that Lawrence and Bennet will face 180 hours of unpaid work.

The Rams, who made the playoff finals last year, are currently languishing in 13th, six points behind bitter rivals Nottingham Forest whom they will meet in three weeks time. With the likes of Harry Wilson and Mason Mount returning to their parent clubs, Derby have looked thin on the ground this season as Cocu finds his feet in the Championship. The board have insisted the Dutchman will be given sufficient time to rebuild the squad and turn results around, but the general feeling among the fan base is one of apprehension for what could potentially turn into a painful, onerous season.

Charlton are without several key players through injury for the match tomorrow. Summer signings Beram Kayal and Tomer Hemed are highly unlikely to feature, while Lewis Page is sidelined with a long term hamstring injury. “They are back to training but fitness-wise, they are off,” Bowyer said of Hemed and Kayal to the News Shopper. Left-back Ben Purrington may return to the team however, he has been out with a groin and calf problem.

For Derby, Polish centre-back Krystian Bielik and right-back Jayden Bogle are minor doubts for tomorrow with both of them sidelined through injury for their respective nations during the international break. Skipper Keogh is obviously unavailable after the ACL injury he obtained in the car crash, while Jack Marriott’s fitness will be monitored closely after a minor muscle issue left him watching from the stands in Derby’s previous two fixtures.

Charlton’s first half performance in the 1-1 draw at Craven Cottage before the international break was arguably the best we’ve seen of a Championship side this season. It spoke volumes of the spirit of this Charlton side, the belief, the energy, but also the tactical acumen of Bowyer.

Charlton, under Bowyer, have always tried to deploy a fairly aggressive press, but this ethos was taken to to a whole new dimension at The Cottage where Charlton did what very few teams have been able to do this season, prevent Fulham from playing out from the back. 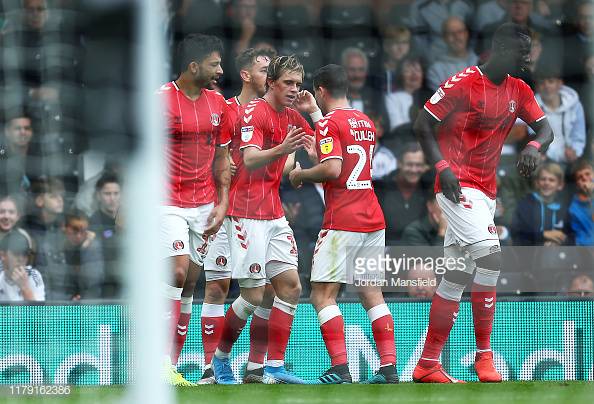 Bowyer set up his side in a 3-5-1 formation, with the two wing backs - Jake Forster-Caskey and Chris Solly- pressing forward on to Fulham’s full backs when out of possession. Macauley Bonne and Williams also pushed onto the centre-halves,  leaving Fulham four on four at the back.

Fulham seemed lost, confused, and began to panic on the ball - after all, Scott Parker’s philosophy revolves around building play from the back and Charlton had stripped that option away from them.

Although Parker had yet to deliver a tactical blow of his own. Presumably after a halftime team talk from the Englishman,  Fulham began to exploit a gaping weakness in the Charlton system. By pressing high up the pitch, Charlton’s wing-backs had left acres of space on the flanks which neither the centre-midfielders nor the wide centre-halfs were covering.

Derby have, at times this season, displayed a stubborn adherence to playing out from the back - even in the face of a high-pressing side like Leeds. This dogma has often left them with all sorts of  problems, with the defence regular culprits for over-complicating their passing.

Bowyer will most likely replicate his  pressing system tomorrow, perhaps with a few tweaks to the system to minimise space in the wide areas. The question is whether Derby will stay true to Cocu’s  belief of playing out from the back, or combat the press by playing more directly and looking to release the forward men into the gaps between the defence and goalkeeper. Should the Rams get their approach wrong, things could get very messy.

Cocu, however, seems prepared for a Charlton onslaught. “The next couple of games we will be facing all kinds of styles of football, systems, and we must be capable of dealing with it,” he told Rams TV.

The Dutchman was also keen to dispatch the idea of a malaise engulfing the club, insisting his players are fully focused on their forthcoming matches. “ We’ve really stepped up in training, players are getting more involved, the results are better so the atmosphere in the team is progressing ”

Bowyer has mirrored his counterpart’s buoyant views this week, explaining to London News Online his delight with the start his side have made, he said: “I’m happy with the way things have gone. Not just the points on the board, we’ve played some top sides and every single game we’ve been in it.”

However, despite their emphatic start, Bowyer feels that Charlton’s priority for this season is mere survival. “If you break it down we’re nearly a quarter of the way through the season,” said Bowyer. “We’ve got 18 points and that’s not bad. We’re ahead of schedule. We need to get to 45.”

Norwich City 2-1 Sheffield Wednesday: The Canaries stay top of the Championship after late fight back 2 hours ago

Reading 2-0 Nottingham Forest: Joao and Morrison send Royals up to second in the table 5 hours ago

Millwall vs Derby County preview: How to watch, kick-off time, team news, predicted lineups and ones to watch 20 hours ago

The Review: Wolves' opening 10 games a day ago

Norwich City vs Sheffield Wednesday preview: How to watch, kick-off time, predicted lineups and ones to watch a day ago