Since their World Cup exit, Phil Neville's Lionesses squad have only picked up a single win. Practically gifted a goal by Portugal, England overturned a much weaker side 1-0 away from home. Since the 2-1 defeat to the USWNT in France, it's been a slide.

Neville's future will most definitely be in question if they cannot show their colours. They must return to past form against Germany and the Czech Republic, especially in the former which is to be played in front of a sold-out Wembley Stadium, a record for the women's game. The Lionesses announced their squad on Tuesday. Aoife Mannion has departed after suffering a horrific ACL injury versus Atletico Madrid in the Champions League.

The main talking point that arose from the encounters against Brazil and Portugal was that of the weak defensive play shown by the Lionesses, with a number of simple mistakes being made from the backline.

Although she is one of the better defenders in the world and the captain of the national team, Steph Houghton often looked as if she was a liability for England and has also done for her domestic Manchester City. Aoife Mannion looked as if she would be able to provide a fresh change at the back alongside Arsenal's Leah Williamson as seen in Neville's experimentation, but this will of course now not be able to happen.

Abbie McManus has been a part of a Manchester United defence that have only let in two this year whilst playing against tough sides such as Arsenal and Manchester City, and could provide another option for Neville.

As well as defensive difficulties, England have seemed as if they have not been clinical enough in front of goal in their past matches - one possible reason for this is the loss of both Ellen White and Georgia Stanway. Jodie Taylor stepped up and was able to score, but something is still obviously missing.

Ellen White, Georgia Stanway and Gemma Bonner have joined their teammates to train for this camp, and the manager will assess whether they are fit enough to be able to feature in any of the games. 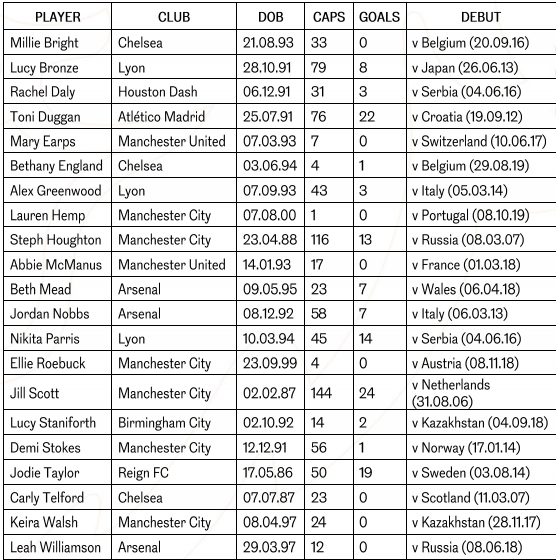 West Ham United Women vs Manchester United FA WSL Preview: Kick-off time, team news, ones to watch and how to follow 4 days ago

Reading vs Manchester City FA WSL Preview: Kick-off time, team news, ones to watch and how to follow 4 days ago

Although they have only recently joined, the off-the-pitch impact of the WSL's USWNT additions is already evident 12 days ago

Chelsea FC Women vs Manchester City Women: WSL Preview: Kick-Off time, team news, ones to watch and how to follow 10 days ago

England women to face Norway at Bramall Lane 12 days ago

"If people aren't talking about you, then you're not doing the right thing" - Casey Stoney ahead of facing Tottenham in the FA WSL 12 days ago