That's all from us here but make sure you stay tuned to VAVEL throughout the week for all the reaction to tonight's game!
20:27a year ago

A picture that sums up United's game. Dalot distraught at his last-gasp effort which almost saw them snatch three points. 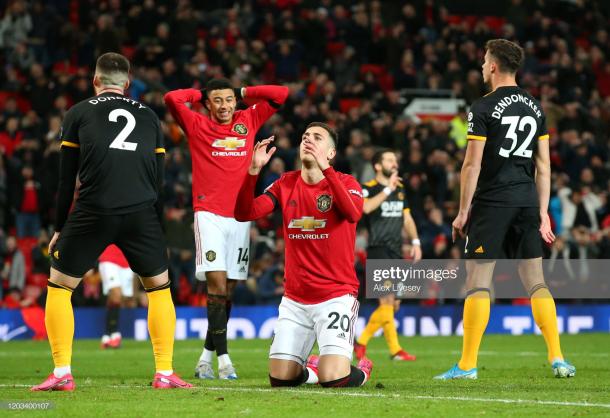 And there's the full-time whistle!

Both teams had their fair share of chances but in the end, a draw seems the correct result.

94': Dalot almost scores at the death!

Fantastic by Wan-Bissaka who finds Dalot with a cross and he heads just wide! Agonising for United.

90': Four minutes added on. United are pressing and pressing.

86': Another chance for United!

Free-kick is crossed in and the ball falls for Maguire, who is free in the box but doesn't catch it well and wins a corner.

Double sub for United as Lingard and Dalot come on for Mata and James.

83': Shaw is now booked for a cynical tackle on Podence, who looked to catch United on the break.
20:06a year ago

Greenwood cuts in on his left from 25 yards out, he takes a shot at goal which deflects off Boly and fortunately for Wolves, goes straight at Patricio.

Lindelof also in the book now for United.

75': Problems for Wolves as Adama Traore goes down injured, much to the annoyance of the United support.

71': Huge roars from the home fans as Mason Greenwood comes on for Andreas Pereira.
19:59a year ago

70': Moutinho receives Wolves' second booking of the game for a deliberate handball.
19:57a year ago

68': Traore powers forward once again, barging through the United defence.

He releases Jimenez on the right and from a tight angle he fires an effort towards goal, forcing a good save from De Gea.

United have huge appeals for a penalty turned down and almost instantly, Wolves break but can't get a shot away to test De Gea.

Wan-Bissaka weaves through the Wolves defence and lays it off to Mata, who drives an effort at goal but is inches away from opening the scoring.

57': Fernandes tees up the resulting free-kick and goes for power, but it's easily saved by Patricio.
19:44a year ago

56': And straight after that, Wolves receive their first yellow of the game.

Neves slides in on Mata and brings him down 30 yards from goal.

55': Debutant Bruno Fernandes receives the first booking of the game and the first of his United career for bringing down Jimenez on the half-way line.
19:41a year ago

Jota does so well to get past Lindelof. He looked through on goal but scuffs the shot before taking a tumble in the box. Huge let off for United.

49': Huge appeals for handball in the box by Wolves!

Jota plays through Jimenez, who was beaten to the ball by Wan-Bissaka who clears the ball off Jimenez. It clips Wan-Bissaka's hand but it would have been harsh if given.

46': Back underway at Old Trafford. No changes for either side but it looks like United have had a reshuffle in formation.
19:25a year ago

Nuno will be the happier of the managers in the dressing room at the break. Should Ole change it up at half-time?
19:22a year ago 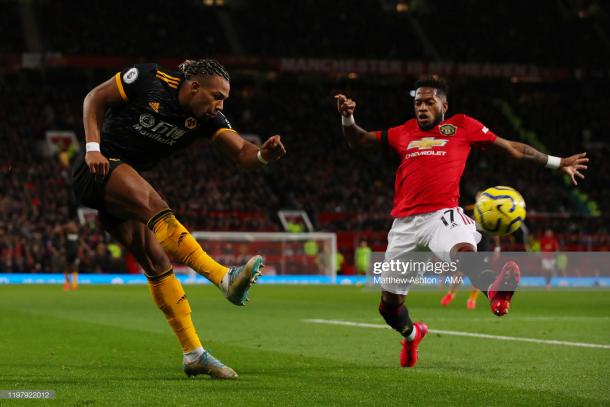 Goalless at the break. A half of few chances but Wolves have been the better side so far.
19:15a year ago

39': Fernandes has two efforts on goal saved by Patricio!

The ball is played across to the Portuguese man just outside the box, but the strike is straight at the Wolves 'keeper.

He has another effort on goal seconds later, but it's scuffed and rolls to Patricio.

They break on the right once again as Jota finds Traore, he pushes forward into the box but fires an effort just wide.

30': Neves steps up confidently, but the free-kick ends up in the Stretford End.
18:59a year ago

25': Maguire, who had visions of his goal against Tranmere, shoots from distance and it ends up closer to the corner flag than the goal.
18:53a year ago

22': Fantastic football by Wolves. A neat passage of play sees Doherty through on the right, but his ball across is cleared away by Maguire.
18:50a year ago

Corner comes in to the back-post, it's looped across via the head of Doherty and De Gea has to claw it away before the ball nestles in the top corner.

Good one-two between James and Mata puts the latter through on the right, whose deflected pass falls to Pereira but the Brazilian scuffs his shot wide.

15': Moutinho is down injured after being on the receiving end of a tackle by United new boy Bruno Fernandes. Looks like he'll be OK to continue.
18:44a year ago

13': Traore once again takes on Shaw and gets past his man and manages to cross the ball over to Jota, whose header is deflected straight up in the air to De Gea.
18:42a year ago

11': United are controlling the possession but have offered very little in the final third. Wolves look dangerous going forward with Traore and Jimenez looking sharp.
18:39a year ago

8': Wolves' game plan is to catch United on the counter-attack and it's opening up gaps in their defence.

Jimenez was unlucky not to find himself one-on-one but the through ball to him was poor.

5': Chance for Wolves from the corner! The ball is whipped in and bobbles around, but Saiss blasts his shot over the bar.
18:34a year ago

4': Adama Traore shows his pace early on, taking on Luke Shaw and forcing a corner to the away side.
18:33a year ago

2': Scrappy start as Pereira fouls Jota but United have seen more of the ball so far.
18:30a year ago

What are your predictions for the game? 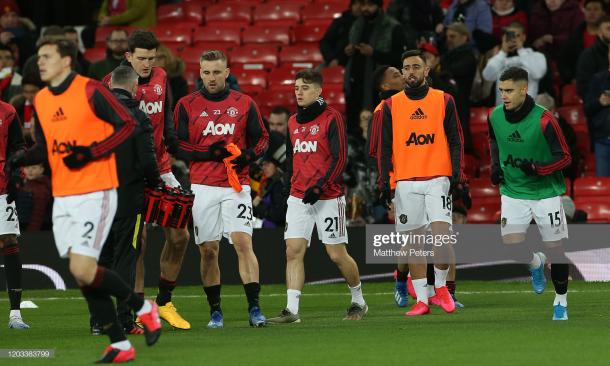 For any Sky Sports TV subscribers, you can watch the game on Sky Sports Main Event or Sky Sports Premier League.

If you want to directly stream the game, it's available to watch on Sky Go.

If you want to watch on the internet, VAVEL is your best option!

This will be the fourth meeting between the two sides this season.

Back in August, both teams played out a 1-1 draw at Molineux.

They then met in the FA Cup, drawing the initial tie 0-0 before Man Utd took the replay 1-0.

Bruno Fernandes makes his first start for United and will play up-front alongside James and Martial. 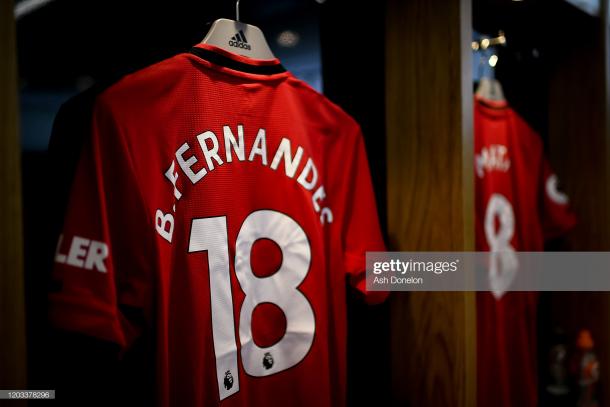 Welcome to VAVEL.com’s LIVE coverage of the 2020 Premier League match between Man Utd and Wolves.

My name is Jordan Marley and I’ll be your host for this game. We will provide you with pre-game analysis, roster updates, and news as it happens live here on VAVEL.

Wolves&#39; Daniel Podence says his injuries have been &quot;very hard&quot; a day ago

Pre-match Analysis: Wolves must find decisive touch ahead of a testing clash a day ago

"If the medical clearance came, he would probably be involved." Nuno on Raúl Jimenez return to action 9 days ago