Frank Lampard has made big headlines after dropping Kepa Arrizabalaga but the Chelsea manager will know that he cannot simply exile the Spaniard and expect no repercussions.

It has been a journalist's dream. The Blues have been linked with every goalkeeper under the sun with many people happy to claim that the keeper's Chelsea career was finished. That's quite a bold statement to make.

Lampard is a Chelsea legend but he isn't a managerial great. The only reason he is in this job is because the board were hit with a transfer ban and that forced Maurizio Sarri's project into a premature end. The 41-year-old isn't going to happily roll over and have his strings pulled. However, if Lampard really did want to sell the Arrizabalaga, he may struggle to get his way.

The former Atletico Madrid stopper is the most expensive goalkeeper in world football. After a promising first season, he has struggled for form and, consequently, Lampard has dropped him in favour of Willy Caballero. Still, these kind of situations have happened before.

When David de Gea first came to Manchester United, he was anything but a guaranteed success. For every great save there was an error of judgement and, quite often, those errors were punished.

Sir Alex Ferguson rotated him with Anders Lindegaard as the Spaniard slowly adjusted to his new surroundings. Now, he's one of the world's best in his position. That was down to patience and careful management.

It could simply be excellent management from Lampard. Caballero is a steady, if unspectacular, option between the posts. He can step in and help the team for a period of time. Arrizabalaga was coming in for criticism and, according to the Mirror, he was having difficulties in his private life.

The report claimed Arrizabalaga has struggled mentally after a split from his girlfriend. It is worth remembering that footballers are people, too, and off-the-field situations can heavily impact performances on the pitch. Media criticism and mental health problems are not a nice combination. The best remedy for anybody in the public eye would surely be to have some time away from the spotlight.

Arrizabalaga clearly has strong self-belief. His refusal to leave the pitch in the final of the Carabao Cup left his previous manager, Sarri, furious. The fact he then winked at the television cameras indicated that he was aware of his actions.

Lampard may want to take the 25-year-old down a few notches. Confidence is important but there is a fine line between confidence and arrogance.

It's difficult to argue with that feeling of superiority when you are the most expensive goalkeeper on the planet! The player is still growing as a person and his manager may want to ensure that he stays grounded. Through little fault of his own, he has achieved superstar status and that is undoubtedly overwhelming. This could be an important period of reflection for his the player; he is not bigger than the club.

Lampard isn't an idiot. He can't just write off the club's record transfer without having an internal war with his employers. If he wanted to sell him, every club will now be aware of the toxic situation, so his market value will have crashed!

Marina Granovskaia has worked miracles in terms of getting seriously good money for castaways; trying to get close to breaking even on Arrizabalaga, however, would be impossible.

Ultimately, this situation is far from black and white. If Lampard genuinely does want the player to leave, he will be entering a complicated war which would be a huge early test in his short managerial career. 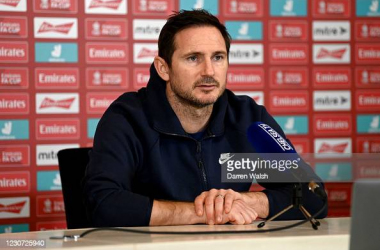 Loan Watch: What players could play a part in Frank Lampard's plans? 4 days ago

The Warmdown: A Tale of Two Blues7 days ago

The Warmdown: Do Havertz and Hudson-Odoi hold the key to solve Chelsea's attacking woes?12 days ago