In uncertain times like these, nostalgia can be an avenue for escapism; some may return to their first kiss, their favourite holiday, a particularly tasty homemade dinner...

Others would prefer to recall Chelsea's 2-0 Charity Shield victory over Manchester United two decades ago, poignant in the fact it was the final club game competed at Wembley Stadium before it closed for major construction.

Despite the Blues winning the seasons curtain raiser, it was Alex Ferguson’s Reds who went on to triumph as Premier League champions, Chelsea finishing in sixth place. The line ups for both sides were littered with household names that went off on various career tangents.

It is difficult to look past the vast frame of Petr Cech when recalling great Chelsea 'keepers, but before the Czech came shot stopper Ed de Goey.

Signed in from Feyenoord in 1997, de Goey became the most expensive 'keeper in England at that time, repaying his tag in the campaign prior to the Shield, racking up 57 appearances and 27 clean sheets.

Despite starting this fixture, he gradually lost his spot as number one to Carlo Cudicini before joining Stoke City in 2003. He briefly joined the coaching staff at Queens Park Rangers following his retirement, and now resides in his homeland as a goalkeeping coach in the Dutch fourth division.

Another native of the Netherlands, Mario Melchiot arrived from Ajax in 1999 with very little pedigree to his name.

This was swiftly forgotten, after he scored Chelsea's second against United, a low left footed shot that sealed the silverware for the Londoners.

A steady performer over the five years in the capital, Melchiot was moved on to Birmingham and Wigan where he became a firm fan favourite, retiring in the Qatar sunshine in 2011 with Um Salal. He is now a pundit on Fox Sports, occasionally cameoing on Sky Sports also.

Part of Chelsea's French fortress in defence, Frank Lebouef brought intelligence and composure across his 204 games for the Blues.

Trophies and clean sheets went hand in hand when Lebouef featured, keeping a stop out in the Shield, League Cup, the UEFA Cup Winners Cup and the UEFA Super Cup, also part of the French World Cup winning squad whilst as Stamford Bridge.

After making his way to Marseille in 2001 and joining Melchiot in Qatar, Lebouef traded football for Hollywood, performing in the Oscar Nominated Theory of Everything, portraying a Swiss doctor who informs Hawkins he will never speak again...nothing in comparison to defending against Ole Gunna Solskjaer, Teddy Sheringham and Ryan Giggs! 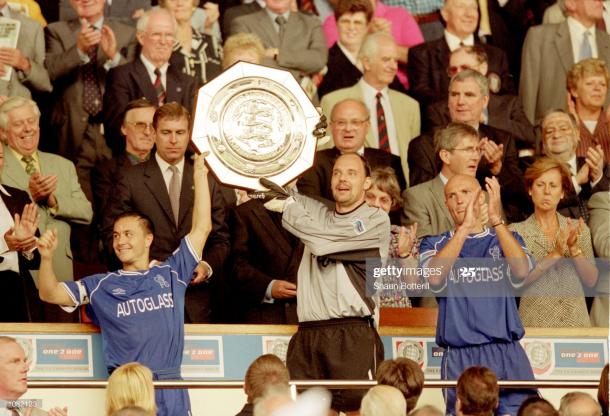 At AC Milan, Mark Desailly had established himself the elite level of European football, choosing Chelsea in the midst of a Milan collapse with great expectation upon his broad shoulders.

He did not disappoint, being a stow-wold of the defence until his contract was terminated in 2004, having been handed the captains armband for two years and leading Chelsea to a runner up spot in the league.

He like many others hung up his boots in Western Asia, returning to England as a pundit for the BBC, later switching allegiances to ITV, part of their coverage team for the 2010 World Cup in South Africa

Celestine Babayaro bathes in Blues history, becoming the clubs first African player and the most expensive teenager at the time, remaining at the Bridge for eight, elated, acrobatic years.

The left-back loved to summersault as his celebration; unfortunately, this was kept to minimum as he only scored on five occasions for Chelsea, winning a higher number of trophies (six) before moving up north to join Newcastle United.

Across the pond, he had more of a fall than a flip with LA Galaxy, now following his sons progress as he plays in the Toon Army’s barracks.

Arguably the least memorable of his star-studded peers, Mario Stanic was signed simultaneously as strikers Jimmy Floyd Hasselbaink and Eidur Gudjohnsen, another excuse in forgetting his fame.

Yet, he was a hero in his native SFR Yugoslavia for being the future of their football, impressing in Portugal, Holland and Italy before his stint in England.

The Shield was his only silverware on Stamford Bridge, remembered best for his Goal of the Season candidate against city rivals West Ham that same season. His career ended in London thanks to injury, but he will never be forgotten by the Chelsea faithful for THAT goal.

One man who is hard to forgot was the Italian maestro Roberto di Mateo. A sucker for a final, the midfielder score consecutively in three, all coming in Chelsea victories, only the second player to do so for the Blues.

Following a joyous relationship with the Londoners, he was sadly forced to retire at the age of 31 having suffered a triple leg fracture just a month after the Shield.

Although, die Mateo would return to Chelsea, this time as interim manager following the departure of Andre Villas-Boas. 'Robbie' first claimed the FA Cup in 2012, before cementing himself into Chelsea legend by masterminding the Champions League win over Bayern Munich in their own backyard. 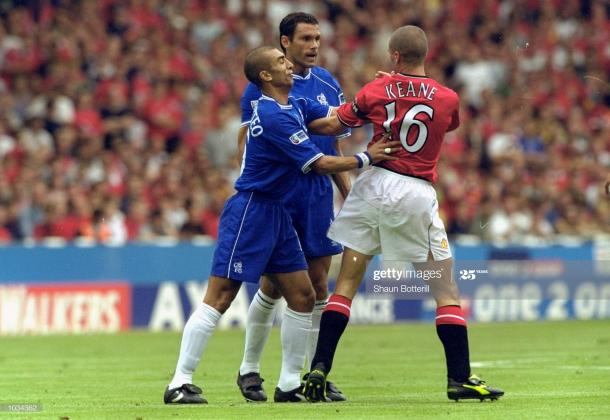 Wiser than most on the field, Dennis Wise went on to become the fifth highest appearance maker in Chelsea's history, as well as their second most successful captain.

As you'd expect for a man signed from Wimbledon, Wise was a no-nonsense midfielder; a rock amongst a team of foreign gems, the Englishman in this starting line-up.

Leaving for Leicester City in 2001, he went on to player-manage Millwall for three years, guiding them to their first ever FA Cup final. Other permeant managerial roles included Swindon Town and Leeds United, yet nothing compared to his experience in the Australian Jungle as a contestant on I'm A Celebrity Get Me Out of Here!

Providing the South American flair was Gus Poyet, the Uruguayan becoming the Blues first signing from the continent, made more impressive he was signed on a free.

In that same season of the Shield win, Poyet went on to be the top scorer in the FA Cup as Chelsea won twice at the Old Wembley; his goal return of 49 in 145 is a statistic current Chelsea boss Frank Lampard would admire.

To the distaste to the Bridge faithful, he moved across town to Tottenham Hotspurs, helping them to a League Cup final in his first year. Poyet like many moved to management, guiding Brighton & Hove Albion to a Championship semi-final Playoff, saved from Sunderland from relegation, alongside stints in Greece, Spain, France and China.

Italian stallion only seems inappropriate because of Gianfranco Zola’s stature, yet his grace and gorgeous footwork- but also his power- more than made up for the 1996/97 FWA Footballer of the Year.

Easily one of the Premier League greats, Zola transformed the makeup of a Chelsea side that had been struggling to break up the big boys, earning the clubs Player of the Season on two occasions and finished as the team’s top scorer in 2002/03 at the ripe old age of 36.

Retiring back in Italy with Caligari, the former forward could not resist a return to London, taking over at West Ham and Watford (who finished third in the Championship) before coming full circle as an assistant to Maurizio Sarri at Chelsea, part of the Europa League winning staff. 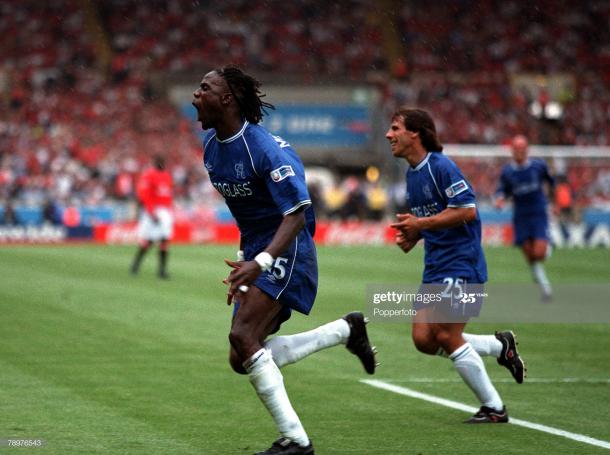 Last but certainly not least, Hasselbaink bagged the opener against United having only just arrived that summer from Athletico Madrid, certainly not his last in a Chelsea strip, scoring another 68 goals in four years.

That season in fact he ended with 26 and the Premier League Golden Boot, repeating the exact tally in the following term, one shy of eventual winner Thierry Henry. Middlesbrough also made the most of his scoring services (22 in 58), less so at Charlton Athletic and Cardiff City before Hasselbaink hung up his red-hot boots.

Unlike his peers, he has never managed a top end club, starting out with Royal Antwerp in his native Holland, bringing joy to Burton Albion after sending the Brewers into League One for the first time, alongside brief spells at QPR and Northampton Town.

From Chelsea’s 2012 Champions League semi-final hero to frozen out under Guus Hiddink. What happened to Ramires? 3 months ago

Tuchel has brought stability to the Bridge, but the real test starts now&nbsp; 4 months ago

Chelsea v Newcastle United Preview: How to watch, kick-off time, team news, predicted lineups and ones to watch 4 months ago

The Warm Down: Unconvincing Chelsea edge past Barnsley to reach the FA Cup quarter-finals 4 months ago