Thank you for following along

Thank you for joining us tonight. You can find more great articles and stories right here at Vavel.com where you can also follow coverage of Aston Villa vs Manchester United.
19:5725 days ago

Southampton we're by far the better team in the first half and should've been at least 3-0 up. But a penalty miss means Everton we're able to grab an equalizer just before half-time.
19:5525 days ago

Anuneventful second half here which sees the points shared by both teams, all but ending both teams slim chances of European football.

Looking like a draw here at Goodison Park
19:5125 days ago

Southampton piling on the pressure here

Southampton firing balls into the box but so far nothing is pulling off for the saints
19:4925 days ago

Armstrong off for Will Smallbone
19:4825 days ago

Long held the ball up well but his layoff for Armstrong who's shot his skied over the bar
19:4725 days ago

Redmond cut inside but the ball sprayed wide
19:4425 days ago

Danny Ings found some space for himself but well blocked by Everton
19:4125 days ago

Neither team really looking like scoring at the moment
19:3525 days ago

Anthony Gordon off for Bernard
19:3225 days ago

Moise Kean involved from the off here as he drives forward but conceded a free-kick
19:3125 days ago

Che Adams and Oriol Romeu off for Shane Long and Hoijberg
19:3025 days ago

Everton much better this half and the 3-5-2 seems to have solved the midfield issue of the first half. Southampton haven't really got going
19:2925 days ago

And that was Calvert-lewin's last involvement of the game as he is replaced by Moise Kean. Game also stopped for a water break.
19:2925 days ago

Everton broke but Gordon's final ball to Digne didn't have the strength, but Everton win the corner
19:2325 days ago

VAR checking for a potential red card offence, but the check is over and remains a yellow for Bednarek
19:2225 days ago

Bednarek fouls Richarlison who was in on goal, escapes with a yellow card. Dangerous position for this free-kick.
19:1725 days ago

A great ball from Davies find Calvert-Lewin who can't get a strike away
19:1725 days ago

A change of formation

Everton looked to have gone to a 3-5-2 with Coleman slotting in as an extra centre-half. Anthony Gordan also looks to be playing much more central with Sidibe and Digne running the channels
19:1425 days ago

A good old fashioned goal-mouth scramble there. Ward-prowse then tries one from distance which goes out for another corner
19:0925 days ago

Ward-prowse can't get it over the wall and it goes out for a corner
19:0925 days ago

Keane brings down Armstrong in a dangerous position here. Ward-Prowse and Bertrand will fancy this. Redmondand Armstrong also over it.
19:0725 days ago

And Southampton almost in with an immediate goal as Che Adams curls one, but its  comfortable save for Jordan Pickford
19:0625 days ago

The teams are back out here!

Can Everton improve on their first half performance or will Southampton continue their dominance?
19:0525 days ago

A man in form

Here's that finish from Richarlison

🔥 | The finish from @richarlison97 was emphatic, but let's talk about that assist from @LucasDigne... 💫 #EVESOU pic.twitter.com/cMBgqv0eTp

Everton will welcome the half-time whistle there. Second best all half but find themselves equal with Southampton here.

Southampton will consider themselves unlucky after Ward-Prowse's penalty miss. Danny Ings keeps himself in the golden boot race bagging his 19th league goal of the season.

Yerry Mina now down after colliding with Nathan Redmond. Looks like Redmond may have stuck an elbow out there.
18:4925 days ago

Jan Bednarek is down here following a collision
18:4725 days ago

Richarlison and Calvert-Lewin both booked here. 4 minutes of added time to be played here at the end of the first half
18:4425 days ago

Out of nowhere Digne finds Richarlison who finishes brilliantly. Entirely against the run of play but Everton won't care! 1-1
18:4325 days ago

Ward-prowse whips a ball in which finds Adams who cant get a good enough connection on the ball
18:4225 days ago

Gylfi Sigurdsson on for Andre Gomes who has picked up a knock
18:4125 days ago

Gordson found Mina but the defender strayed offside
18:4025 days ago

Richarlison fouled, free-kick to Everton in Southampton half
18:3625 days ago

Stephens booked for foul on Richarlison
18:3425 days ago

Southampton piling on the pressure here, ball found its way into the box but Mina cleans up. Everton then broke and Gordon is barged over by Walker-peters in the box but referee says no foul.
18:3325 days ago

Digne shot across goal, straight into the palms of Mccarthy
18:3225 days ago

Southampton broke forward as Armstrong found Ings who bundled it into the goal. Ings gets his 20th goal of the season.
18:2925 days ago

Ward-prowse strikes it over the bar, clipping the woodwork along the way. A real let-off for Everton.
18:2825 days ago

Corner found Danny Ings who header is tipped onto woodwork, but the ball came back in and Gomes fouldedWard-prowse
18:2725 days ago

Ward-Prowse strikes it from difference and needed a touch from Pickford. Goes out for a corner
18:2625 days ago

We're back underway following that drinks break, Southampton restart on the front foot and win a free-kick in the Everton half
18:2425 days ago

Everton probably need this break, easily been second best and Southampton will consider themselves unlucky not to be ahead.
18:2325 days ago

Corner finds Mina who's header is easily collected by Mccarthy
18:2325 days ago

Iwobi had a clear cut chance but his half-volley is straight at Mccarthy, corner to Everton
18:2225 days ago

Ward-prowsefouls Gordon who wins Everton another free-kick
18:1725 days ago

Everton survive a couple of attacks from Southampton, Danny Ings causing the Everton defence a lot of problems here
18:1525 days ago

Armstrong booked for taking out Richarlison, free-kick to Everton just outside the penalty area
18:1325 days ago

Great ball from Ward-prowse which nearly found Walker-peters, but the ball runs out for a goal-kick
18:1225 days ago

Gordon tries to find Calvert-lewin but the ball just to hard for the striker
18:1025 days ago

Calvert-lewin held by Bertrand and wins the free-kick
18:1025 days ago

Gordon barged off the ball in the Southampton area but Ref thinks nothing of it
18:0825 days ago

Southampton have the ball in the net through an Armstrong tap-in but is ruled out for offside, VAR had a look but the decision stands
18:0825 days ago

Good link up play between Ings and Adams but Digne defends well and Pickford cleans up
18:0725 days ago

Walker-peters fouled in his own half, free-kick to Southampton
18:0625 days ago

Bertrand's ball in is cleared for a corner to Southampton
18:0525 days ago

Iwobi brings down Redmond and Southampton have a free-kick in a dangerous area
18:0425 days ago

Ball cleared and ends up back to Jordan Pickford
18:0225 days ago

Gordon whipped in the ball which Stephens cleared for a corner
18:0225 days ago

We're underway here! Everton in blue, Southampton in black and gold
17:5925 days ago

A look back - previous meetings

A bizarre double helping of own goals gave #SaintsFC the points against #EFC back in 2️⃣0️⃣1️⃣4️⃣! 😄 pic.twitter.com/59FJsNCV84

Anthony Gordon on being back in the side tonight

🗣 | "I think with every game I play, I get more experience. As a young player, it's benefitting me massively."

Southampton unchanged after their shock win against Manchester City.

Nice of you to join us!

Good evening and welcome to our live coverage of Everton vs Southampton (kick-off 18:00BST)

Our live reporter Andrew McDonnell is at Goodison Park tonight to bring us all the latest news and build-up to tonight's game. 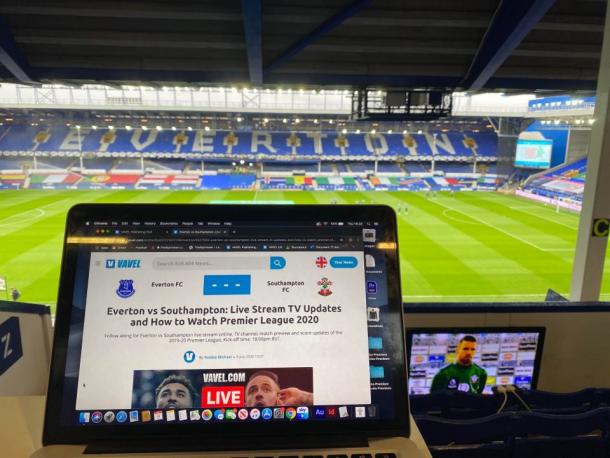 The game will be free-to-view via Amazon Prime tomorrow night.

But you can get all the updates right here on Vavel.com

“This is definitely one of the best parts of being in the Premier League – you have a big challenge every week,” he said. “They are both super successful managers who have won everything in their career.

“It’s always interesting and amazing to battle with them and it makes yourself better as a manager.

“Every day is enjoyable and you see you have a fantastic job. This week is not different, so again I am looking forward to this game – hopefully with a good result again.”

Winger Moussa Djenepo will miss the trip to Goodison park after suffering a calf injury in training.

Ralph Hasenhüttl did mention that Pierre-Emile Højbjerg could play a part in the game.

“Jannik [Vestergaard] will not make it with his quad injury, Sofiane [Boufal] is also still out and Yan Valery has a muscle injury still.

“Pierre [Højbjerg] is an option and could possibly make the bench.”

Everton boss Carlo Ancelotti has revealed that defender Mason Holgate will miss the game with Southampton after picking up a knock in the last game against Spurs.

But Everton are boosted by the news that Theo Walcott is available for selection against his former club. Walcott had been out since the restart following abdominal surgery but could feature tomorrow night.

Fabian Delph still remains out with a muscle injury.

Everton will be looking to bounce back from their disappointing 1-0 defeat to Spurs on Monday night.

Southampton on the other hand are in good form and will look to build on their shock victory against Man City which saw Che Adams score his first goal for the club with a peach of a goal from 40-odd yards out.

Everton vs Southampton will be played at Goodison Park.

Ancelotti aiming for "evolution" at Everton this summer8 days ago

Carlo Ancelotti: This is just the start for Jarrad Branthwaite13 days ago

Sheffield United vs Everton (0-1): As it Happened14 days ago

Key defenders to miss rest of season14 days ago

Jarrad Branthwaite: "Everyone has been brilliant with me"17 days ago
Restore your password
Please enter your user name or email.
Login Member or Writer Panel
Enjoy your own Customized Newspaperwith VAVEL topics' carousels!