Liverpool have continued their positive momentum since the restart. They have won three matches while drawing against local rivals Everton. The only blemish on the notepad was a 4-0 drubbing at the hands of Manchester City. Their recent 3-1 win against Brighton and Hove Albion was a much more convincing performance from Jurgen Klopp's men.

Burnley have well and truly bounced back from their own nightmare at the Etihad. They're unbeaten in four and have three clean sheets. A recent 1-0 victory over struggling West Ham United put to bed some slight frustrations from letting the lead against Sheffield United slip away.

In the reverse fixture, the Champions steamrolled the Clarets 3-0 with Sadio Mane and Roberto Firmino adding to an own-goal from Chris Wood.

Burnley remain in contention for a European spot but face competition from the likes of Sheffield United, Tottenham Hostpur and Arsenal. Liverpool's motivation is to break points records and for some of their superstar individuals pick up some additional awards of their own. Eyes will be on the Golden Boot and the Golden Glove, making for some intriguing battles on the field.

A more personal rivalry than anything else, the two keepers are neck-and-neck in the battle for the Golden Glove. Pope has 14 clean sheets to his name with Alisson one behind on 13. The Brazilian stopper has missed nine matches due to injury or suspension so it is impressive to think that he could still finish the season with more clean sheets than anybody else. Pope, though, will be desperate to retain his place at the top of the tree.

The Liverpool winger is chasing the Golden Boot and he will be wanting to boost his chances in this match. Salah was excellent in the win against Brighton and Hove Albion, taking up very central positions on the pitch. Long, back in the fold after the injury to Ben Mee, will have to be alert to cut-out any inside runs from the Egyptians.

The big-money buy from RB Leipzig has been putting together some steady performances since the restart. Keita is a workmanlike midfielder with little bursts of quality that could help sparkle a bit of magic in the middle of the park. Lisewise, Brownhill is a player who is not afraid to pick a pass or make a surging run. He is a much more dynamic midfielder than the deep-sitting Jack Cork.

Liverpool are without Jordan Henderson for the rest of the season after. Joel Matip is out and Dejan Lovren remains a doubt but there are no more injury concerns for the Merseyside outfit. Still, one would expect a few changes from the match against Brighton. Klopp may want to offer a second opportunity to young Neco Williams.

The youngster started at left-back in the midweek game at the Amex but was withdrawn at half-time as he had a caution. He may get an opportunity at right-back with Trent Alexander-Arnold due a rest.

Burnley have a depleted squad but they are managing to grind out some good results. The collective attitude of the squad is currently doing the business.

Ben Mee, Jack Cork, Matt Lowton and Ashley Barnes will all be absent. Johann Berg Gudmundsson, Robbie Brady and Chris Wood are all fit but may have to wait their turn as a result of the team's winning mentality.

What the managers said

Jurgen Klopp on the challenge of Burnley (taken from LiverpoolFC.com)

"We face a team with a brilliant attitude. What Sean Dyche is doing there is absolutely exceptional.

"I know they have some injuries, which is always difficult, especially in a period where you play every three days. On top of that, I’m not 100 per cent aware of it, but I think I heard of some contract issues when players are not available anymore.

"They have a pretty small squad together and [are] playing every three days so I have so much respect for the results they got. It’s really, really good."

“Most teams do have a bad spell in this league, so to be on the edge of things in terms of talking about Europe is good for the group and myself.”

“But we are a constant work in progress here and there are no bold statements of delusions of grandeur.

“You can lose focus at times on what you are trying to achieve, even as managers.

“You work so hard to get points on the board and if we had a full squad, I think it would be a more simplistic challenge, but unfortunately we have been limited.

“Within that, it’s not to forget the points we have got and hopefully we will add more.” 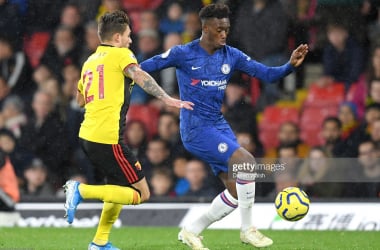 Watford vs Chelsea preview: How to watch, kick off time, team news, predicted lineups and ones to watch an hour ago

Joachim Andersen: How will his injury affect Crystal Palace over the busy schedule? 30 minutes ago

Ralf Rangnick gives a definition to Manchester United 20 hours ago

The Warmdown: A Diogo double culminates a dominant 4-0 win for Liverpool against Southampton 2 days ago
//