That’s all from us!

So Chelsea back to winning ways and will now turn their attention to the Fa Cup, where a semi-final match against Manchester United awaits them on Sunday.

Their next league game is against champions Liverpool where they will have to play a lot better than they did tonight If they are to take the three points.

Thanks for joining us tonight, be sure to check out some articles on our website, VAVEL.com where we will also have the match report from this match published very shortly.
22:13a year ago

A largely dull affair but it’s enough for Chelsea to extend their lead over their top four rivals to 4 points.

Olivier Giroud’s third goal in three starts was the  difference as Chelsea edge past Norwich.

At this stage in the season it’s all about winning and Chelsea are back to winning ways.

As for Norwich well this defeat confirms this season will be their worst points tally in their history and further cements them to the bottom of the premier league table.

Reece James has looked lively since he came on and he’s just put in a delightful ball but nobody was there to tap it in.

Willian sees a decent effort at goal well saved by Krul from the resulting free kick.

Chelsea know they need a second.

On comes Tammy Abraham to try and do that.

Leicester and Manchester United fans will be hoping those three substitutions can spark Norwich into life.

Chelsea fans, on the other hand, will certainly be nervous going into these last 10 minutes. Their team haven’t done enough to be guaranteed of three points and may not be feeling very comfortable.

Reece James and Calum Hudson-Odoi replace Azpilicueta and Pulisic.
21:55a year ago

Idah, Pukki and Stiepermann come on for the final 13 minutes to give Norwich more of an attacking look about them and they replace Tettey, Drmic and Hernandez.

A high, flat cross from Azpilicueta is met by a solid header from Alonso and Krul once again saves.
21:51a year ago

Giroud’s delightful chip into the path of Pulisic deserved better but Pulisic’s low shot is well saved by Tim Krul.
21:49a year ago

Miss from Giroud again! That man could have had 5 tonight.

The ball is whipped in by Azpilicueta straight onto Giroud’s head but the Frenchman’s header is tame and floats over the bar.

You would have backed him there.

Buendia is the only Norwich player to have scored since the restart of the season.

Ross Barkley goes sprinting onto the pitch, only to have to come straight back off for the second drinks break of the game.

The kind of moment that would get a few laughs at Stamford Bridge if there were any fans in the stadium.

Ross Barkley replaces Ruben Loftus-Cheek for Chelsea.
21:42a year ago

Azpilicueta curls one goalwards from outside the area on his weaker left foot and the shot had Krul worried for a moment.
21:36a year ago

Those two yellow cards have come in the space of two minutes and are the first of the game.
21:35a year ago

Kurt Zouma goes diving in on Max Aarons and is nowhere near the ball. Deservedly gets a booking.
21:34a year ago

Nasty one from Todd Cantwell on Ruben Loftus-Cheek and the young Englishman gets booked for his trouble.
21:32a year ago

Chelsea needing to be wary

A couple of rare forays forward from Norwich signifying the need for Chelsea to get a second.

Norwich looking dangerous on the counter at times.

From the resulting corner, Olivier Giroud gets up high but heads wide.

He could easily have a hat-trick by now.

Willian picks the ball off Alex Tettey and bares down on the penalty area before unleashing a shot blocked which is blocked behind for a corner.
21:27a year ago

So with this 1-0 scoreline, Chelsea are in third place 4 points ahead of Leicester and Manchester United in the race for Champions League football.

That’s certainly more than they could’ve hoped for after their 3-0 defeat against Sheffield United last Saturday.

Still a long way to go however...

Early corner for Chelsea as they look to make this match more comfortable for themselves. Rudiger wriggles free but heads well over.
21:20a year ago

The players are out and we’re back underway.
21:13a year ago

Giroud now has 31 headed goals in the Premier League, making up over a third of his total goals.

His shooting has been off tonight and on another day he could have had a hat-trick, but his heading ability has saved him once again.

That goal couldn’t have come at a better time. Just as Frank Lampard was surely planning changes at the break, Chelsea have their break through and head into half time 1-0 up.
21:05a year ago

Finally the Frenchman has his goal and it’s come right on the stroke of half-time!

Christian Pulisic whips the ball in from the left and Giroud did what he does best, heading the ball past Krul in the Norwich net.

Norwich have only scored once since the Premier League restart, despite having played 6 league games.

Daniel Farke said before the restart they needed to win 5 of their last 9 games to stay up but it really hasn’t happened for them in front of goal.

The ball falls to Giroud again 6 yards out but he scuffs it and Krul easily collects
20:55a year ago

An Alonso shot is deflected behind for a corner but Norwich clear it away easily.
20:54a year ago

From the resulting corner Kurt Zouma goes close with a header, which just drifts wide.
20:52a year ago

Christian Pulisic brings the ball down brilliantly in the box and unleashes a shot goalwards, but Tim Krul tips it onto the crossbar and out for a corner.
20:51a year ago

A delivery from Willian is flicked on at the near post by Cesar Azpilicueta, but Ruben Loftus-Cheek can’t do anything other than keep it in play.
20:50a year ago

Clever backheel from Giroud in the box almost falls to Willian 6 yards out but the Norwich defence get there first.
20:48a year ago

Tim Klose is down following a collision with Christian Pulisic but it looks like he should be able to continue.
20:46a year ago

Another chance goes begging from Olivier Giroud, who hasn’t found his shooting boots as of yet. Sliced it horribly wide from the right-hand side of the area.
20:43a year ago

Christian Pulisic hits the side netting with a ferocious shot from inside the area after a low cross from Marcos Alonso.
20:41a year ago

The first half drinks break is underway, a chance to reflect what has been a pretty uneventful first quarter of the match. Frank Lampard will be hoping he can spark some life into his team.
20:37a year ago

Olivier Giroud finds himself through on goal after out-muscling two Norwich defenders, but he fires a shot straight at Tim Krul
20:33a year ago

A decent spell of possession for Norwich City ends with Chelsea winning the ball back and countering, only for Marcos Alonso to slice a shot well wide.
20:29a year ago 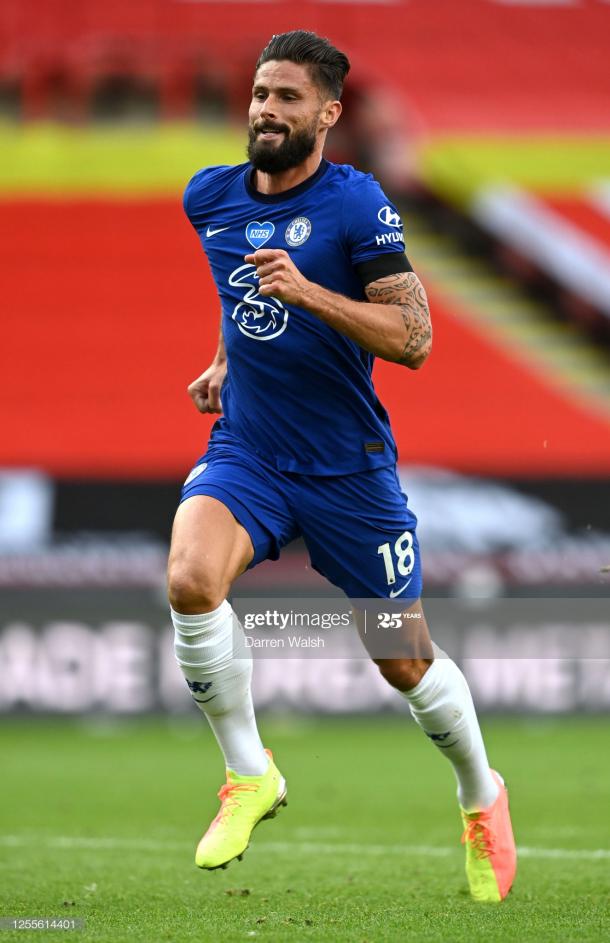 Both teams have started the game brightly, Norwich are making it clear that they’re not just here to defend. The players will be desperate to impress their manager after some less than impressive performances of late that has seen the team drop out of the division.
20:22a year ago

A blocked Loftus-Cheek cross is deflected behind for a  but Norwich clear the resulting corner easily.
20:20a year ago

Ruben Loftus Cheek’s stooped header hits the side netting after a good cross from the right.
20:15a year ago

And we’re underway at Stamford Bridge! Chelsea know they have to beat already relegated Norwich otherwise their top four hopes will be hanging massively in the balance.
20:13a year ago

The teams walk out

The Frenchman has scored 5 goals in his last 9 premier league appearances and replaces Tammy Abraham in the starting eleven tonight.

Cantwell returns to the starting eleven after a couple of games out through injury. With Teemu Pukki on the bench, Norwich will look to the youngster for inspiration. The Englishman has 6 goals this season.

So, Frank Lampard makes five changes to his side following their 3-0 defeat at Sheffield United last time out, with Olivier Giroud replacing Tammy Abraham up front.

As for Norwich well they four changes to the side that was condemned to relegation after the 4-0 defeat to West Ham, Todd Cantwell a notable returned to the starting 11.

This is your 1 hour warning! Kick-off is just an hour away now, so let’s take a look at the teams.
18:31a year ago

The last time these two teams met was in August at Carrow Road with both teams still excited about what the new season would bring for them.

There were four goals in the first half hour during that match, with the game eventually finishing 3-2 to Chelsea after two goals from Tammy Abraham and a man-of-the-match performance from Mason Mount.

Hopefully tonight’s game will produce that same level of excitement.

Chelsea look to bounce back from a disappointing 3-0 defeat to Sheffield United in their last game.

That defeat makes this game a must win for Chelsea as the race to finish in the top four heats up.

The pressure will be on them to produce a reaction tonight, especially as they have the opportunity to pull away from rivals Leicester City and Manchester United after they have both dropped points in the last couple of games.

As for Norwich, they will be playing for pride after a 4-0 loss to West Ham United confirmed their relegation from the Premier League with three games still left to play.

Manager Daniel Farke will see the next three games as an opportunity to prepare for next season’s fight in the Championship, while the players will be desperate to impress their manager.

Todd Cantwell could start after returning from injury as a substitute against West Ham.

Chelsea are still without midfielder N’Golo Kanté, but he could be fit in time for their Fa Cup semi-final against Manchester United on Sunday.

Billy Gilmour is going to miss the rest of the season after undergoing an operation on his knee following an injury sustained against Crystal Palace.

Andreas Christensen is fully fit again after coming off at half-time in Chelsea’s last match against Sheffield United.

Chelsea vs Norwich is to be played at Stamford Bridge.

The game is scheduled to kick-off at 20:15pm BT and is live on Sky Sports Main Event.

From Chelsea’s 2012 Champions League semi-final hero to frozen out under Guus Hiddink. What happened to Ramires? 3 months ago

Tuchel has brought stability to the Bridge, but the real test starts now&nbsp; 4 months ago

Chelsea v Newcastle United Preview: How to watch, kick-off time, team news, predicted lineups and ones to watch 4 months ago

The Warm Down: Unconvincing Chelsea edge past Barnsley to reach the FA Cup quarter-finals 4 months ago