Everton get the win here thanks to Richarlison's winner early in the second half. Sheffield United's hopes of European football now hanging in the balance due to this defeat.
19:512 years ago

Digne blocked the ball with his face from point blank range, back up now.
19:492 years ago

Four minutes of added time to be played
19:482 years ago

Richarlison booked for holding the ball up
19:462 years ago

Sigurdsson off for Seamus Coleman
19:442 years ago

Fleck's cross was just behind Baldock who's header was glanced wide
19:422 years ago

Theo Walcott off for Anthony Gordon
19:412 years ago

Andre Gomes strike from distance went wide of the post
19:392 years ago

Lovely play by Everton, Walcott's cross was asking too much of Richarlison however.
19:362 years ago

Calvert-Lewin booked for a raised arm on Enda Stevens
19:352 years ago

Baldock dispossessed by Davies
19:342 years ago

Can Everton hold onto their lead?
19:292 years ago

Pickford impeded as he came to collect the ball
19:292 years ago

Digne headed away the cross
19:272 years ago

Norwood off for former Everton player John Lundstram
19:262 years ago

A chance for both sides to catch their breath
19:192 years ago

Sharp and Fleck on for Mcburnie and Osborn
19:182 years ago

Basham's cross came in to Mcburnie but Keane defended well
19:172 years ago

Calvert-Lewin was through but his shot was deflected and parried away by Henderson
19:132 years ago

Cross came in from Basham, Keane got the ball tangled in his feet but thankfully for him Pickford was alert to collect.
19:122 years ago

McGoldrick's shot once again charged down this time by Michael Keane
19:082 years ago

Everton gave the ball away but McGoldrick's shot was charged down
19:072 years ago

Everton broke and Walcott's cross was cut out by Basham. A lively start to the second half here.
19:052 years ago

Sigurdsson whipped in the free-kick and Richarlison came in with a great glancing header. 1-0 Everton
19:042 years ago

The teams are back out here

Can either side break the deadlock in the second half?
19:022 years ago

A drab game so far. Both team had minimal chances, Calvert-Lewin came closest when his header hit the post.
18:472 years ago

Norwood booked for foul on Richarlison. Free-kick in a dangerous position here.
18:462 years ago

Osborne had  chance at goal but was deflected into Pickford's hands
18:442 years ago

Calvert-Lewin denied by the post, closest either side have come so far
18:432 years ago

Basham's cross nearly crept in but Pickford palmed it away
18:382 years ago

Another corner for Sheff Utd

ball came out to Enda Stevens, but his shot was skied.
18:352 years ago

fourth corner of the game for Sheff Utd

Calvert-Lewin jumped highest to head away the corner
18:312 years ago

Suspicion of handball in the build-up there, bit the ball goes out for a corner
18:262 years ago

will the rest burst some life into this game?
18:252 years ago

Great play from Andre Gomes who put the cross in but Calvert-Lewin could not control the cross.
18:212 years ago

Good play from Everton as Richarlison played in Walcott who shot dragged across goal, first real sight on goal for Everton.
18:202 years ago

Corner whipped in but McConnell couldn't get a touch and goes out for a goal-kick to Everton.
18:152 years ago

Pickford pushes the ball out for another Sheffield United corner
18:142 years ago

Digne gives away a free-kick in a dangerous position here
18:142 years ago

Original corner cleared but the ball back in was easily claimed by Jordan pickford
18:132 years ago

Nothing to shout about for either team so far
18:052 years ago

Lucas Digne goes down after a nasty challenge from Oliver McBurnie, Everton however give away possession but Pickford retains it.
18:022 years ago

Tom Davies fouled in his own half, Everton resume play.
18:002 years ago

And we're off. Sheffield United in their red and white stripes, Everton in blue. Both teams take the knee to support Black lives matter.
17:582 years ago

Reminder of the line-ups

The teams are out here at Bramall Lane. Who will be victorious?
17:542 years ago

The last meeting at Bramall Lane

Mikel Arteta scored a penalty the last time the sides met at Bramall Lane in 2007. He cancelled out Rob Hulse's goal in a dull affair in a season which saw Sheffield United relegated from the Premier League.

The man in the middle

Stuart Attwell has dished out 118 yellows and five reds this season. His last game was a busy one when he gave out 3 yellow cards and a red in Bournemouth's 4-1 victory over Leicester City.

Not a happy hunting ground for Everton

Can the Blades keep their European dream alive?

A win for Chris Wilder's men will lift them into 7th which could be enough to secure them a space in the Europa League next season, depending on who wins the FA Cup.
17:332 years ago

The home team begin their warm-up

A first start for Branthwaite

Everton have won 53 games compared to their opponents 48 in all competitions. They first met all the way back in 1893 which resulted in a 3-2 victory for the Blades.
17:162 years ago

The last time that the two sides met, the Blades were 2-0 victors at Goodison Park
17:122 years ago

No changes for Chris Wilder's side 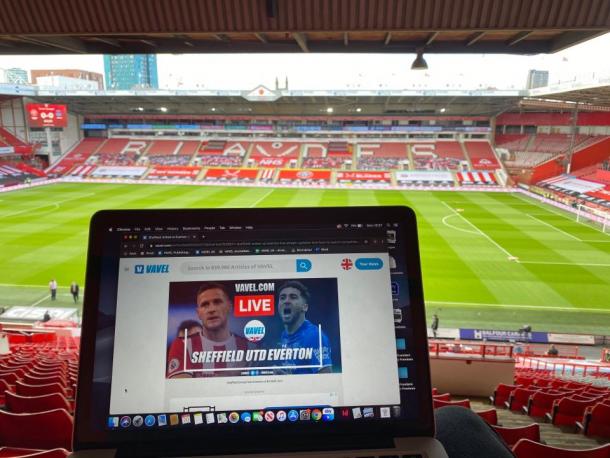 Our reporter Andrew McDonnell is at Bramall Lane for us for this evening's game. We will bringing you all the build-up right here at Vavel.com
23:542 years ago

Join us from 5pm for all the pre-match build up to tomorrow night's game between Sheffield United and Everton.
23:532 years ago

“A lot of things that can happen for that – injuries, managers trying different things and people should realise the position they were in when he took over.

“They were involved in a relegation scrap so to get in the position as early as they have done is testament to the affect he’s had on his players.

Ancelotti: We want to show our best qualities

“We are going to play a team doing really well in this period, they beat Tottenham, Chelsea and Wolves at home,” said Ancelotti.

“They play with intensity and are really aggressive.

“We want to show our best qualities.

“[We want] fighting spirit and to improve our attacking play, which in the past period wasn’t so good.

Tomorrow's game will be shown live on Amazon Prime and is also available to non-prime customers.

You can also see live updates right here on Vavel.com

Carlo Ancelotti confirmed earlier in the week that trio Mason Holgate, Yerry Mina and Fabian Delph will miss the rest of the season with injury.

This means Everton may turn to 18-year-old Jarrad Branthwaite to partner Michael Keane in what would be his first Premier League Start.

Midfielder John Fleck could be in line to make his first start since returning from injury.

Everton's European hopes ended a few weeks back and are now looking to finish the season on a high. But Carlo Ancelotti will be looking to see which players could still play their way into his plans for next season.

Have the Blades blown their European dream?

Where do Everton go from here after losing their must-not-lose game? 3 months ago

"I don't like the up and down nature of our performances": Key quotes from Frank Lampard's post-Tottenham press conference 4 months ago