Goals from Josh Onomah and Neeskens Kebano sealed an impressive win, which puts the visitors firmly in the driving seat for a place at Wembley Stadium in the play-off final against either Swansea City or Brentford on August 4th.

The first chance of the game fell the way of Fulham inside the opening ten minutes, Joe Bryan arrived on the edge of the area and met a neat corner, but his powerful effort struck the head of an attacker who was in an offside position.

Cardiff's first chance came three minutes later when Leandro Bacuna fired a lovely stinging drive which was kept out by Marek Rodak, however, Michael Hector, had  to get there first otherwise Robert Glatzel was about to pounce and open the scoring.

The hosts kept on the pressure when Lee Tomlin curled a sublime ball to Junior Hoilett, who played it through to Glaztel who managed to force Rodak into another smart save.

The game quietened down a little until the 31st minute when Glaztel collected a smart pass from Marlon Pack, the forward cut inside and fired an effort towards goal but Rodak made yet another brilliant save.

Fulham's next chance came 11 minutes before the break when Bryan hit a swerving effort towards goal after a good pass from Tom Cairney, however, Cardiff defender, Sean Morrison made a important block to keep the scores level.

It was the visitors from London who ended the half stronger, Kebano found Onomah at the far post, only for Smithies to come off his line to make an important stop.

Fulham then won a free-kick when Cyrus Christie went down under the challenge of Hoilett on the right flank, Hoilett was booked for the challenge, Anthony Knockaert fired the set-piece over the bar.

The final chance of the half came when Christie found Cairney who was around 20 yards out, however, he couldn't direct his effort on target as it flew wide of the target.

The first chance of the second half produced the opening goal of the game, a short pass from Harrison Reed found Onomah, who managed to hold of Pack and get beyond two challenges, before firing past Alex Smithies at his near post to give the visitors the lead.

Fulham had another chance three minutes later, however, a free-kick was poor and easily claimed by Smithies.

Knockaert went close from around 30 yards, however, a slight deflection made it a comfortable save from Smithies.

Onomah then knocked the ball into the path of Bobby Decordova-Reid whose effort was always rising and heading over the bar.

Fulham continued to have chances in the second half and following two consecutive corners, Morrison managed to clear the danger after Reed's delivery.

Fulham went close from around 30 yards with a free-kick, however, Kebano could only fired wide of the target as the visitors looked for a second goal.

Cardiff's first chance of the second period came when Will Vaulks found Tomlin with a trade-mark long throw, however, Rodak made yet another brilliant save to deny the Cardiff forward.

Decordova-Reid then won a free-kick for the visitors, Reed found Knockaert whose effort was straight down the throat of Smithies.

The term taking one for the team came into action with 77 minutes on the clock, Kebano managed to get away from Bacuna who pulled him back and collected a yellow card.

Another chance arrived for Cardiff to try and get into the game, Vaulks launched another long throw, Hector managed to head clear only as far as Morrison, whose effort was saved comfortably by Rodak.

As we entered stoppage time, Fulham won a free-kick around one or two yards out, when Morrison blocked Cairney's path, Kebano stepped up and curled it brillantly over the wall beyond Smithies and into the net to seal the victory.

Another solid display from the Fulham midfielder who deserved his goal and took it well, he controlled the midfield alongside  Reed and didn't let Cardiff settle on the ball.

Stoke City vs Bournemouth preview: How to watch, kick-off time, team news, predicted lineups and ones to watch 6 hours ago

Swansea City vs Cardiff City preview: How to watch, kick-off time, predicted lineups, team news and ones to watch 3 days ago

Preston North End vs Derby County preview: How to watch, kick-off time, team news, predicted lineups and ones to watch 4 days ago

Reading vs Barnsley preview: How to watch, team news, kick-off time, predicted lineups and ones to watch 4 days ago

Sheffield United vs Stoke City preview: How to watch, kick-off time, team news, predicted lineups and ones to watch 4 days ago

West Bromwich Albion vs Birmingham City preview: How to watch, kick-off team news, predicted line-ups and ones to watch 4 days ago 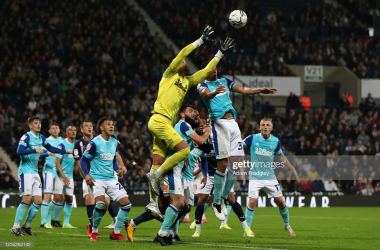 The secret behind Derby's defensive success 4 hours ago
//