Southampton have released details of their new away kit for the upcoming 2020/21 campaign.

The away strip completes the line-up for the season ahead having previously unveiled their home kit and third 'sash' strip.

Produced by Under Armour, who replaced Adidas as the sponsor of the Premier League club in 2016, the sports company are into the fourth year of their seven year deal.

The away kit continues with the theme of the first two by honouring Saint's history as the club prepares to celebrate its 135th anniversary.

Sporting a navy-blue design the kit uses the colour for the team's short and socks throughout much of their early history from 1891 to 1950.

While on the sleeves there yellow and Solent blue accents a reference to Southampton's iconic 1976 Fa Cup final triumph.

Sponsored by Chinese sports content company LD Sports the shirt will also have Virgin Media remain as it's sleeve sponsor during the next season.

LD Sports became the main sponsor of Saints in 2019 and will remain so until the conclusion of the 2021/2022 season in what represents the biggest sponsorship deal in the club's history.

Virgin Media on the other hand were the main sponsor until last season when they became side sponsor and have been in partnership with Southampton since 2016. 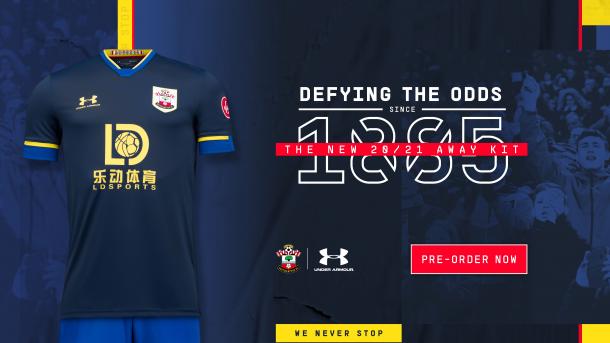 The home shirt has already broken club pre-order records, having also been worn in the South Coast side's victory over Sheffield United, with the away kit expected to follow suit.

The new kit will be available to purchase from Monday 17th August and available to pre-order on Southampton's official website or by visiting their store in the West Quay shopping centre in the city.