Lisa Fallon's long awaited debut in the Championship was met with disappointment. The Irish international was appointed City's head coach in May and has been building up her squad who finished fourth in the curtailed 2019/20 season. 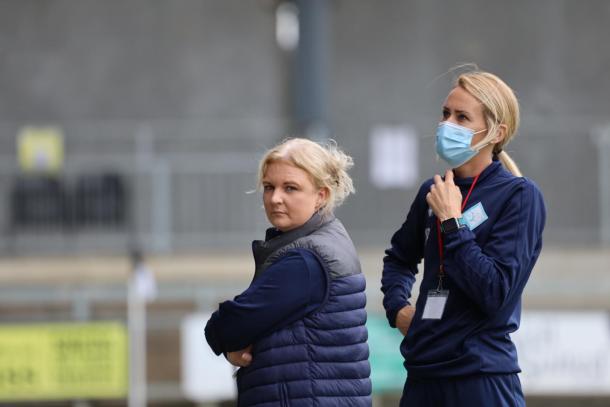 Neil Redfern prepared his side well to shut down any of their host's attacking play. Their high press saw them maintain most of the possession throughout the match and were the more dangerous side of the afternoon.

The Blades managed to continue their strong form into their opener after finishing in second place six points off Aston Villa.

Sheffield United's attack dominated the first half and kept their opponents under control. They crowded the midfield and blocked all London City passing lanes and forced defensive errors with their high press.

The first dangerous play of the afternoon was just ten minutes into the match when Rhema Loro-Mears grazed the top of the crossbar with a shot just outside the box.

The only outlet the Lionesses seemed to have was a long ball down the left wing from 18 year old captain and centre back, Ylenia Priest.

Elizabeta Ejupi managed to get a shot on target, well-hit and with effect, but well in the keepers ranged finished as an easy save for the keeper.

London City seemed to be targeting Kallie Balfour to run onto the ball behind the visiting back line, but captain Leandra Little was well composed to cut off the attacking run.

The hosts lacked any creative play through the middle and got themselves stuck play through their centre backs and keepers. United pressed high and forced either a defensive error or a long range clearance. 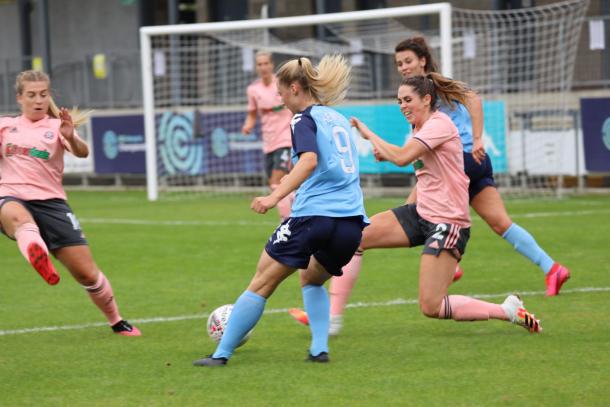 London City were awarded a set piece on the right wing, but was wasted after a practice sequence failed when United were quick to react and blocked Alli Murphy's cross into the box.

Almost all of United's attacking play came through Jade Pennock who was awarded with a goal in the 36th minute.

After her side hit the post, City weren't able to clear the ball effectively which then resulted in a Blades attack. The Lionesses were quick to cover the shot, but failed to see Pennock's run in behind at the top of the box.

Pennock received a cut back and blasted the ball into the back of the net off of her first touch.

Lisa Fallon's side came out strong in the second half and managed an equaliser three minutes in from Freda Ayisi's at the top of the box. 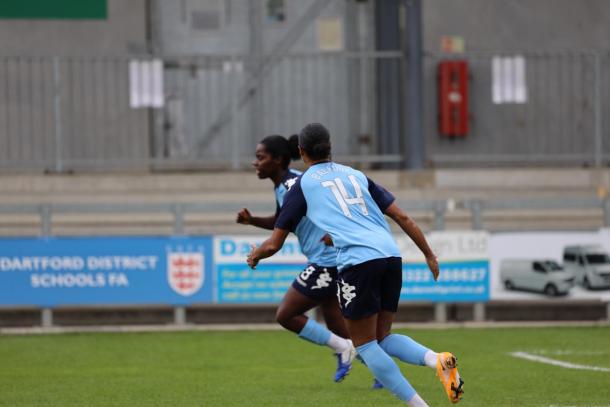 Five minutes later, another promising London City attack which saw Balfour in front of net, but she did not pull the trigger fast enough. Her shot was blocked and the referee, Sarah Garratt, did not see a clear handball from the Blades defender.

The hosts managed to keep their momentum up for another few minutes of possession, but Blades' second goal came in the 56th minute.

Pennock's second goal of the afternoon. A poor clearance from the City defence saw the ball fall in front of the Blades forward for another easy blast, well out of reach for Shae Yanez.

Yanez denied Pennock a third goal shortly after with an amazing save that saw her stretched across her goal.

London City's hopes were bruised after the referee made another controversial call against them. Sheffield United were awarded a penalty which was perfectly placed by Katie Wilkinson low and hard in the left corner in the 64th minute.

Sheffield United were able to see out the last 25 minutes of the game comfortably stopping any City attack.

"I think we started a little bit slow and let them get into the game.

"Thankfully we got a goal and put ourselves into the match, but we just needed to play our game more. It took us too long to settle and gave them too much time.

"We need to start sharp [next week against Crystal Palace], play our game, attack more and play together."