'Nobody cares' is a quib often seen in the comments sections of social media posts regarding women's sports, but recent sales statistics only further highlight that this is far from the case.

The United States has consistently proved the commercial value of women's sports with big-name sponsors such as Budweiser, Google, Nike, CBS, Twitch and Verizon adorning the footer of the Nwslsoccer.com website

Outside of football, the WNBA's hallmark orange hoodie was worn by a number of men's players in the NBA bubble as the product became a hit with basketball and women's sports supporters around the globe.

Amid a backdrop of a worrying COVID-19 pandemic sweeping across the nation, a number of players have made the move from the USA to England play their football this season. USWNT internationals Alex Morgan, Sam Mewis, Rose Lavelle, Tobin Heath and Christen Press have all made the switch from the NWSL to the FAWSL and their impact has already been clear.

According to the Daily Mail, sales of Christen Press and Tobin Heath shirts outsold any of those of Manchester United’s men’s players for the first three days after their high-profile signings. At the club who had the highest shirt sales in the world during the 2018/19 season, that's a big deal.

The new transfers from the NWSL has coincided with a spike in interest from the USA. The search term 'Tottenham Hotspur Women' received its highest ever interest from the United States around the time of Morgan's move according to Google Trends.  Similar spikes in interest were seen around the other additions to clubs in the league with interest to 'Manchester City Women' and 'Manchester United Women' also increasing. 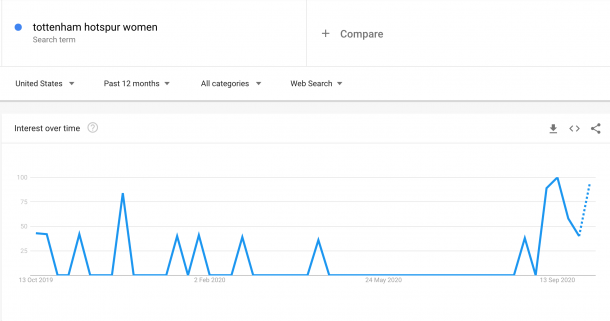 Coming back from pregnancy and a large time out of football, Morgan will likely not provide the same on-the-pitch impact as the other American additions, but it's the epitome of a 'sensible transfer' from Spurs.

Clubs traditionally make 7.5% commission from shirt and merchandise sales. At £70 per shirt, it would take 19,048 to be sold to earn the club more than the £100,000 prize money that the winner of the division receives. With more followers on Instagram than the club's official account, it would not be a difficult feat for Alex Morgan's total 13.3m followers across Twitter and Instagram to convert that number of people.

With their big-name signings, Tottenham Hotspur and Manchester United have placed themselves in the spotlight in women's football's biggest market. Despite both clubs being in the top flight for only their second year, they have, at least commercially, now earned themselves a spot among the biggest through their latest signings.

For Spurs, who do not have one of the biggest brand names in the world behind them, Alex Morgan will help to grow both the men's and women's side's popularity in the country with the addition of Gareth Bale adding a sense of familiarity in a market where Real Madrid already carry the same brand familiarity as the likes of United.

If the Women's Super League wants to stake a claim as the best women's football league in the world, it has to be able to sustain itself financially. At the moment, the majority of clubs in the division make losses and are subsidised by a men's side with little security to their own finances.

The demise of Sunderland from the top flight coinciding with the men's side's drop from the Premier League and subsequent financial struggles has already been seen and shown just how volatile women's sports can be if the financial backers opt to pull the plug.

This season, women's football in England has increased its global viewer base with deals brokered via AtaFootball to show the league in the USA, Germany and Italy - only further opening avenues for increased investment.

Domestically, the division's TV rights are available for purchase when the current English broadcast deal ends and it looks likely that Sky Sports will air WSL fixtures from the 2021/22 season onwards according to reports from the Telegraph.

More has to be done to seize the opportunities available if women's football in England is able to stand on its own financial footing. The recent round of the Continental Cup showed a state of nonchalance from broadcasters with only a handful of games available to watch on club's in-house streaming services.

An often-untapped market is there for women's football but it needs to be taken seriously for the value to be properly utilised. When fans want to spend their money, it's not good enough if a player's shirt is not available to be purchased, if women's sizes aren't available or if they do not ship internationally.

West Ham United Women vs Manchester United FA WSL Preview: Kick-off time, team news, ones to watch and how to follow 5 days ago

Reading vs Manchester City FA WSL Preview: Kick-off time, team news, ones to watch and how to follow 6 days ago

Chelsea FC Women vs Manchester City Women: WSL Preview: Kick-Off time, team news, ones to watch and how to follow 12 days ago

England women to face Norway at Bramall Lane 14 days ago

"If people aren't talking about you, then you're not doing the right thing" - Casey Stoney ahead of facing Tottenham in the FA WSL 14 days ago