It's Halloween on Saturday and Premier League clubs will be trying their best to avoid any more scares in the craziest of seasons.

Last week, we saw a more defensive-focused week with Manchester United's clash with Chelsea bringing us the second stalemate of the top flight season. It's almost as if some managers have had enough with the recent cricket scores, wanting to restore a bit of order to proceedings.

It has been a case of the good, the bad and the ugly for Man United this season. A hard-fought Champions League victory over Paris Saint Germain was followed up in the next group match with a 5-0 annihilation of Bundesliga leaders RB Leipzig. United's exploits in Europe provide optimism that they can kick on again domestically.

Arsenal have also had their ups and downs. Two wins out of two illustrated their intent at the start of the campaign. However, three Premier League defeats in their next four have frustrated supporters with their lack of goals being brought into question.

Ole Gunnar Solskjaer has come in for a lot of criticism for not for rarely using £40-million man Donny van de Beek. The Norwegian could be carefully trying to ease van be Beek into his new environment but, for him to do that without opposition, United have to be winning games. He started against Leipzig, though.

Since signing a bumper new contract, Pierre-Emerick Aubameyang has performed a vanishing act. Mikel Arteta plays the Gabonese star on the left in order to maximise his potential to score goals and Aubameyang has to make more use of that role. Perhaps he should be using Heung-min Son as a point of reference.

Neither team is comfortable at the back and both managers have been putting a recent emphasis on defensive shape. This really could play out like a game of chess. Do we sit off or press? Do we look to play between the lines or do we go direct? An intriguing contest between two managers who are trying to make the most out of what they have.

They are picking up points but it has been a difficult start to the season for Wolverhampton Wanderers. Collectively, there does seem to be a bit of tiredness creeping in after last season's lengthy campaign.

Crystal Palace are very capable of grinding out results but it's not always sunshine and roses. When points aren't picked up and the style is bad, it's doubly bad. Last week's 2-1 victory over Fulham was a reprieve against their three matches without a victory.

The first goal is always huge with these two teams. Neither are as effective when they have to chase a game. It's anyone's to win but the in-form Wilfried Zaha could be a difference maker.

Sheffield United put in a valiant effort against Liverpool; the game had the feel of a classic FA Cup tie. The Blades play the ball around with confidence but have lacked a killer instinct all season. From the final pass to the finish, United have been struggling.

Manchester City are slowly getting back into their stride. Their 3-0 victory over Marseille in the Champions League was a signal of intent from the sleeping giants.

Marseille are a better team than the Blades and Pep Guardiola's team swept them aside. But Chris Wilder will ensure that his team defend as a collective and make life very difficult for their progressive opponents. It shouldn't be a walk in the park, especially without a recognised striker being fit and available.

Burnley were very unfortunate against Tottenham Hotspur. Their defensive resolve was strong but Son's athletic header was enough to hand Spurs victory.

Frank Lampard's tactics to secure a point at Old Trafford were polarising. Some people praised Chelsea's defensive organisation while others criticised his rather negative approach.

Burnley didn't deserve to lose against Spurs but their lack of cutting edge was noticeable. The final ball was often not as precise as it could have been. They might struggle against a rejuvenated Chelsea defence but, equally, Chelsea's attack could have a tough time breaking down Burnley's deep-block.

Liverpool are having an injury crisis. Virgil van Dijk will probably miss most of the season while Joel Matip and Fabinho have also picked up injuries. They may have to call upon rookie Rhys Williams to temporarily fill the gap next to Joe Gomez.

What a turn around for West Ham United. All that talk of mutiny in the dressing room has quickly disappeared; the Hammers are now unbeaten in four Premier League matches. However, Michail Antonio will miss the game due to injury; a big loss.

There has been an unsustainability about West Ham's goals. Their last four goals have either been a wonder goal or a result of a defensive fault. Liverpool were looking thin on the ground but they have the character to pop David Moyes' momentous bubble.

The wheels came off against Leeds United for Aston Villa. They tried to go toe-to-toe with Marcelo Bielsa's team and suffered the wrath of the in-form Patrick Bamford.

Southampton are back! After a disastrous start to the season, the Saints are now unbeaten in four matches, winning three of those. Their pressing, high-tempo style is now up to speed again. Danny Ings and Che Adams are a very troublesome strike partnership.

The momentum is with the visitors and they will fancy their chances. Villa have had a setback and will hope to respond to it quickly. But this team ended Everton's winning run and should not be underestimated.

Newcastle were very fortunate against Wolves. They played with a deep-block and simply looked to stifle their opponents. Steve Bruce's football has taken a lot of criticism from the Toon Army but he has results to back up his decisions. Two wins, two draws and two defeats; a very solid start to the season.

It was a sobering result for Everton, last weekend, as Southampton comfortably got the better of them. Their winning run was never going to last forever and the Saints are a team on the up.

The Toffees will be without Lucas Digne and Richarlison due  to suspensions while James Rodriguez and Seamus Coleman are injured. Newcastle aren't performing particularly well but Everton's attacking output has been decimated; the amount of key absentees should give plenty of confidence to the hosts.

Tottenham looked much more like the stereotypical Jose Mourinho outfit against Burnley. Their attacking play was a little laboured and they were fortunate to take the three points. Nonetheless, the ability to grind out a win will have pleased Mourinho immensely.

Brighton & Hove Albion started the season as one of the division's most exciting teams. They outplayed Chelsea and Man United despite losing both matches. Unfortunately, that luck hasn't evened itself out. Poor finishing has left them with just one league victory to their name. Their setup leaves them open at the back and so it's very important for their attacking players to be efficient when chances are created.

The Seagulls could score a couple of goals against a very average Spurs defence. However, their style of play has been leaving them vulnerable in defence; Harry Kane and Son will be licking their lips.

Fulham have really improved in recent weeks but they still cannot find that elusive win. Against Palace, they created a number of chances but Aleksandr Mitrovic lacked a ruthless edge.

West Bromwich Albion have also started to improve their levels. Defensively, they look much more assured with new signing Branislav Ivanovic adding a sense of calm at the back. Offensively, they have signed Karlan Grant and he managed to find the net against Brighton but they do not look like a team that can setup to outscore opponents.

Every point is vital, this season more than ever with the unpredictability of football at this moment in time. Fulham have been a bit more inspiring than the Baggies when it comes to attacking intent. Ademola Lookman is a tough man to handle, Tom Cairney offers excellent technical qualities from midfield and Mitrovic has the capacity to score goals. Something has to give, sooner rather than later.

Leeds are the team every neutral wants to watch. They play with a refreshing sense of freedom despite not having the same level of individual quality that other teams possess. Bamford's transformation under Bielsa is nothing short of sensational; he has gone from the joke act to a very serious performer at the highest level.

Leicester City are returning to their counter-attacking identity. Brendan Rodgers is a possession-oriented coach but, in light of his current injury crisis, he has had to be flexible with his tactics. Such an approach worked wonderfully well against Arsenal; they soaked up a lot of pressure and then punished them with the pace of Jamie Vardy in the latter stages of the match.

The Foxes will fluctuate, like many others, with their results. This style of play is less proactive and more reactive but it will help them to solidify the defence. A game against Leeds will suit them much more than a game against Crystal Palace would.

The Warm Down: Academy trio shine as Reds win Group D 17 hours ago

OPINION: What is going wrong at Arsenal? 5 hours ago

Wilfried Zaha - Are Crystal Palace over-reliant on their main man? a day ago

Liverpool vs Ajax preview: How to watch, kick-off time, predicted line-ups and ones to watch&nbsp; a day ago

Mikel Arteta: Trust the process a day ago 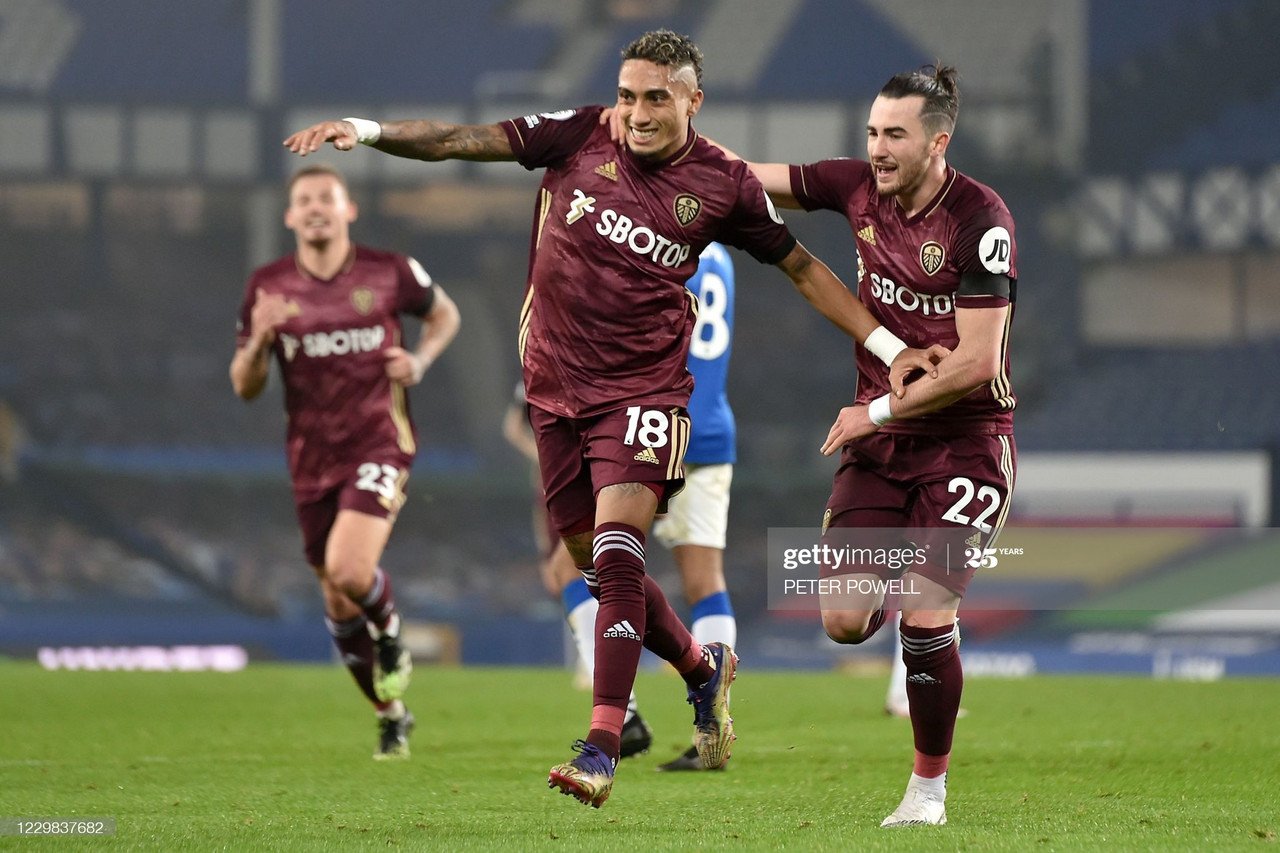