This was Arsenal's first loss to a team that isn't Chelsea or Manchester City since 2018. Joe Montemurro could do nothing but accept defeat against Casey Stoney's Manchester United; "She [Stoney] outsmarted us," said the Arsenal boss.

"The reality is that when you are a well-positioned team it’s not just one solution you have to find, it's three or four solutions and we continued to do solution one when there was solution two and three available. We weren’t smart enough, it’s simple as that."

Essentially what Manchester United did was null and be better at Arsenal's own tactics: high-press and short pass possession.

Stoney played her usual formation, 4-2-3-1 with a high front three and one high midfielder right behind the central striker, in this case Ella Toone.

Montemurro's side played with their preferred 4-3-3 formation with the front three staying high and the fullbacks finding themselves often high on the pitch in an attacking position. 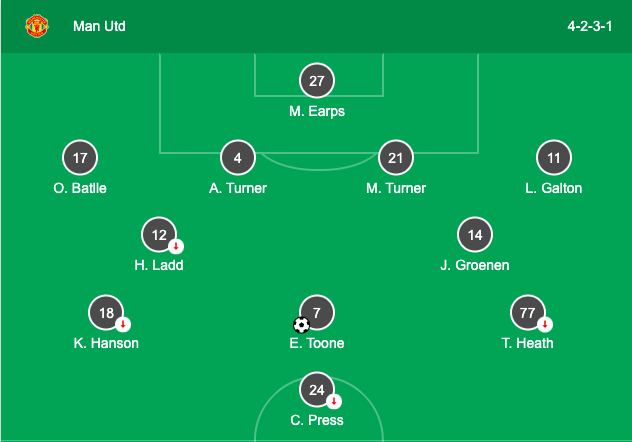 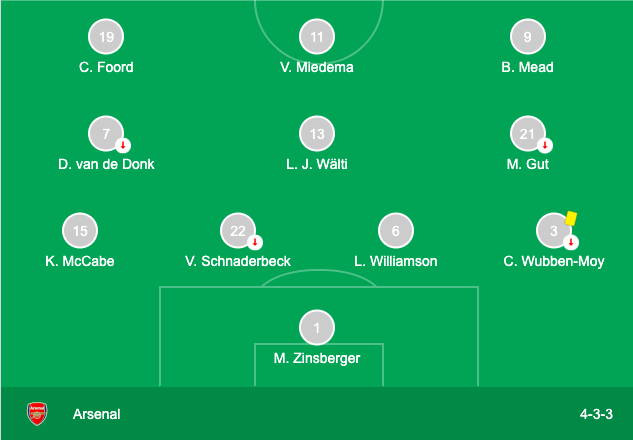 Arsenal enjoy playing out from the back with a capable centre back playmaker like Leah Williamson who feeds balls into the midfield quality of Lia Walti, Kim Little and Jordan Nobbs normally. In the match yesterday the midfield trio were Walti, Danielle Van de Donk and Malin Gut.

United did well to cut off any short passing options when Manuela Zinsberger was trying to play out the back through her centre backs like usual as displayed here:

All images from the FA Player:

Zinsberger was forced to go long in the air where United were stronger yesterday afternoon.

Here's another occasion where Williamson found herself with no short passing options and was forced to go long to try and find Caitlin Foord on the wing. The black arrow will be where Williamson wanted to place the ball:

In this occasion, the ball was short and Kirsty Hansen, #18 who is circled, was able to intercept and start a counter attack on an out of position Arsenal line.

On the rare occasion Arsenal did find space to build from the back, United sprinted their way across to close down spaces as seen here when Viktoria Schnaderbeck finds herself with an option; Katie McCabe down the left side:

As mentioned, United sprinted across and closed down McCabe who is left with only two options, either send the ball back for Scnaderbeck to kick it up the pitch or find a way around her player.

Displayed below is another example where Arsenal were cornered into their own goal when United severely cut off all passing options. The player with the ball is circled and has a quick Tobin Heath closing down on her.

The ball was passed into Walti, who had Jackie Groenen immediately on her back. Her only option then was to pass it back to Williamson, who would have to send the ball forward and hope one of her teammates would get to the end of it.

Let's compare this to a match where Arsenal had 82% possession and won 3-1 against Bristol City who didn't press as aggressively as Stoney's team.

In this example, we can see Jen Beattie receiving the ball from Zinsberger with four different options and two teammates who find themselves unmarked and with space in front of them, in this case McCabe and Walti to her left.

Beattie picks Walti who finds herself with enough space to take multiple touches on the ball, look up and pick out her next pass into the feet of Van de Donk in the midfield which beats Bristol's midfield line.

If we look very briefly at Arsenal's attack, they finished the first half with zero shots. United finished the match with double the amount of shots and shots on target. Arsenal managed 11 shots to their host's 23.

Though, possession was won by Arsenal with 57% and had just 26 more passes than United with 370; in the last three league matches the Gunners have completed over 600 passes in each game, with the two prior to those being 491 and 464.

Yes, United perhaps outsmarted their opponents on this instance, but Arsenal didn't make it easy on themselves going forward with most break throughs resulting in one of their players having limited options and being outnumbered from United players.

Particularly, Vivianne Miedema didn't get the ball to feet or into space often which then found herself having to drop to receive the ball. On this instance was where United's lone goal started from.

Miedema dropped to receive the ball, pulling out Amy Turner (circled in blue) from position and was looking to slide the ball through for Jill Roord who was running into the space left behind (circled in white) by the striker and centre back:

With another brilliant display of United high and aggressive press, Turner was able to slide tackle the ball away from Miedema and into the feet of Lauren James (circled in red) to start the United counter attack which resulted in Ella Toone's goal.

The Spanish Women's National Team Euro Squad: The Desire for Success but a Managerial Failure a month ago