That’s all from me, I hope you enjoyed the live coverage of the game! Be sure to check out our other content on Vavel.com
16:572 months ago

Full-time at St Mary’s and United have turned it around! Two Cavani goals have secured the three points for the Reds, who were 2-0 down!
16:542 months ago

From a free-kick, Marcus Rashford collects the ball and crosses it in and Cavani nods it in for his second and United’s third.

FIVE minutes added on. Can either of these teams get a winner?
16:502 months ago

Another good free-kick from Ward-Prowse. He has been excellent today. It’s eventually cleared by Harry Maguire.
16:392 months ago

Che Adams almost restores Southampton’s lead. The striker brings the ball down well in the area and flashes a shot past Henderson’s goal.
16:352 months ago

Corner comes in and it drops to Bruno Fernandes who shoots from just outside the area. The shot is a weak one but Cavani meets it and heads it past Alex McCarthy. 2-2!

Southampton’s first substitution of the game, Shane Long comes on with Moussa Djenepo the man replaced.
16:232 months ago

Southampton’s turn to attack as Moussa Djenepo fires a shot form just outside the area wide of the post under pressure from United defenders
16:202 months ago

United are back into the game!

Finally the pressure tells as Cavani whips one into the area and that man Bruno Fernandes gets on the end of it and tucks it away! United will get confidence from that, they have played better than the score line suggests.

Fred crosses it in and a huge goalmouth scramble occurs before Edison Cavani blasts one over the bar on the turn.

United have had their chances!

Rashford goes through on goal and shoots but it’s well saved by Alex McCarthy.

He should’ve squared it to Cavani!

United are hoping that Cavani will give them more attacking intent in this second half to try and get them back into the game.

For now, Southampton are on the attack, another threatening James Ward Prowse free-kick is cleared away by United.

Henderson makes his first save in the League in a United shirt as Theo Walcott fires a shot in.
16:052 months ago

Southampton are just 45 minutes away from only their second win at St Mary’s against United.

Dean Henderson makes his first Premier League appearance for Man United as he comes on for David De Gea for the second half.

Half-time at St Mary’s and Southampton are deservedly 2-0 up. Both teams have had chances but James Ward-Prowse’s brilliance has shone through with a wonderful assist and an even better free-kick.
15:432 months ago

Southampton have clearly been the better side but United have had their chances. Not clinical enough from the Reds.
15:372 months ago

That was Ward-Prowse’s 9th goal from a direct free-kick in the Premier League since his debut in 2012.

James Ward Prowse hasn’t been absolutely fantastic in this half and it’s his brilliance again that does it for Southampton.

He bangs in a free-kick on the edge of the area, leaving David De Gea with no chance.

Fantastic double save from Alex McCarthy!

It all comes from his own doing as he passes the ball straight to Mason Greenwood and puts his team in all kinds of trouble.

Greenwood fires a shot in and McCarthy is only able to parry it straight into the path of Bruno Fernandes but he gets straight up and saves the second shot as well!

Southampton close to doubling their lead!

Flying full-back Kyle Walker-Peters gets into the box and fires in a shot which cannons off the post!

Brilliance from Ward-Prowse for not the first time this season.

He has got to be careful however. Already on a booking, he goes in hard on Donny Van De Beek and gives away the foul. He won’t get away with many more of those before the red card comes out.

Jan Bednarek heads in to give Southampton the lead!

Southampton gain a corner from the previous free-kick and Ward-Prowse delivers a brilliant ball-in which Jan Bednarek gets to first and heads it past a despairing David De Gea.

Bruno Fernandes gives away a foul on Theo Walcott.

Southampton have a free-kick in a good crossing position. James Ward-Prowse stands over it...

Ooof close one! Bruno launches a shot from around 25 yards out and it’s a great effort, just clipping the post as it goes behind.
15:152 months ago

Oriol Romeu goes in hard on Bruno Fernandes and gives away the foul. Free-kick to United. Bruno is down receiving treatment but it looks as though he’ll be okay to carry on.
15:102 months ago

Penalty shout from United as Marcus Rashford goes down in the area.

VAR does have a look, but decide that referees Jonathan Moss’s decision was the correct one, no penalty.

First chance of the game goes to United!

A defensive mixup from Southampton allows Mason Greenwood in on goal. He goes round the Saints keeper Alex McCarthy but only finds the side netting with a shot.

Scrappy start to the game as both sides try to find their feet. Early chance to get forward for United left-back Alex Telles who whips in a good looking cross but it comes to nothing.
15:022 months ago

As with all the Premier League games this weekend, the teams line up for a minutes applause to remember football icon Diego Maradona, who died earlier this week.
14:562 months ago

August 2003 was the only time that the Saints have beaten Manchester United at St Mary’s in 15 attempts. James Beattie scored the only goal as they beat a United side on top form.

Can  they repeat that today?

Kick off just 20 minutes away!

The last time these two sides met was one to forget for United fans.

Having led 2-1 for most of the game, United finally let Southampton’s pressure tell when Michael Obafemi scored a 96th minute equaliser.

The big news from the United camp is that Donny Van De Beek starts for the first time in the league. Reds fans will be excited to see what he can bring to the midfield.

Elsewhere, Mason Greenwood and Nemanja Matic come into the starting eleven whilst Edison Cavani drops to the bench.

Anthony Martial isn’t included for this one.

Unsurprisingly given their recent form, Southampton are unchanged from the side that drew 1-1 with Wolves last Monday. Che Adams and Theo Walcott continue to lead the line with Danny Ings out injured.
14:052 months ago 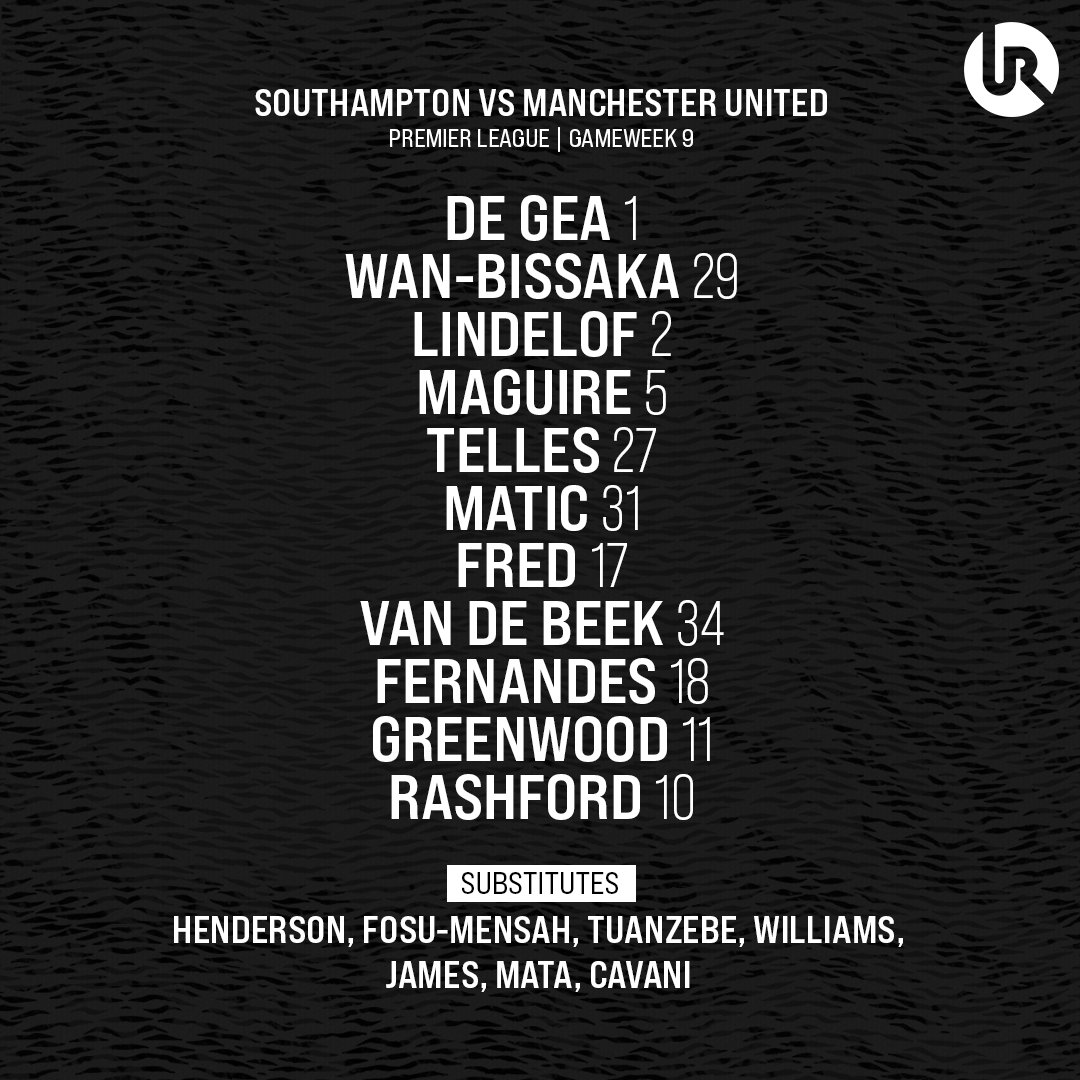 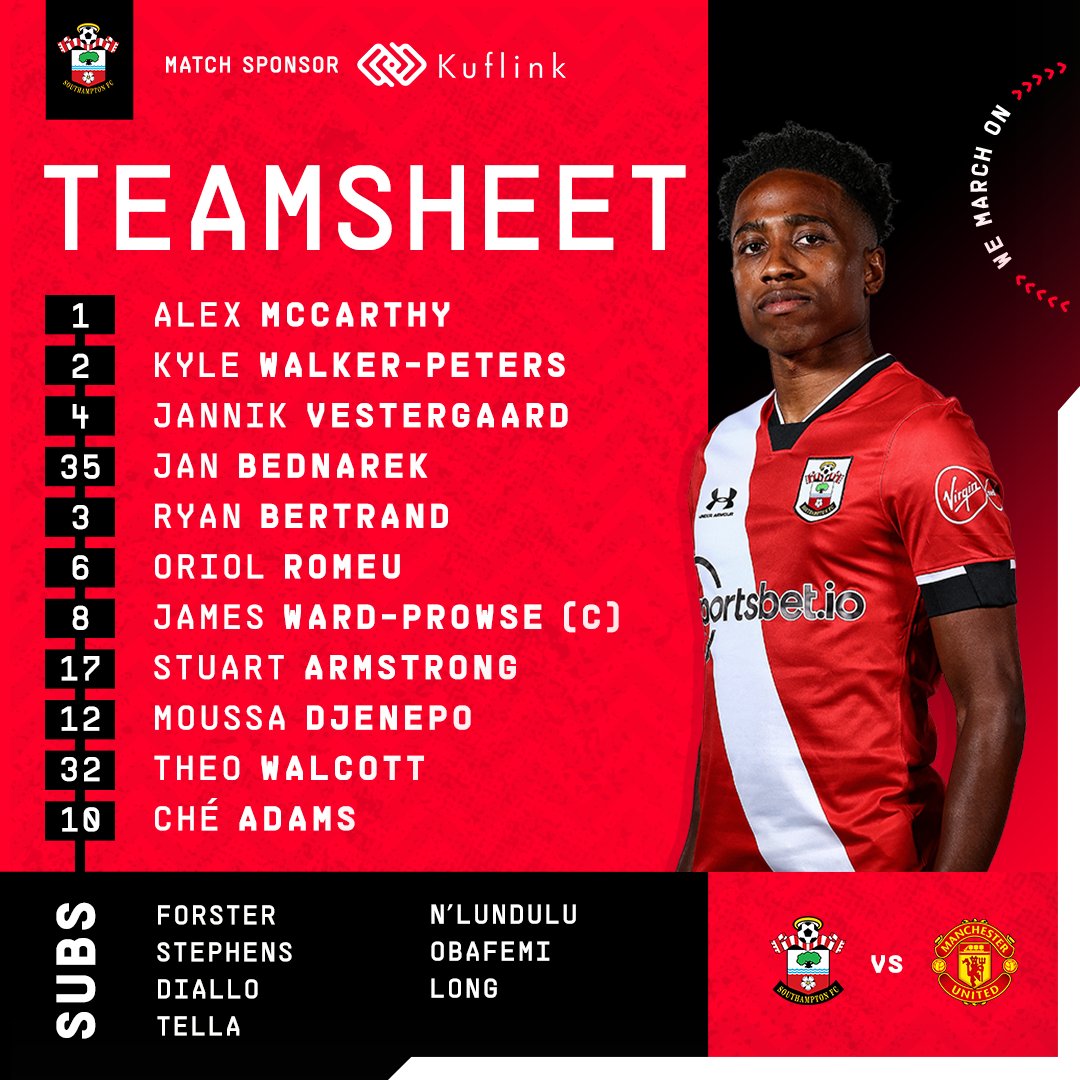 Starting XI’s to be announced in five minutes!

Just five minutes until we get to see who will be lining up for the game!
13:552 months ago

Hasenhuttl: “We are the underdog.”

Southampton manager Ralph Hasenhuttl also showed respect to the opposition in his press conference saying: “We know it’s tough, we are the underdog, but we go into this game to be as competitive as possible.”
13:512 months ago

Ole Gunnar Solskjaer: “They’re one of the top teams”

“(Southampton) have done well, if you look back on a 30-40 game block, they're one of the top teams. So they've made great improvements and we know how difficult this game is going to be. We drew twice against them last season so, for us, this is a game we can make an improvement on.”
13:432 months ago

How to watch Southampton vs Man United

In the UK, the match will be shown on Sky Sports Main Event and Sky Sports Premier League.

Or follow along on the internet where VAVEL UK is your best option!

If United manage to beat Southampton today, Ole’s men will set a new club record of eight consecutive away league wins. That’s a run which stretches all the way back to 30 June.
13:392 months ago

Both of these sides go into the game in good form. Southampton are looking in fine fettle going into this one. A poor start to the season has been followed up by a seven-game unbeaten streak in the league. They have won five of those seven matches and are currently sitting in fifth in the table, just three points behind early pacesetters Tottenham Hotspur.

Earlier this month, Southampton sat on top of the table for the first time since 1988, albeit only for a day.

United, on the other hand, have won three games in a row in all competitions and won last time out in the league  against West Bromwich Albion thanks to a Bruno Fernandes Penalty.

That was their first home win of the season and it put United into the top half of the table for the first time this season.

Manchester United manager Ole Gunnar Solskjaer has said it is "very unlikely" that either Paul Pogba or Scott McTominay will be available.

Luke Shaw is still out but Marcus Rashford, Victor Lindelof and Aaron Wan-Bissaka should all be fit.

Southampton remain without Danny Ings and Nathan Redmond because of respective knee and hamstring injuries.

Theo Walcott will continue playing despite having a broken bone in his left wrist.

Kick off is in 90 minutes time.

Southampton vs Manchester United will kick-off at 14:00 BST. It is to be played at St Mary’s stadium in Southampton.

Welcome to Vavel UK’s LIVE coverage of the Premier League match between Southampton and Manchester United. My name is Sam Cook and I’ll be your host for this game. We will provide you with pre-game analysis, team updates and news as it happens live here on Vavel.com

Hasenhuttl: "The perfect night"16 days ago

Key quotes: Hasenhuttl looks ahead to Liverpool challenge16 days ago

Southampton vs Liverpool Preview: Staying in the mix at the top17 days ago

What are the reasons behind Southampton’s woes in front of goal?20 days ago

A game of few chances ends in a goalless affair22 days ago
Restore your password
Please enter your user name or email.
Login Member or Writer Panel
Enjoy your own Customized Newspaperwith VAVEL topics' carousels!