Bizarrely, the hosts entered the pitch wearing their third kit, the away side the only ones wearing a 'home' strip. Tranmere had only brought their home kit to their match, and with the referee not happy with what he deemed to be a kit clash, Latics were forced to wear black and gold.

It was a first-half where the football shown in the opening 45 against Bradford City could not be replicated for Harry Kewell's Oldham. Play was concentrated down the left-wing through Cameron Borthwick-Jackson and Conor McAleny but that was a tactic which was quickly cottoned on to by Keith Hill's side.

The first-half heatmap best illustrates just how deep the hosts decided to sit. Apart from a few glimpses through Danny Rowe and Conor McAleny, Latics were on the back foot for most of the first 45. 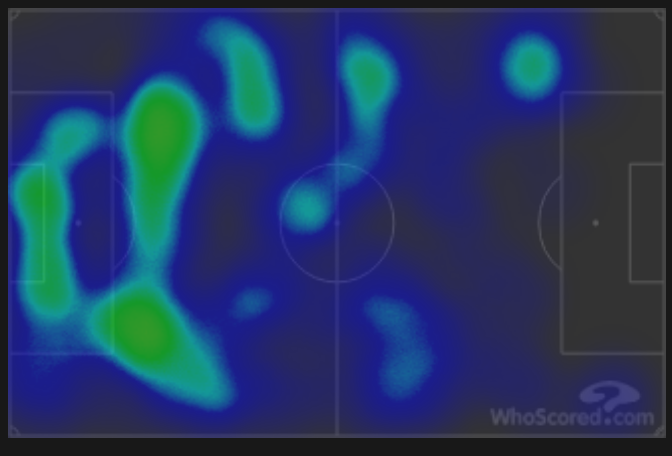 After a quickly-intercepted Rowe clearance from a corner, Liam Feeney played a cross towards James Vaughan inside of the Oldham box who headed into the back of the net to open the scoring. It was yet another set-piece conceded for Latics, one of their key flaws so far this season.

Passing fell short of the mark on numerous occasions, with a switched-on Tranmere side latching on to loose balls in the midfield and then using that as an opportunity to go forwards.

However, it was not all bad in the first half for the hosts. Alfie McCalmont put in a good performance, often turning his man and finding the space to provide good deliveries in the middle. Despite this, Oldham struggled to get past the half way line and that was costly for Harry Kewell's side.

After the break, Oldham changed their style of play slightly, focusing on taking the game to Tranmere and trying to create attacking opportunities; in contrast with the counter-attacking style of the first half.

After a good performance on Saturday against Bradford, Dylan Fage could not show that same level of class on Tuesday night. It was a comfortable day defensicvely for Calum MacDonald, with the French winger posing little threat.

After he was brought on in the 59th minute, on-loan Arsenal youngster Harry Clarke made a big difference. He greatly solidified the right wing with Dylan Fage pushed frowards and showed a good level of commitment. He stopped it from becoming two in the 71st minute, clearing a Liam Feeney free-kick off the line after Danny Rowe let the ball bounce over his head.

However, Clarke's addition couldn't help to turn the tide and the Latics suffered defeat on Tuesday night.

Passing out of place

Oldham struggled with their passing in the midfield, something which Tranmere were able to capitalise on. Inaccuracy was a regular sight, with wayward passes finding themselves at the feet of a Rovers players time and time again.

Tranmere's goal was even helped by an innacurate clearance, Danny Rowe playing the ball straight to one of the visitors who passed out wide to Liam Feeney who then put in the resulting cross.

Oldham's defensive style in the first half squandered any chances of their usual attacking prowess being able to be shown. It invited Tranmere runs and the defence crumbled under pressure, often making basic errors.

At Bradford, Oldham were at their best when they kept a hold of the ball and took the play to the Bantams, keeping the ball firmly in the opposition half and making it so that the defence did not have to do much work.

Nuno Espírito Santo: "A lot of things went wrong, starting with decisions that I made." 10 hours ago

Harry Kane; Hangover from the summer? 10 hours ago

Analysis: Brighton on the brink of reaching the pinnacle of English football 17 hours ago

The transition of West Ham United 20 hours ago

The Warmdown: Manchester United suffer back to back defeats after Kortney Hause scored the winning header in the 88th minute 16 hours ago

The Warm Down: Magpies dominate but defensive lapse proves costly a day ago

Singapore Women vs Indonesia Women preview, prediction and more a day ago
//