As for Sheffield United. the Premier League is an unforgiving place.

Hackford nearly pulled one back! But his effort was thwarted by Ward.
17:469 months ago

Ramsdale drops the ball under pressure from a Palace corner, he gathers the ball at the second time of asking.
17:439 months ago

A baptism of fire

A nice touch for Chris Wilder to bring on 16-year-old Antwoine Hackford.
17:419 months ago

Townsend drags a shot wide! Palace looking to kill the game off.
17:369 months ago

Goals conceded in the last 15 minutes of games

Palace corner met by Kouyate who sends the ball back into the box, but fails to find a red & blue shirt.
17:299 months ago

On comes Brewster for Mousset.
17:209 months ago

Zaha moving gingerly after a collision with Basham.
17:179 months ago

Townsend clips a ball into the back post, Zaha nods down to Ayew, but failed to kepp hold of the ball.
17:119 months ago

Palace forced into another change. Benteke's dead leg forces him off to be replaced by Ayew.
17:089 months ago

Benteke is down. Perhaps he has tweaked a muscle.
17:069 months ago

Palace get us underway for the second half at Selhurst Park.
17:069 months ago

"He is a showman and Selhurst Park is his new theatre!" 🎭

Eberechi Eze glides through the Sheffield United defence before finishing with aplomb! What a goal! 👏

A dagger to the heart for Sheffield United. They were growing in confidence prior to Eze's goal.

A big 45 coming up for Wilders' side.

He danced his way thorugh the Blades' defence and picked his spot to double Palace's lead!

Jayden Bogle booked for scything down Wilfried Zaha.
16:439 months ago

Clever ball from Ampadu to find McGoldrick, but he failed to squeez the ball past Guaita.
16:379 months ago

The goal scorer has pulled up. Schlupp is coming off for Eze.
16:359 months ago

Benteke fouled by McGoldrick on the half way line.

This certainly isn't a game for the football purist, but Roy Hodgson will not mind!

Benteke goes close! Touches the ball inches wide from a Zaha cut back.

Palace looks thretening on every attack, but will need to put a chance away soon to assert their authority.

McGoldrick sends a ball to the back post, but failed to find Basham.
16:269 months ago

Zaha causing havoc and wins Palace a freekick on the edge of the area.

Tomkins heads the ball back into the box, but fails to find the on-rushing Benteke.

A nightmare start for Sheffield United! 😩

Christian Benteke tees up Jeffrey Schlupp and his deflected effort ends up in the bottom corner! 🦅

Not much has happened after the goal. United trying to breach Palace's left side, however, Tyrick Mitchell is standing firm.
16:159 months ago

Mousset wins a corner for The Blades, but Benteke heads clear.
16:119 months ago

Townsend shoots from distance but it ends up in the hands of Ramsdale.
16:119 months ago

Wilders' side are trying to break through the resolute Palace side. However, Palace are standing strong and are dangerous on the counter.
16:059 months ago

A dreadful start from The Blades!

Zaha burst past John Egan, finds Benteke who flicks the ball onto Schlupp inside the area.

Schlupp then drills the ball past Ramsdale!

The perfect start for Palace.

Stuart Attwell gets us underway at Selhurst Park!
15:569 months ago

Both sides are making their way out onto the Selhurst Park pitch.
15:469 months ago

Can The dilapidated Blades' squad pick up their first win of the season?

Can Palace start to pick up where they left off prior to being torn apart by Liverpool.

Here's how the Blades line-up. 👊

The scene is set

Follow along with us all the details, commentaries, analysis and lineups for Crystal Palace vs Sheffield United!

The game will be broadcast live on Sky Sports Main Event.

On signings: “From my point of view and from the recruitment team’s point of view it’s at a level above now. It’s over to the Chief Executive & the board to hopefully get them over the line.”

On Chris Basham “I can’t speak highly enough of Bash as a player and a person. He’s a modern day manager’s dream. He’ll do whatever needs to be done to help this football club. His performances have been brilliant right the way through the journey.”

"We all know football matches either boost confidence or reduce it," he said. "If you get a heavy defeat it doesn’t do your confidence any good irrespective of how justified the result was.

"It’s part and parcel of football and one of the most important qualities a footballer can have is understanding there will be good days and bad days and you have to deal with both."

"That is one of the anomalies of football: one year a group of players playing the football they play can enjoy the success Sheffield United have and this year of course they’re rooted to the bottom of the table having been able to manage two points.

"As far as I’m concerned we’re facing a team who are very difficult to beat. We’re much more used to going into a game as underdogs… they have every bit as much of a chance, Sheffield United, of winning the game."

The Blades, although not confirmed, are thought to have Billy Sharp and Phil Jagielka absent due to testing positive for Covid-19.

Both sides looking for three points

For Chris Wilder and Sheffield United, it has been a harrowing start to their second season in the Premier League, with The Blades staring down the barrel of the relegation gun, bar some miracle.
Yet to pick up a win in the 2020/21 season, they will see this as the perfect opportunity to manifest the great escape.

For Roy Hodgson and Crystal Palace, they stemmed the bleeding last week against Leicester City, after two humiliating defeats against Liverpool and Aston Villa.

However, the Eagles will want to pick up points in what could be Hodgson's last season in charge of the south Londoners.

Crystal Palace vs Sheffield United will be played at Selhurst Park; London, England.

West Ham vs Crystal Palace preview: Can the Hammers continue their impressive streak as they host goalless Eagles? 22 days ago

Watford vs Crystal Palace preview: Can the Eagles find their feet in the form of a cup run? 25 days ago 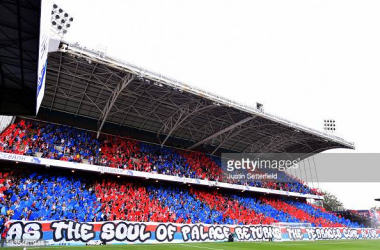