Liverpool qualify past a determined Aston Villa side who gave it their best shot.

Fourth and fifth round draw on Monday.

Final moments of what in the end looks a comfortable victory for Liverpool on paper.
22:2915 days ago

Firmino finds the side netting before Thiago goes on an impressive solo run.

A lot of these young Villa players going down with cramp now
22:2115 days ago

After making hard work of matters in the opening 45 Liverpool are coasting through to the fourth round now and will hope to play out the final moments unscathed.
22:1815 days ago

Better now from Liverpool since the arrival of Thiago and Shaqiri.

More pace on the passing and incisive play.

Salah gets involved this time and it's another high-class finish into the bottom right-hand corner
22:0615 days ago

A Shaqiri cross is converted home and it's Mane who is claiming the header as he is surrounded by defenders. 3-1
22:0515 days ago

Second goal of the season for Wijnaldum as his side footed finish puts Liverpool back in the lead
22:0415 days ago

Smart work from Salah before he finds Wijnaldum on the edge of the box who makes it 2-1
22:0315 days ago

Liverpool getting ready to bring on Firmino and Shaqiri for Jones and Minamino.

Getting stronger this team...

Salah has the ball in the net but the ref disallows for what it looks as though could be kicking the ball from the 'keepers hands.
21:5515 days ago

Time and time again the pass is off the mark from Liverpool as they cannot find the right gear.

Liverpool dictating possession once more but no chances in the opening exchanges of the second-half
21:4915 days ago

Liverpool are late out after what will have been a stern talking to from Klopp after a slow first half.

Thiago on for the Reds in place of Henderson

All level at half time as Liverpool fail to put Aston Villa to the sword like many expected.
21:2615 days ago

Salah gets a shot on target but the young Villa 'keeper Onodi is on hand once more to save well.
21:1315 days ago

Fabinho loses possession on the half way line and Aston Villa counter with some threat.

Corner for the hosts.

Two huge saves from Fabinho and then Mane to keep it at 1-0.

Louie Barry earns a corner at the other end which is dealt with.

No more chances for the visitors as the home side restrict them well in their defensive setup.
20:5615 days ago

Huge chance for Wijnaldum after a back post cross from Salah. The Dutch midfielder somehow contrives to fire over
20:5415 days ago

Liverpool as expected are dictating the play in the early moments after the blistering start and goal.
20:4915 days ago

Sadio Mane heads Liverpool ahead from a high-quality Curtis Jones delivery
20:4615 days ago

Liverpool get us going through Takumi Minamino
20:4315 days ago

Teams Are On Their Way

Both sides are out at Villa Park and we are moments away from kick-off
20:3315 days ago

We are just a little over 10 minutes away from kick-off in what should be an intriguing encounter for highly surreal reasons.
20:3215 days ago

''I spoke yesterday to Dean Smith, we wish them all really well and they comeback quickly.''

''We want to go to the next round then prepare for the rest of the season, it's not easy. We don't think about it we just win the game then we will see.''

''Yesterday we continued with a meeting when we found out a lot of Aston Villa first-team players are out.''

''This is exactly the side we had before the situation. We trained with this line-up and this is the line-up we would have used anyway.''

''We've just seen the team sheet and the lads are buzzing. We've just done a meeting in the changing room with the gaffer and we are all going to enjoy the evening.''
20:1915 days ago

''It's been a manic couple of days, one I've not experienced. There's excited boys in there, their nervous but this is an opportunity.''

''We are missing some of my Under 23 players because the manager has asked them to train with the first-team.''

This very strong line-up for Liverpool are preparing out on the pitch and will be hopeful of doing a professional job against their young opponents
20:0915 days ago 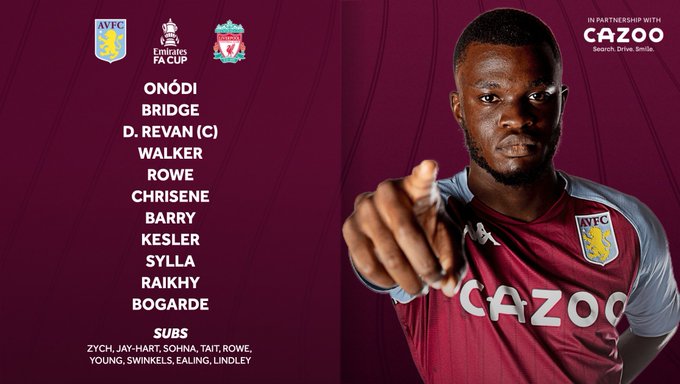 Perhaps Klopp wants some of his first-team squad to gain confidence after what has been a poor few weeks for the Reds.

Minutes in the legs remains important but the German boss will be keen not to overuse some of his stars.

Liverpool name a strong side to face what is a combination of an Aston Villa Under 23 and Under 18s side
19:5715 days ago

Liverpool haven't been past the fifth round under Klopp, a stage they reached last season before being eliminated by Chelsea.

Aston Villa were also disappointing last term as they were knocked out at the third round stage by then Championship side Fulham.

In contrast to tonight's hosts the defending Premier League champions have suffered a dip in form of late.

Despite still leading the way in the table, Klopp's men are without a win in three matches with only one goal in that time.

Dean Smith's side have been performing above expectations this season and find themselves in eighth position in the Premier League.

Prior to their 2-1 New Years Day defeat at Manchester Untied, Villa had been unbeaten in seven league matches.

It's not just cup revenge the Reds will have in mind at Villa Park.

Earlier this season Klopp's side were humiliated 7-2 by the Villans in what was the worst defeat in Klopp's managerial career.

Jurgen Klopp is expected to make a host of changes with huge Premier League encounters on the horizon.

Fringe players such as Xherdan Shaqiri, Takumi Minamino, Divock Origi and Curtis Jones should all start.

The Reds will be hoping to exact revenge from last seasons Carabao Cup defeat at the hands of Villa when they themselves were forced to field a young side with the first-team in Qatar competing in the FIFA Club World Cup.
19:2215 days ago

Tonight's clash was almost a non-starter as Aston Villa were forced to close their training ground on Thursday due to a cornonavirus outbreak.

With the entire first-team squad self-isolating the hosts are expected to field a full academy side.

Between now and kick-off we will bring you pre-match preview, team news and predictions.

We will also have pre-match manager comments in the build up to the action.

The game will be broadcast live on BT Sport with coverage starting after 19:00 BST.

If you can't watch the game, be sure to find all the live updates live here on VAVEL.com.

Welcome to VAVEL UK's LIVE coverage of Aston Villa v Liverpool in the 3rd round of the FA Cup. My name is Dan Clubbe and I'll be your host for this game. We'll provide you with pre-game analysis, team updates, and news as it happens live here on VAVEL.com

If you can't watch the game, be sure to find all the updates live here on VAVEL.com with pre-match previews, team news and pre-match manager comments. 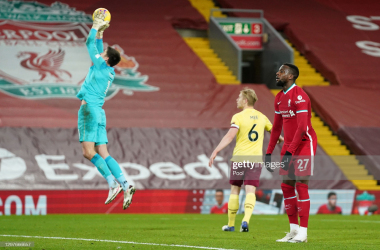 Georginio Wijnaldum: Where does the future lie for Liverpool's flying Dutchman?3 days ago

The Warm Down: Liverpool lack clinical edge again3 days ago

Liverpool vs Manchester United preview: Form guide, team news,  past meetings, who and how to watch 8 days ago

Liverpool vs Manchester United: Key battles to look out for in top-of-the-table clash8 days ago

Debate: What is Liverpool's best midfield?11 days ago

Analysis: Liverpool go three without a win17 days ago