Villa play their first league game since an away trip to Old Trafford which saw them come away with no points after a controversial penalty saw Bruno Fernandes give the home side all three points after a close game.

Manchester City are in amazing form having not lost a game since November, including wins against Chelsea, Arsenal and Southampton. This form has seen Pep Guardiola's side rise up to third in the league just two points off top spot with a game in hand on Manchester United.

It has been an unfortunate start to 2021 for Dean Smith's men only playing two games so far with no wins. A Covid-19 outbreak stopped games against Tottenham and Everton with this game being the first for the Midlands based outfit for over two weeks.

In contrast, 2021 has had a perfect start for the Cityzens with five wins from a possible five in both the Premier League and FA Cup. John Stones and Ruben Dias' partnership has been integral to this with only one goal getting past the pair so far this season, when they have played together.

Pep Guardiola has confirmed that Sergio Aguero and Aymeric Laporte will not play against Villa on Wednesday with injuries keeping both out until at least their next game against Cheltenham in the FA Cup.

Ross Barkley has trained this week and may be available for the first time since picking up an injury against Brighton earlier in the season. Wesley and Trezeguet are both likely to be out with Knee and Hamstring injuries respectively.

Manchester City's star man is undoubtedly Kevin De Bruyne with 13 goal involvements this season in 16 games. He has operated as a false nine recently where his goal involvements have only improved. With Gabriel Jesus returning, De Bruyne may drop deeper back into midfield to accommodate other players.

It has to be Anwar El Ghazi at the minute with the Dutchman getting five goals in his last six games. He has been in inspired form recently and will look to continue this into the new year. Ollie Watkins will look to get on the scoresheet as soon as possible after failing to score in his last eight games, but has earned plaudits for his work with and without the ball.

The match is available on BT Sport with live coverage starting at 5:30pm GMT.

Aston Villa vs Everton Preview: How to watch, kick-off time, team news, predicted line-ups and players to watch an hour ago

Chelsea vs Aston Villa Preview: How to watch, kick-off time, team news, predicted line-ups and players to watch 7 days ago

The Warm Down: Villa claim their first victory a month ago

Aston Villa VS Newcastle United Preview: How to watch, kick-off time, team news, predicted line-ups and players to watch a month ago

Predicted line-ups: Aston Villa vs Newcastle United a month ago 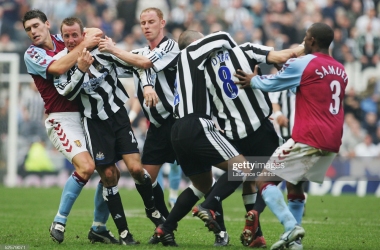 Classic Encounters: Aston Villa vs Newcastle Utd a month ago