Wolverhampton Wanderers travel to Stamford Bridge looking to win for the first time since the 2-1 over Chelsea.

The Blues are also undergoing a poor spell of form with just one win in their last five league matches.

Thomas Tuchel replaced Frank Lampard as Chelsea manager on Tuesday and the former-PSG boss will be in the dug-out tonight.

The Chelsea players will no doubt be looking to make a good first impression for their new boss.

The Wanderers will be desperate to put an end to their winless run, and get back to winning ways.

In addition to Jonny Castro Otto, and Raul Jimenez, who are still recovering from lengthy spells on the sidelines, Fernando Marcal and Morgan Gibbs-White will miss out with a groin injury, and the coronavirus respectively.

Daniel Podence could make a return to the match-day squad, however it is unlikely he will start the match.

However, Nuno does remain hopeful that Jonny will be back in the next couple of weeks.

Wolves recently secured the loan signing of Willian Jose from Real Sociedad, however he is yet to link up with his new teammates as the Brazilian is still waiting on a work permit, and a negative coronavirus test. Therefore, he will miss Wednesday's visit to London.

For Chelsea, only N'Golo Kante misses out with a hamstring injury, meaning Tuchel will have almost a full squad to choose from.

It was Neto's goal which separated the two sides just over a month ago, and the Portuguese international hasn't scored since.

Although his form has taken a dip, he has arguably been one of Wolves' best players this season, and one of the most exciting young players in the Premier League.

Usually deployed on the left, Neto will likely be up against Reece James. The right-back has the tendency to support the attack, meaning Neto may have space to operate.

On the other wing, Adama Traore will be up against Ben Chilwell who has been criticised for his defensive contribution. The former Leicester left-back may struggle against Traore's pace and power.

Chelsea also have a young, exciting winger amongst their ranks in Callum Hudson-Odoi. The Englishman made a really positive impact in Chelsea's FA Cup fixture against Luton Town, looking dangerous when driving forward.

Tammy Abraham will also enter the game off the back of a hat-trick, which sent his side to the 5th round of the FA Cup.

Wolves came out victorious when the two sides met in November. Nuno's men came from behind to win 2-1 at Molineux.

Neto scored in the 95th minute, 30 minutes after Podence equalised the scoring.

The game will be shown live on BT Sport 1 and coverage starts at 5:30pm with a 6pm kick off.

On This Day: Jimenez leads Wolves to last victory in front of supporters 18 hours ago

Post-Match Analysis: Wolves and Newcastle play out an entertaining draw on Tyneside 2 days ago 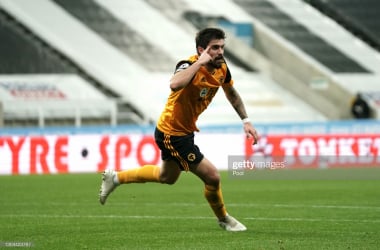 On This Day: Bakary Sako scores a quickfire double to sink Fulham. 6 days ago
//