The full time whistle at the Ferenc Szusza Stadium capped off an end to a certain kind of UEFA Women's Champions League game, but what truly happened last week was more than what the scoreline suggested.

Wolfsburg produced arguably their best performance of the season despite the problems surrounding them all season with their coach and two best players not extending their contracts as well as having their best player, Pernille Harder, leave.

You could forgive Wolfsburg if they had rolled over and allowed Chelsea to dominate proceedings but instead, they were spurred on by the occasion and have now put themselves in a favourable position to go through, though it could have been much more. Stephan Lerch devised a near-perfect plan to best Chelsea but it fell just short.

The first area that needs closer examination is the team shape and setup. Chelsea set up in a 4-3-1-2/4-4-2 diamond with Sophie Ingle, Melanie Leupolz, Ji So-Yun, and Pernille Harder making up the midfield with Sam Kerr and Fran Kirby as the front two.

This worked well against Everton who played a 4-2-3-1 but were more passive and preferred to soak up pressure whilst hitting Chelsea on the counter-attack, which they nullified.

Wolfsburg adopted a similar approach with a 4-2-3-1 shape but the biggest difference was their aggressive approach. The team’s attack consisted of Fridolina Rolfö, Alexandra Popp, and Svenja Huth with Ewa Pajor leading the line.

Ingrid Engen and Lena Oberdorf played as the double-pivot and provided the front four with a base to press aggressively. What is interesting about this setup is the pace and power the three attacking midfielders have between them.

Rolfö and Huth are particularly dynamic in their own ways. One is a fast, flying winger who relies on pace and excellent individual skill to beat a player to cross whilst the other is a lot more reliant on key passing and intelligent off-the-ball movements bringing other players into play.

This combination keeps them unpredictable and given the powerful movement of Popp, it’s theoretically a different proposition for this Chelsea side to handle. Pajor, however, played an integral role here with her movement across to hold up play and add to the numerical superiority which will be explained later on.

In most cases, playing a 4-4-2 diamond (or 4-3-1-2) allows for more vertical superiority through compactness and depth. When you have teams that solidify the central areas, you force the opposition away from the middle and instead change the angle by forcing them wide, which gives the defending team more time to organise themselves. 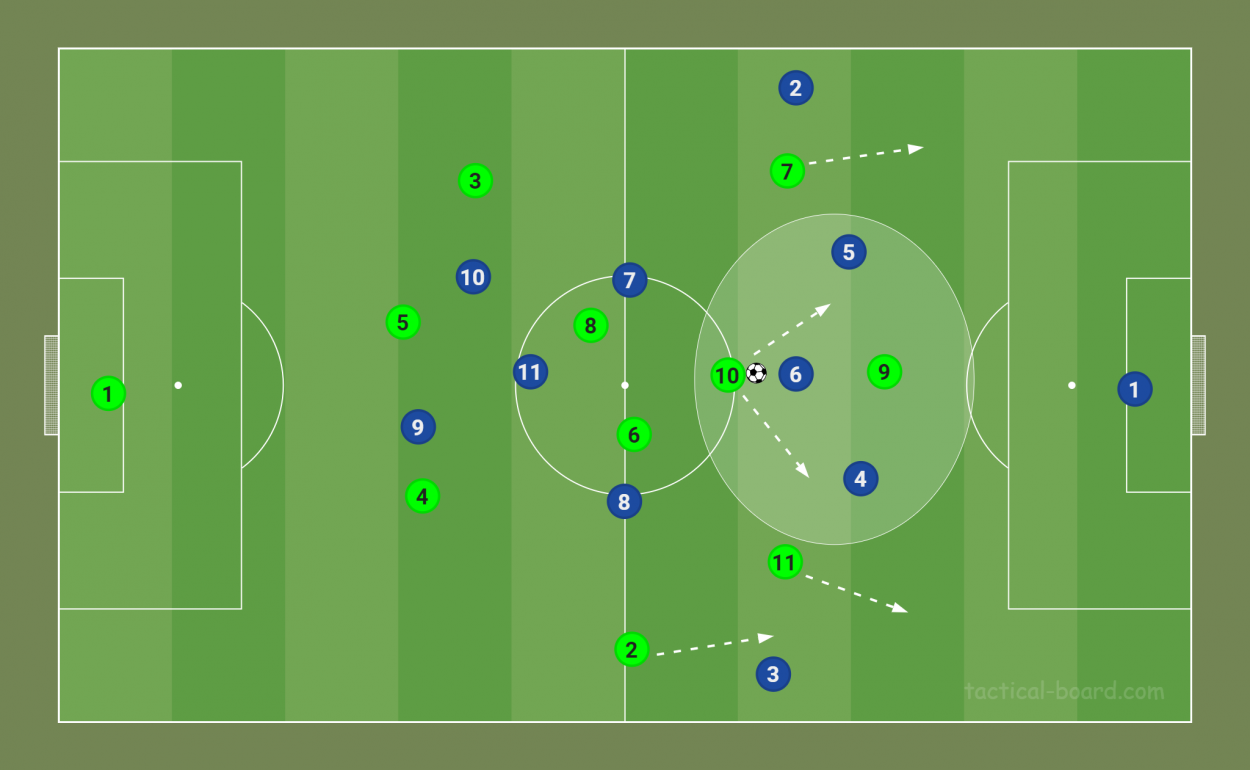 The tactic board highlights the importance of space occupation and the areas Chelsea were compact in, forcing Wolfsburg away from the middle. That’s a potential 3v2 situation for Chelsea which then forces the ball carrier to choose another option out wide.

There’s an excellent article on the theory of space occupation and creation by Domagoj Kostanjšak for a better understanding of this concept.

This is different when it comes to teams who hold a low block or high press, but in this case, Chelsea offers more space in behind, being the more dominant team in terms of possession.

This also has an added effect of naturally higher up the pitch. The team shapes had an effect on the way Wolfsburg wanted to press Chelsea and close the gaps.

Wolfsburg’s out-of-possession shape remained compact to stifle Chelsea’s build-up and stop them from playing through the middle. Stopping this would present them with an opportunity to frustrate Chelsea and wear them down.

Lerch diligently held a lower defensive line to negate long passes into the front three. This pressing strategy was used to win back possession and ultimately force Chelsea onto Wolfsburg to open up the spaces in behind.

The key element was using one defensive midfielder to provide extra support in the press. This would either be closing down passing lanes or pressing the player. Oberdorf was particularly important here and was critical in winning back possession.

They played a mid-block holding a strong 4-2-3-1 shape when Chelsea were building out from the back and positioned themselves in between Chelsea’s players. Wherever the ball moved, Wolfsburg moved across as a team whilst maintaining the pressure man to man.

This enabled them to force the ball carriers to pass it quickly and force mistakes in passing between the backline. The next example illustrates Wolfsburg’s shape and positioning of their midfield and attack. 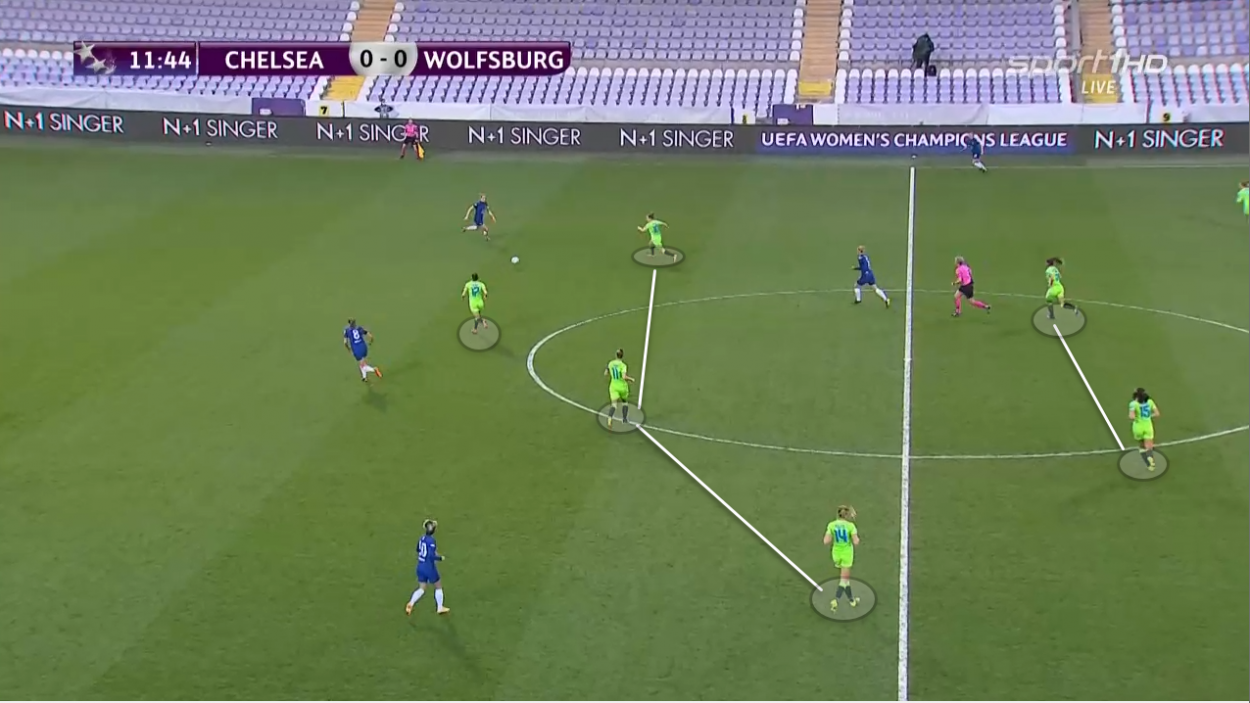 The two defensive midfielders were also pivotal by stepping up and closing the gap when Chelsea stepped past the halfway line. One would hold while the other provided support pushing forward aggressively.

In this instance, Oberdorf stepped up to close down Harder or Kirby (if she dropped into midfield) and ensure any supply would be cut off to Kerr.

The ball from Ingle comes straight to a dropping Kirby who is immediately pressed by Oberdorf and is forced back. 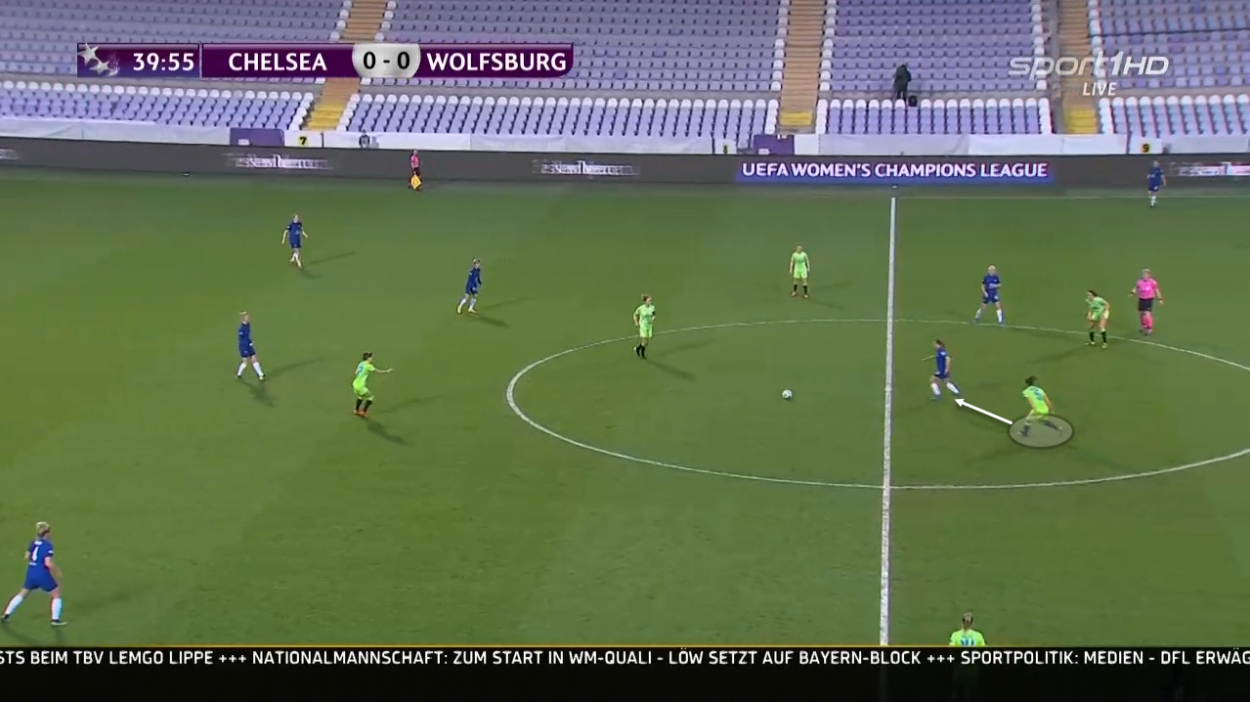 As a result, the Germans trapped Chelsea by pressing the next ball receiver and winning it back high. Any passes that went over the top were swept up by the defenders. 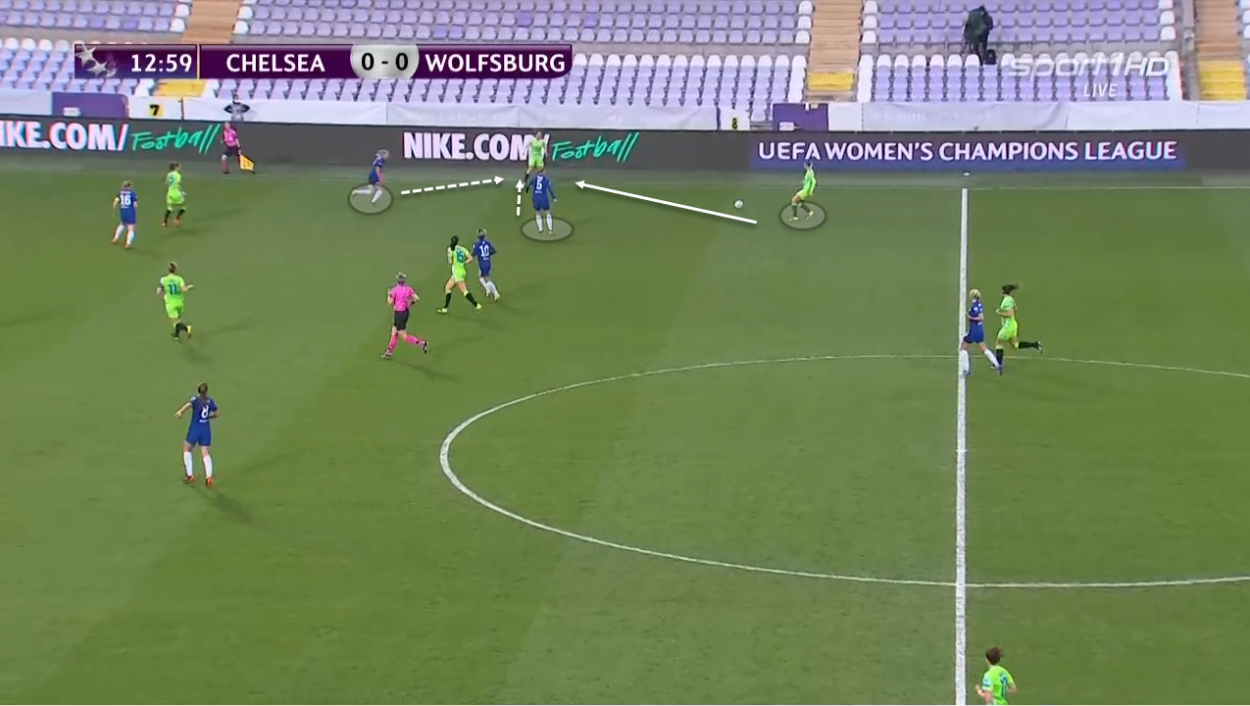 In this example, Wolfsburg managed to attract Chelsea’s players towards the ball side, with Ingle, Jonna Andersson, and Magdalena Eriksson all across to stop the wide build-up. What’s important here is the first pass into full-back Felicitas Rauch, which triggers Andersson and Ingle to press. 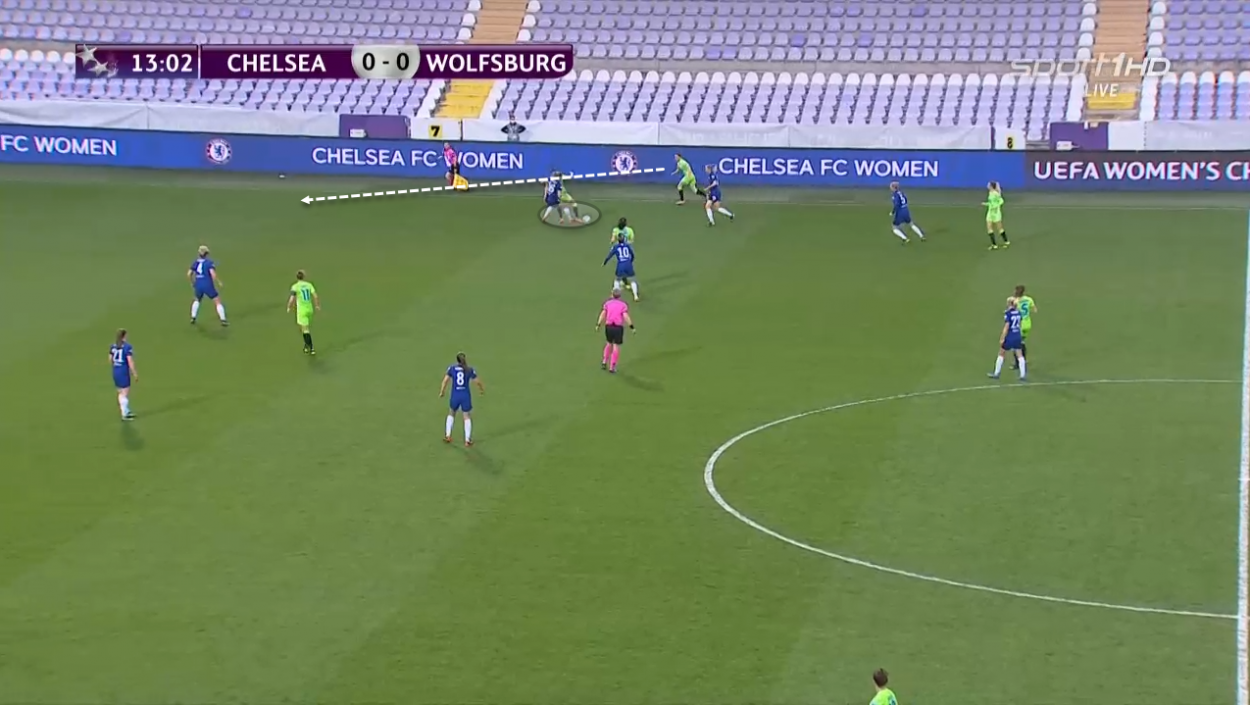 The defender immediately plays a pass into Pajor who holds up the ball against Eriksson, laying it off to then make a darting run behind the centre-back. This off-the-ball strategy was the foundation of Wolfsburg’s plan and enabled them to carry out their attacking plans with precision.

The well-thought-out plan needed an end result, and that was Wolfsburg taking advantage of the spaces behind the full-backs. Both Andersson and Niamh Charles were naturally positioned high, however, they were forced to step up even more to stop Wolfsburg’s wingers from pushing on and creating overloads.

Given Chelsea’s high defensive line, their general position of receiving was high anyway which meant Wolfsburg were not only able to engage in executing their pressing trap but also using the space in behind. 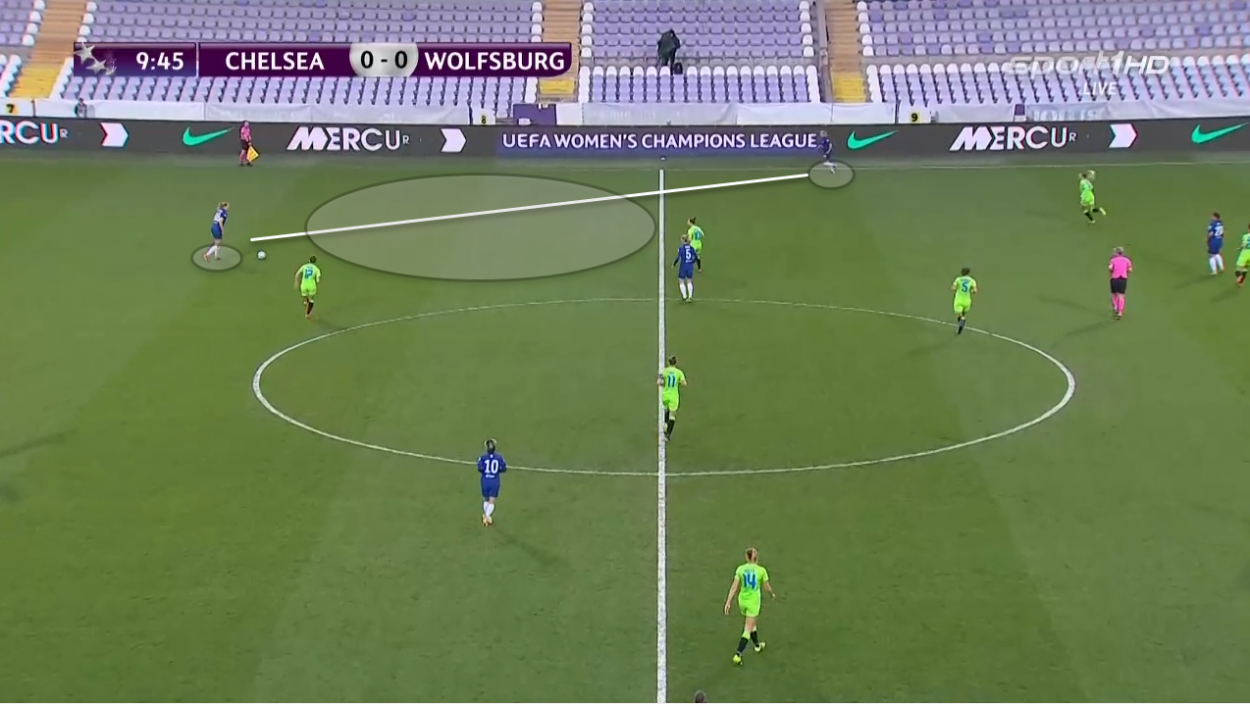 Now the main reason they were able to exploit these areas was because of Pajor’s movement as the central striker. The Polish centre-forward shines in a pressing role and is deceptively good at creating space through hold-up play, but arguably excels more so in her movement.

Pajor was constantly moving and she used the channels to good effect, ensuring her in space and creating an attacking overload for her team. Where Oberdorf provided an extra body of support in defensive pressing situations, Pajor carried out a similar task when it came to overloading the wide areas. 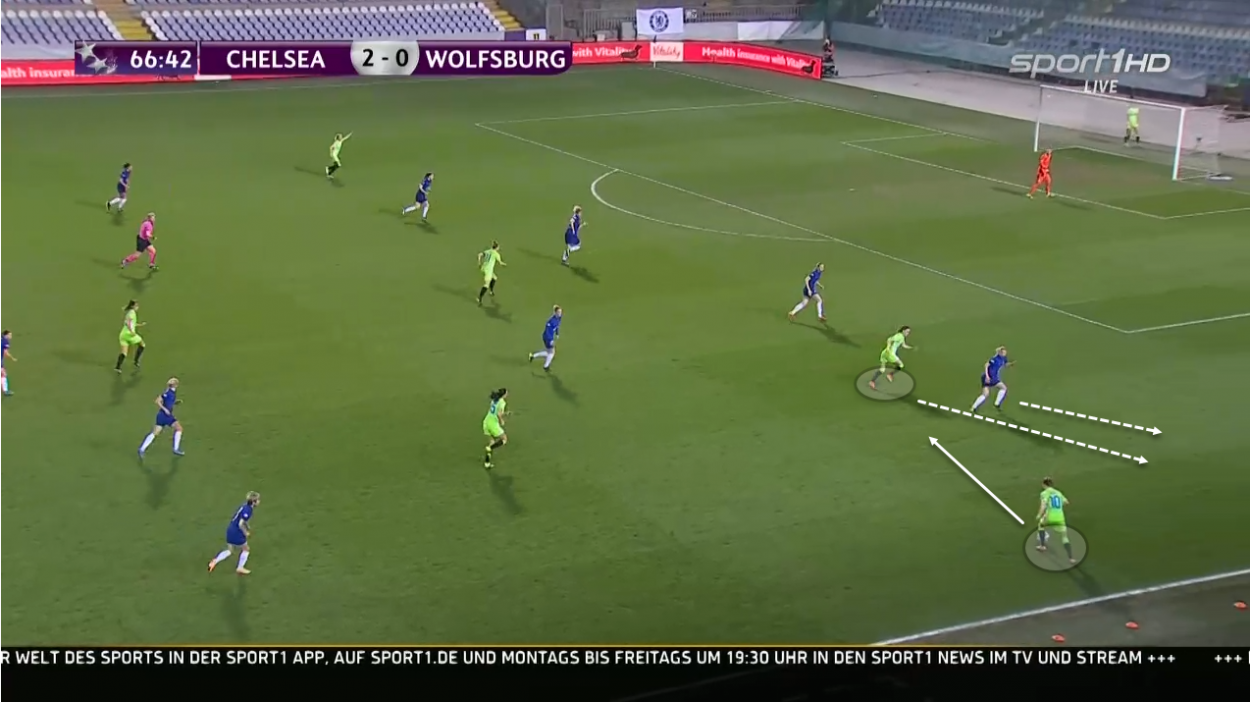 In this situation, Pajor moves out to the right channel and makes a move towards the right side as Huth receives the ball. This takes Andersson away from her position and opens up space for Huth to drive into. This ensures the winger has enough time and more space to choose her next passing option.

However, the creme de la creme is surely the lead-up to Wolfsburg’s first goal which summed up their game plan perfectly. The move from start to finish included all aspects of their strategy which drew the foul from Eriksson. 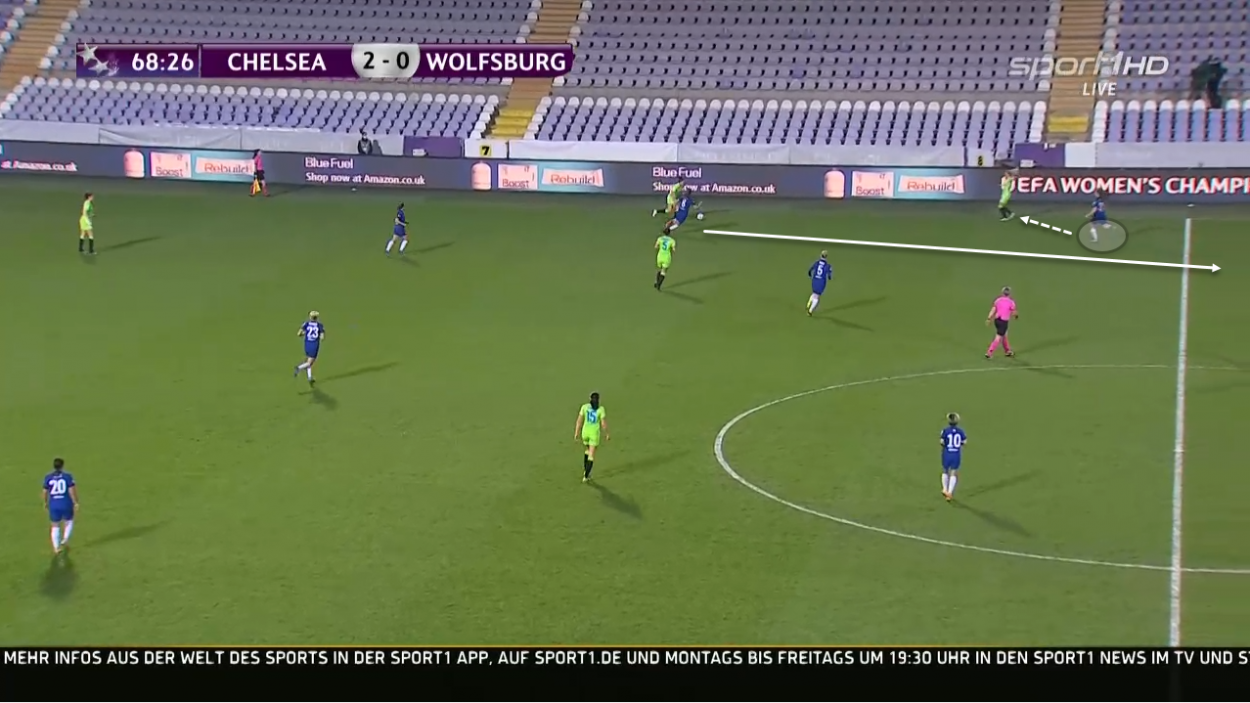 Sara-Doorsoun Khajeh looks for a forward pass and has Rebecka Blomqvist as a passing option which draws Charles high up the pitch. 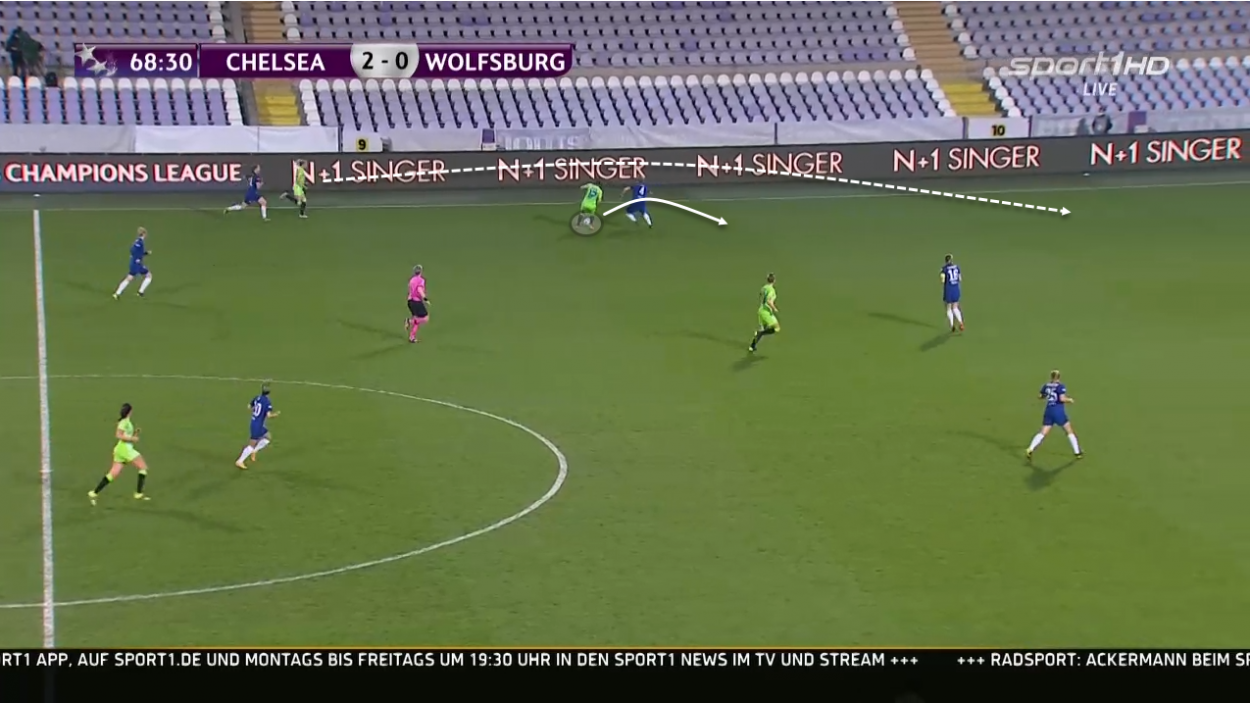 The ball is instead played straight to Pajor in the channels who now attracts Millie Bright across, but more importantly, presents an opportunity for Blomqvist to take advantage of the vacant space in behind.

The Swedish winger races away from Charles and thanks to Pajor’s excellent hold-up play, takes the ball in her stride and gets to the byline. 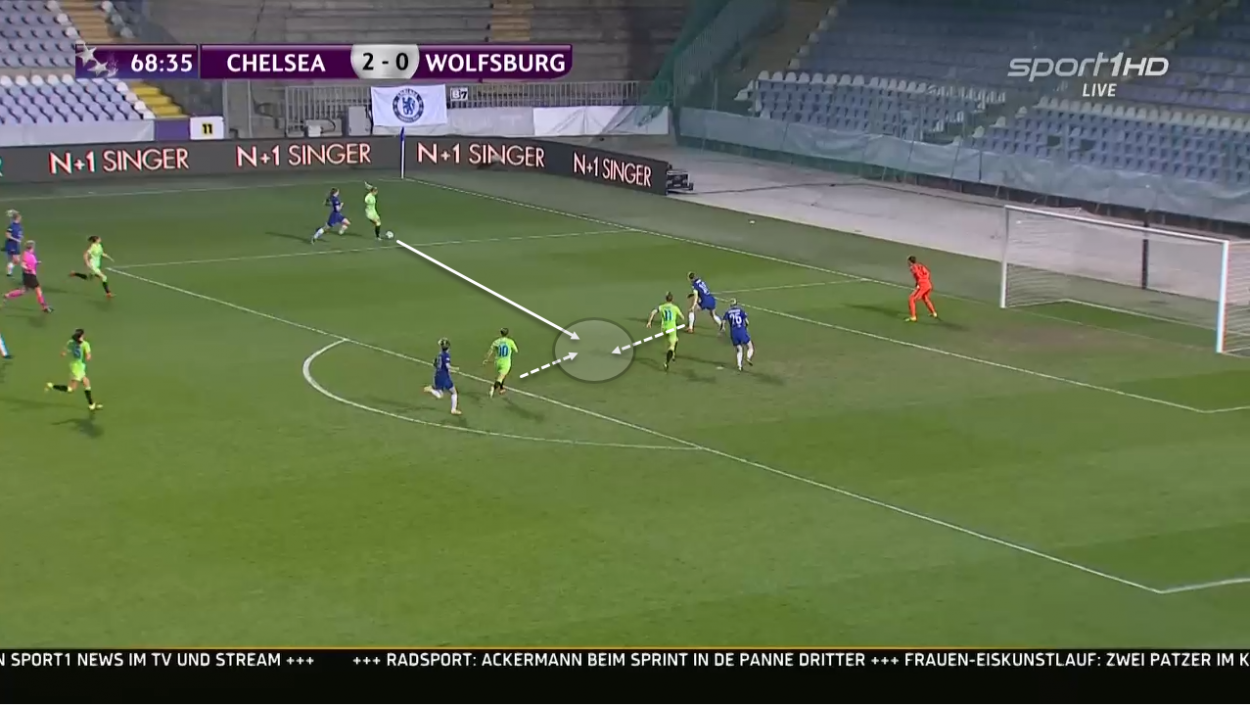 The amount of space available in the box is borne because of Wolfsburg’s ability to move Chelsea’s players out of position. With Chelsea so high up the pitch, they weren’t quick enough to track back and cover the space which allows Huth to run across and force Eriksson into committing a risky foul which gives away the penalty from the resulting cross.

It’s astonishing to see the final result. Given Wolfsburg’s plan and execution was so well done, it’s unfortunate for the German club to walk away without the win.

However, they can take solace in the fact that they are the first team to cause Chelsea some real discomfort this season and have an away goal to show for it.

Emma Hayes will have a game plan ready, but the blueprint to beat Chelsea is there. If Wolfsburg can replicate this performance on Wednesday, then we could be seeing a dramatic turnaround from a team expected by many to give way to Chelsea. Can the Wolves turn it around? It’ll need the pack to dig deep once again.