Wolverhampton Wanderers will look to end a run of five games without a win when they travel to relegation-threatened Fulham on Friday night.

Wolves have not earned three points since the 19th February when they beat Leeds United 1-0 at Molineux in their last Friday night game, but since then they have only managed to pick up two points from a possible 15.

Meanwhile, the Cottagers who sit three points adrift of the relegation are not in the best of form themselves as they have lost each of their last three games and will be looking to avoid a fourth consecutive defeat for the first time since the beginning of the season.

Could return to three at the back following Hammers defeat

On Monday night, Nuno Espírito Santo opted to go for a four at the back with Conor Coady and Romain Saïss being used as the centre backs with Nelson Semedo and Rayan Aït-Nouri being utilised as right and left full-backs retrospectively.

This was a decision that Nuno may have regretted, particularly in the opening 38 minutes as the Wanderers backline were opened up on a number of occasions through the quality and energy from the likes of Jesse Lingard and Michail Antonio.

Therefore, against a side that are currently fighting for their lives at the back end of the table, Santo may want to revert back to his familiar three at the back formation in order to gain a more solid and sturdy defensive structure.

Saying that this may not be an option for the Portuguese boss due to how regular centre back Willy Boly remains unavailable after having tested positive for Covid.

Consequently, if they were to do this it would mean there would be a start for Max Kilman but this seems unlikely since the 23-year-old has not made the starting fold since the start of February.

With this in mind, due to Boly being absent and in the interest of trying to gain consistency it is likely that Santo will stick with the four at the back so they can learn and attempt to fix the defensive mistakes that they made on Monday night.

The club's record signing Fabio Silva, who so far this season has made 24 appearances in the top-flight, came on against West Ham United as a half time substitute.

This switch by Nuno actually made a difference as the 18-year old provided the Wanderers with a lifeline as his impressive run, touch and finish in the 68th-minute strike brought the scoreline back to 3-2.

His overall play with the threat of his energy and pace gave the Hammers something to be concerned about in the second half and it could be argued that Wolves were slightly unfortunate to not come away with a point.

Silva has in fact looked bright when coming on from the bench in recent games and his goal on Monday night may be enough to tempt Santo to give him a starting place at Craven Cottage.

This is especially since Willian José who has started in 9 of the 11 league games that Wolves have played in since the Brazilain joined the club on loan in January, has failed to really impress as he has not made any goal contributions as of yet.

Therefore, there may be an opportunity for Silva to prove his worth against Scott Parker's side with a start and potentially solidify his place as Wolves' main striker for the remainder of the season.

Going into the clash, Fulham have never lost against Wolves at home in the Premier League in the five games that they have played at Craven Cottage since the league was founded in 1992.

In fact, Wolves will be looking for a win against the Cottagers for the first time in the top flight since 1967 and they will be confident that they can achieve this, considering that they have won 8 of the last 11 league encounters against Friday's opponents.

The only time that the Wanderers have actually lost against Fulham in this run was back in February 2018 when strikes by Ryan Sessegnon and Aleksandar Mitrović sealed a 2-0 win at Craven Cottage.

Fulham will be desperate to end this current bad run of form against Wolves though as they will surely see this a win at all costs game, due to them only having seven games remaining to save themselves.

Not only that but in that time they still have to travel to Arsenal, Chelsea and Manchester United, so with these games in mind, if they do not earn three points tomorrow night the drop-down to the championship looks the ever more likely outcome.

Post-Match Analysis: A last-gasp, snatch and grab for Wolves 2 days ago

Claire Hakeman on this special Wolves team, making memories and rising up the leagues a day ago

Fulham v Wolverhampton Wanderers Preview: How to Watch, Kick-off Time, Team News, Predicted Line-ups and Ones to Watch 4 days ago

What should Wolves do with Rafa Mir? 5 days ago 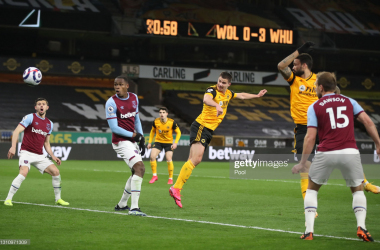 The Warmdown: A slow start from Wolves costs the home side three points 7 days ago
//